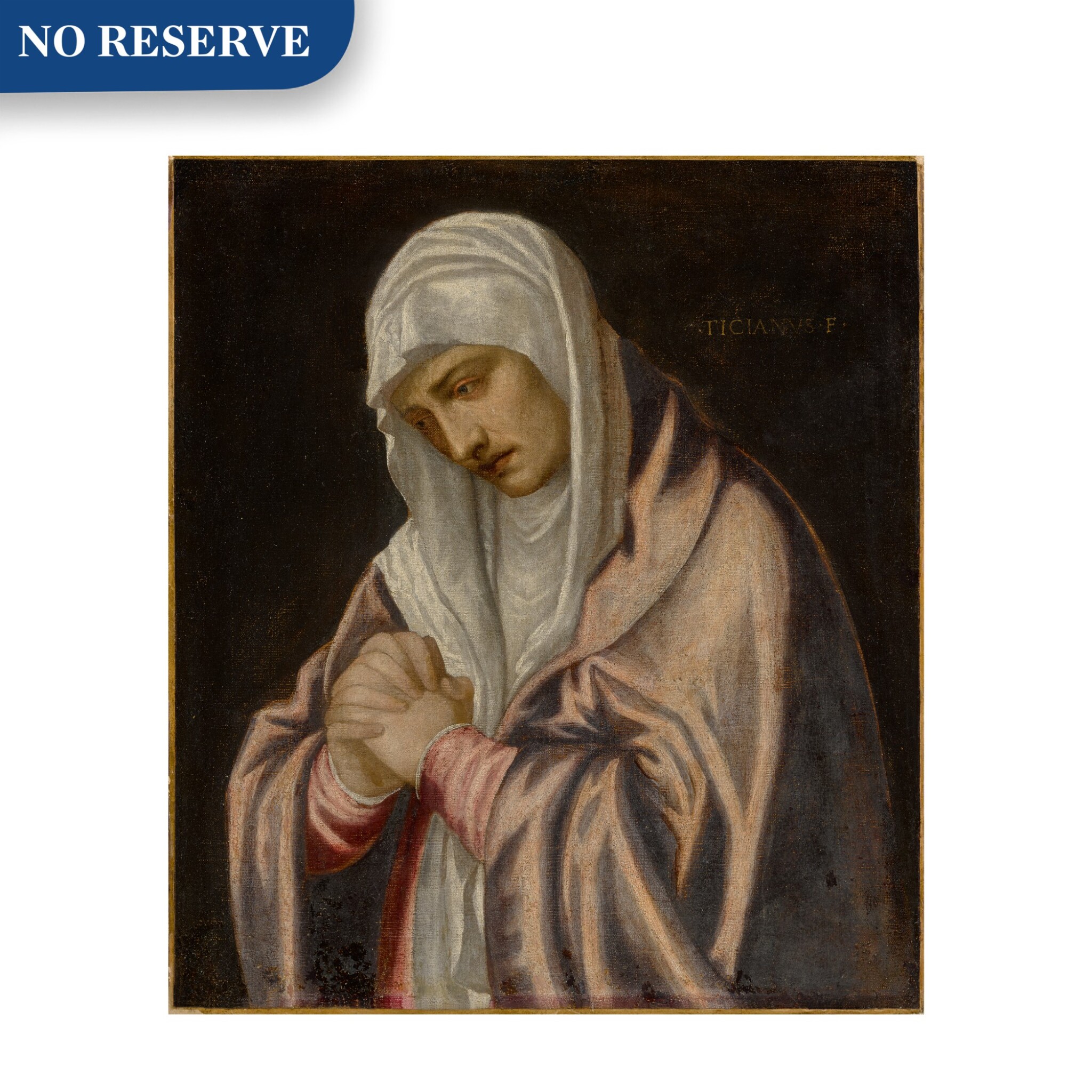 The canvas is strip-lined and stable on its stretcher. The image reads well beneath old varnish with a few areas that have thinned, such as to the right of Mary's head near the inscription. Some retouching has discolored and is visible to the naked eye, such as at the lower left and right corners, and a patch to the left of Mary's head. Under UV inspection, the aforementioned spots are visible, as well as a larger patch in the black background on the right side, and a few spots in the hands. Most of the retouching is visible to the naked eye and is not distracting to the central figure. Offered unframed.

Titian and his workshop treated the subject of the Mater Dolorosa on numerous occasions, varying and reworking the pose of the Virgin, the colors used, and the overall dimensions of each work.1 Two of Titian's earliest known examples of this theme, painted between 1553-1555 for Emperor Charles V, are today in the Museo del Prado in Madrid. One shows the Virgin with hands clasped looking to the left,2 while the other with her hands apart looking downwards.3 Both were originally conceived as possible pendants to the Emperor's Man of Sorrows painted on slate by Titian in 1547,4 and both served as a visual reference point for the other versions that arose from within and around Titian's studio.

By about 1555, Titian reconceived his Mater Dolorosa, as well as his Man of Sorrows, probably for Philip II, Charles V's son. The Virgin in this newly conceived pairing was shown with hands clasped and head downturned with tears in her eyes. The only autograph version of this composition known is the painting formerly belonging to the Diocese of Brooklyn that sold at Christie's, New York, 6 April 2006, lot 64.  It is this slightly later iteration of the Mater Dolorosa to which the present example relates. Numerous copies of this version of this composition are known from Titian's workshop and circle, as are two engravings and a detail in David Teniers' painting of Leopold Wilhelm's Picture Gallery, now in the Kunsthistorisches Museum, Vienna.5

1. For the most recent and in-depth exploration of Titian's Mater Dolorosa series, see P. Joannides, "Paintings of the Man of Sorrows by Titian and his Studio, II," in Colnaghi Studies Journal, 6 March 2020, pp. 35-65.