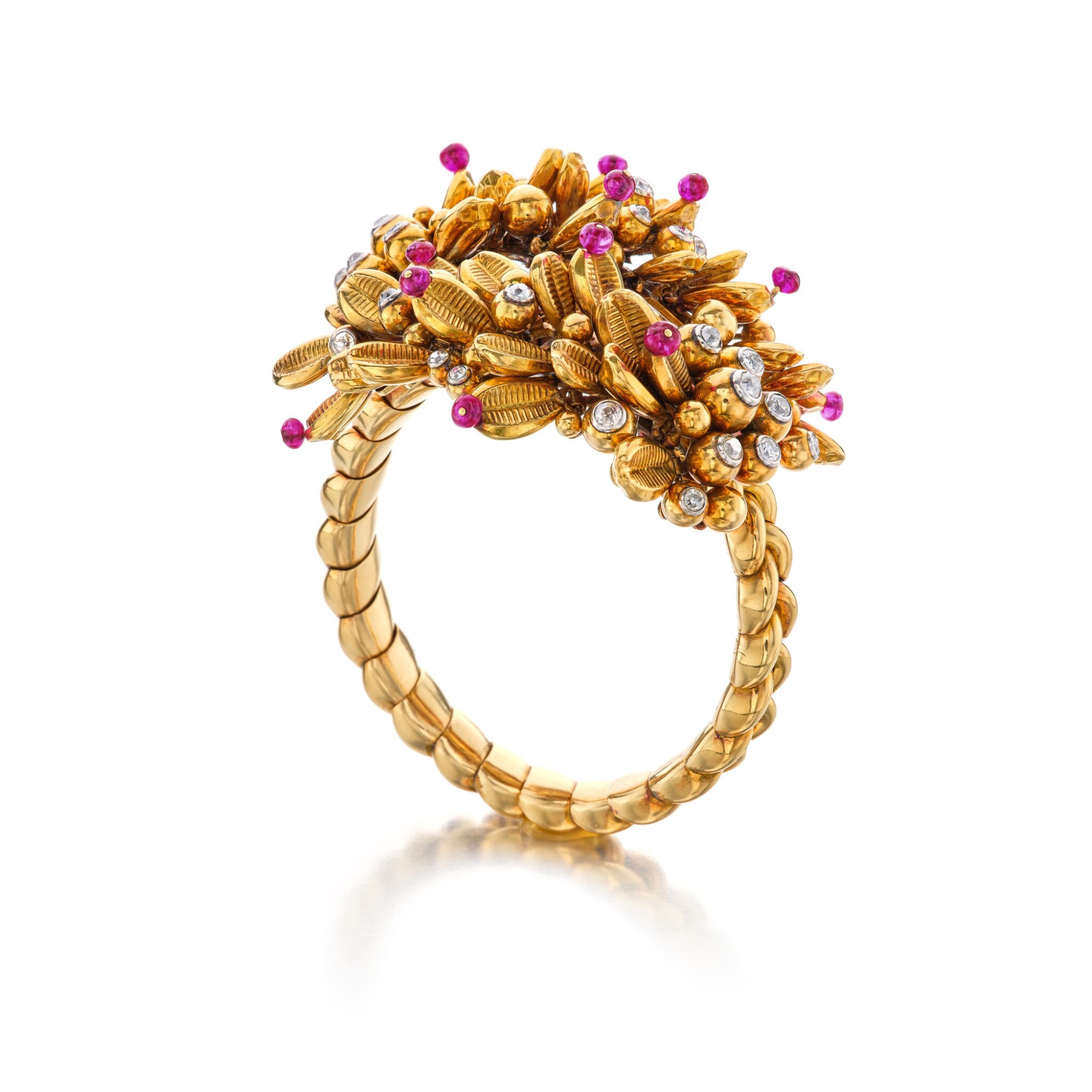 In good condition, especially given the age of the piece, the mounting with light scratches and patina commensurate with age and wear, and a few small areas of discoloration, the reverse with evidence of solder, not visible when worn. One bean motif and two gold boules missing from terminal clusters, noticeable upon close inspection. French assay mark for 18 karat gold. The diamonds, estimated to weigh a total of approximately 2.60 carats are approximately G-J color, VS-SI clarity. The rubies are medium to medium deep slightly purplish red, moderately to heavily included, with scattered chips, as is typical of beads. Fits a small wrist.

In response to your inquiry, we are pleased to provide you with a general report of the condition of the property described above. Since we are not professional conservators or restorers, we urge you to consult with a restorer or conservator of your choice who will be better able to provide a detailed, professional report. Prospective buyers should inspect each lot to satisfy themselves as to condition and must understand that any statement made by Sotheby's is merely a subjective qualified opinion. Illustrations in the catalogue may not be actual size. Prospective purchasers are reminded that, unless the catalogue description specifically states that a stone is natural, we have assumed that some form of treatment may have been used and that such treatment may not be permanent. Our presale estimates reflect this assumption.Certificates of Authenticity: Various manufacturers may not issue certificates of authenticity upon request. Sotheby's is not under an obligation to furnish the purchaser with a certificate of authenticity from the manufacturer at any time. Unless the requirements for a rescission of the sale under the Terms of Guarantee are satisfied, the failure of a manufacturer to issue a certificate will not constitute grounds to rescind the sale. Gemological Certificates and Reports: References in the catalogue descriptions to certificates or reports issued by gemological laboratories are provided only for the information of bidders, and Sotheby's does not guarantee and accepts no responsibility for the accuracy, terms or information contained in such certificates or reports. Please also note that laboratories may differ in their assessment of a gemstone (including its origin and presence, type and extent of treatments) and their certificates or reports may contain different results. NOTWITHSTANDING THIS REPORT OR ANY DISCUSSIONS CONCERNING CONDITION OF A LOT, ALL LOTS ARE OFFERED AND SOLD "AS IS" IN ACCORDANCE WITH THE CONDITIONS OF SALE PRINTED IN THE CATALOGUE. (edited)

For a bracelet of identical design, see Amazing Cartier, Jewelry Design since 1937 by Nadine Coleno, page 110.

As an art and architecture historian, Marsha Miro demonstrated how critical attention to design transformed and illuminated her collection of jewelry. Her career as an art historian began in 1968 as a gallery assistant at the Gertrude Kasle Gallery in Detroit. There she had the opportunity to work with artists such as Philip Guston, Adolph Gottlieb, Helen Frankenthaler and Robert Motherwell. As an architectural historian from 1995-2005 at Cranbrook Educational Community, a national historic landmark, Miro documented new buildings by architects Steven Holl, Tod Williams, Billie Tsien, and Rafael Moneo, among others. She also wrote as an art critic for the Detroit Free Press for more than 20 years, striving to erase the barriers between the fine arts and other visual media, a view that informed her aesthetic when she began collecting jewelry in the 1980s. The synergy that led Raymond Templier to make a brooch that is a geometric abstraction and that inspired Fulco Verdura to use the abstract shift of color in nature to organize gemstones in a collar was a highly creative and important step in the evolution of the art of jewelry. Her career also included founding and becoming the Founding Director of the esteemed Museum of Contemporary Art Detroit. Miro used her bedrock belief in creativity to establish an institution that helps reinforce creativity in the community, commenting “I’ve always believed art is critical for everybody, not just the artists, the people who can afford to buy it or those initiated in the intellectual ramifications of it. Art adds so much to you as a human being.”

Marsha Miro followed this philosophy when acquiring her jewels, highlighting the importance of exceptional design. Her collection represents the progression of jewelry as an art form from a major turning point around 1900 through the mid-twentieth century. A pivotal point in this progression was the opening of Samuel Bing’s La maison de l’art nouveau in December 1895 and the special pavilion at the Paris exhibition of 1900 where works by various artists were displayed reflecting a new philosophy in design. The emphasis was placed on graceful, curvilinear forms found in nature, the female figure, the use of new techniques and materials, and often there was an underlying theme of transformation or state of metamorphosis. The gold, diamond and enamel brooch by Gaston Lafitte illustrates these concepts by centering upon a female nude, arms outstretched with delicate wings of transparent and opaque enamel, seemingly in a state of transformation, surrounded by a vinous, curvilinear outline of tiny diamonds. The gold and plique-à-jour enamel bracelet by Lucien Gaillard is a series of ginkgo leaf branches in various stages of blossom to decay, with dew drop-like rose-cut diamonds sprinkled throughout, each branch bursting forth from the confines of a rigid framework of gold links. Both these jewels spoke to the spirit of a new age, but inevitably styles and tastes began to change with the approach of the 1920s.

With the end of World War I, the 1920s ushered in the “modern” era, when trains, planes and automobiles changed lives in unimaginable ways. Jewelry was influenced by the changing technology and became more architectural in design. For example, the introduction of the escalator in public transport stations and department stores inspired geometric-like patterns, such as Boucheron’s ‘Escalier’ (moving staircase) bracelet with its raised step-form links that are articulated like a gear mechanism. Evelyn Posséme summarized the transition in this way: “While Art Nouveau favored bijouterie, jewelry that predominantly used precious metals, Art Deco saw the rise of joaillerie, which made use of gemstones…large and translucent pieces of amethyst citrine or aquamarine…contrasted with boldly colored opaque materials such as onyx, jade lapis lazuli or coral.” In L’Art Du Notre Temps, Raymond Templier wrote: “a piece of jewelry is above all, dark and light not just about sparkle.” The aquamarine and diamond brooch in the Miro Collection is the definition of an Art Deco jewel, with its elongated structural form, contrasting gray metal and black enamel structure, it is highlighted by a section of white diamonds and counterbalanced by an elongated aquamarine crystal.

There are two additional pieces in this collection that vibrantly express “Art Deco” design. One is the coral, onyx and diamond brooch by Cartier, circa 1925. This piece was constructed around the time of the famous 1925 Exposition internationale des arts décoratifs et industriels from which the shortened term arts décoratifs or “Art Deco” later was coined. The second is the pair of emerald and diamond earrings, also circa 1925. Not only were these designed to suit shorter hair styles of that time, but the carved emerald pendants also hint at the relationship forged by Pierre Cartier with the Indian Maharajas who were trading such stones in favor of updating their jewelry with a more modern design aesthetic.

In the late 1930s and early ‘40s, Cartier began to adopt a bolder aesthetic as noted in the gold and citrine necklace and pair of earclips of 1937 and the pair of gold, citrine and diamond earclips around 1940. Cartier’s ‘Coffee Bean’ bracelet of 1938 was one of a series of jewels (bracelets, earrings and necklaces) which pay a unique tribute to the history of the bean. As Nadine Coleno remarks in her book “Amazing Cartier” these jewels may also have been a nod to New York Café Society and the extravagant parties held by society hostesses such as Elsa Maxwell who invited people who were “full of beans.” These jewels presaged a trend that was to persist during World War II and throughout the 1940s, when platinum had been usurped for the war effort, and semi-precious stones such as native sapphires, garnets, zircons and moonstones had become widely accepted in fine jewelry.

Fulco di Verdura, an Italian count who had designed for Chanel, opened his own jewelry business in New York in 1939. Verdura’s multi-color zircon bib necklace of 1942 adheres to the constants in his work; that the seemingly random placement of stones creates a sense of depth which add to the fully realized, sculptural quality of his colorful design. Paul Flato, the Texas-born jeweler who would later become known as “jeweler to the stars,” was introduced to Verdura by fashion editor Diana Vreeland and the two quickly became friends and collaborators; both were social butterflies in New York and abroad, and both were extremely clever and very charming. Flato and Verdura shared many of the same interests and this was reflected in the variety of the thematic jewelry they designed. Flato’s strawberry brooches circa 1940 demonstrate his experimentation with different colored stones and setting styles, after his having been so focused on diamond jewelry in the 1930s.

Suzanne Belperron, a pioneer of innovative jewelry created jewels so distinctive, spanning several decades of the twentieth century, did not feel the need to bear her mark or signature and thus spurred her famous quote: “My style is my signature.” The voluptuous gold and diamond leaf brooch attributed to Belperron is akin to the Nike “swoosh” in its simplicity of form while it conveys an abstract quality that is present in all her work.

Marsha Miro’s carefully selected group of jewels show, in her own words, “an important step in the evolution of the art of jewelry…tracing the continuum of innovation” over the better half of a century. Her intention is clear: “The art of jewelry is not about precious stones, but the vision and inventiveness to use the materials to make sculpture that is beautiful and wearable.”