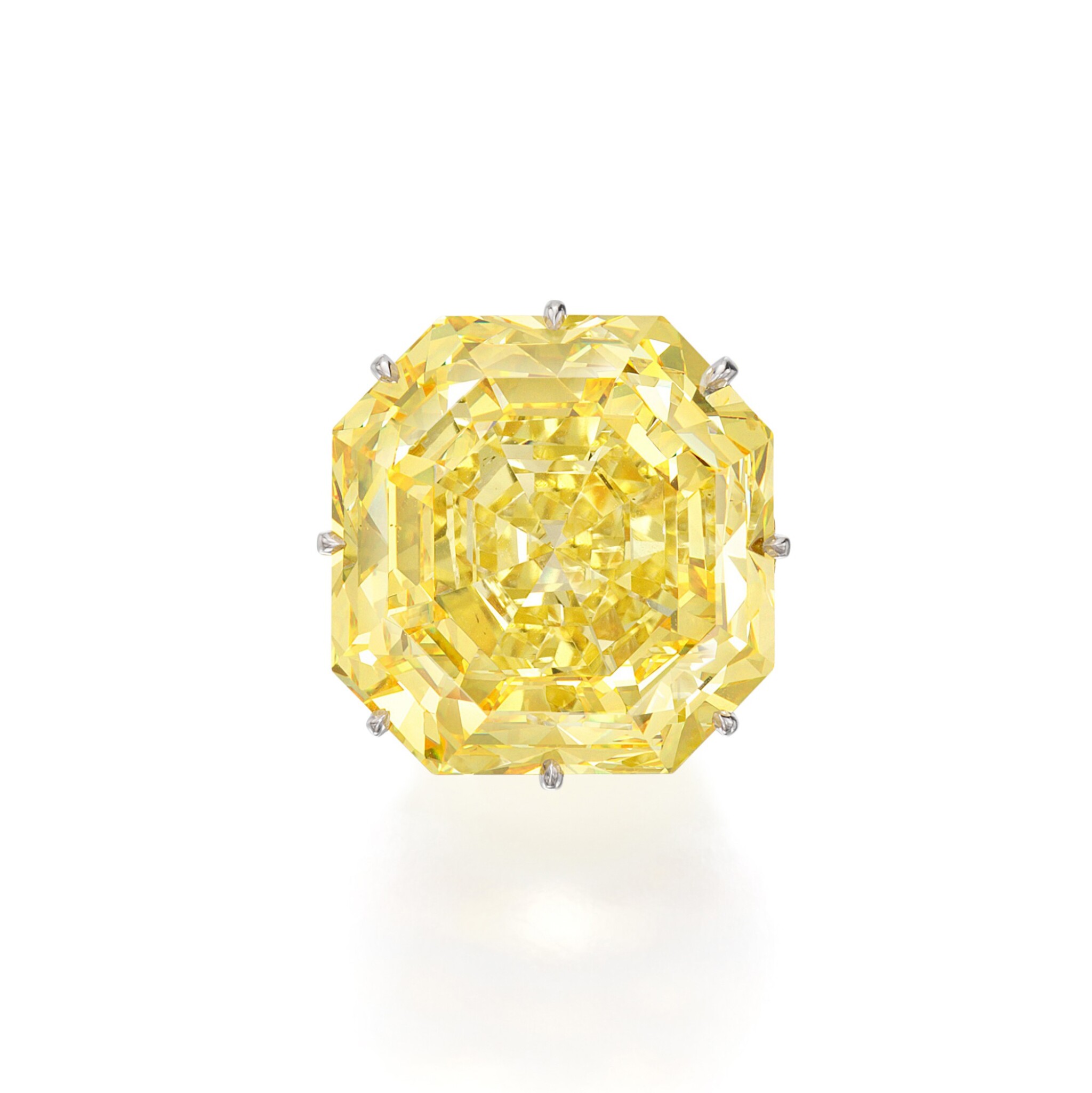 In excellent condition. Mounted in 18 karat (white) gold. The basket and openwork, flexible shank set with near colorless diamonds estimated to weigh a total of approximately 4.45 carats are approximately F-G color, VS clarity. Accompanied by GIA report no. 2181800298 dated August 3, 2018 stating that the diamond is Fancy Vivid Yellow, Natural Color, VS2 clarity. Together with a GIA monograph stating that the diamond "with precisely polished facets and refined yet striking shape and cutting style...takes its place as a standout item in the extraordinary world of gemstones."

In response to your inquiry, we are pleased to provide you with a general report of the condition of the property described above. Since we are not professional conservators or restorers, we urge you to consult with a restorer or conservator of your choice who will be better able to provide a detailed, professional report. Prospective buyers should inspect each lot to satisfy themselves as to condition and must understand that any statement made by Sotheby's is merely a subjective qualified opinion. Illustrations in the catalogue may not be actual size. Prospective purchasers are reminded that, unless the catalogue description specifically states that a stone is natural, we have assumed that some form of treatment may have been used and that such treatment may not be permanent. Our presale estimates reflect this assumption.Certificates of Authenticity: Various manufacturers may not issue certificates of authenticity upon request. Sotheby's is not under an obligation to furnish the purchaser with a certificate of authenticity from the manufacturer at any time. Unless the requirements for a rescission of the sale under the Terms of Guarantee are satisfied, the failure of a manufacturer to issue a certificate will not constitute grounds to rescind the sale. Gemological Certificates and Reports: References in the catalogue descriptions to certificates or reports issued by gemological laboratories are provided only for the information of bidders, and Sotheby's does not guarantee and accepts no responsibility for the accuracy, terms or information contained in such certificates or reports. Please also note that laboratories may differ in their assessment of a gemstone (including its origin and presence, type and extent of treatments) and their certificates or reports may contain different results. NOTWITHSTANDING THIS REPORT OR ANY DISCUSSIONS CONCERNING CONDITION OF A LOT, ALL LOTS ARE OFFERED AND SOLD "AS IS" IN ACCORDANCE WITH THE CONDITIONS OF SALE PRINTED IN THE CATALOGUE.

Please note there is an irrevocable bid on this lot.

Accompanied by GIA report no. 2181800298 dated August 3, 2018 stating that the diamond is Fancy Vivid Yellow, Natural Color, VS2 clarity. Together with a GIA monograph stating that the diamond "with precisely polished facets and refined yet striking shape and cutting style...takes its place as a standout item in the extraordinary world of gemstones."

Glenn Spiro’s unrelenting quest for superlative stones—and his unwillingness to settle for less than the best—started early. The East Londoner grew up in a working-class family and left school at 15 to work as a goldsmith’s apprentice at English Artworks, Cartier’s workshop in London. It was there he learned the art of the craft alongside master jewelers. With a propensity for unconventional and bold ideas, Spiro struck out on his own at just 22, opening a small workshop with his partner and friend, Robert Aylett, in London’s famed jewelry district. He worked at the bench and produced commissions from jewelry houses for several years, until the business was acquired.

Spiro describes himself as having been “rough around the edges” when he arrived in the United States in 1992. “I learned how to negotiate with clients and dealers with a certain finesse and charm, and I learned never to go more than 24 hours without responding to an email or call.”

By 2000, Spiro returned to Europe, setting up offices in London’s Mayfair district as well as in Geneva. From these locales, he created elaborate gemstone designs that were sold to some of the most prominent high-jewelry houses. During this period, he opted to remain behind the scenes, creating showstopping designs for other brands. Over time, however, private clients, acquaintances and friends would seek out Spiro for jewelry advice or to commission important pieces. Concurrently, he witnessed a shift in the luxury world: the ever-increasing emphasis on profit favored the creation of “safe” jewels with broad appeal, resulting in a lack of innovation. To be a great designer, boundaries must occasionally be pushed.

After designing for other houses for nearly 25 years, Spiro established his own house, G, in 2014, on Mayfair’s Bruton Street. He quickly established himself as an artist whose designs are at once contemporary and timeless, and always set with exceptional stones.

Lot 91, The Sienna Star, represents a culmination of Spiro’s oeuvre, embodying the relentless pursuit of the world’s finest gemstones with an artistically daring and innovative design. At over 73 carats, the diamond represents one of the largest Fancy Vivid Yellow diamonds to ever come to auction, and it is, in the GIA’s words, “a standout item in the extraordinary world of gemstones.” The ring itself adds a masterful aesthetic. With intricately set pave diamonds and a flexible shank, it complements the central diamond perfectly, creating a piece of truly wearable art.