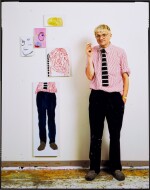 This print is in overall excellent condition. Printed on Fujicolor paper.

Peter Fetterman Gallery, Santa Monica, CA
I love David Hockney’s work and he has popped in to the gallery a few times over the years. This is my favorite portrait of him which captures his inventiveness. and sense of joy like no other I have seen.

He is how it came to be in Jim McHugh’s own words:
"This is the first photograph I took of David when we met in 1984. I began photographing artists in their studios in the early 1980s as a personal project and as a counterpoint to my commercial photography. While photographing Don Bachardy in his Santa Monica Canyon studio, I mentioned that I hoped to photograph David Hockney. Don was very impressed with the portraits I was making and promised to personally phone David and recommend that he sit for me too. True to his word later that day Don called to say it was okay to call and here was David’s private phone number. One of the things I have learned about David over the years is that if you ask him for something, you had better be ready for him to say yes and want to do it immediately.

For one when I called that morning, I wasn’t expecting him to answer his own phone.
Two he said yes and three most unexpectedly “How about today?” Would I photograph him today? I photograph my artist portraits with a large 4x5 view camera, the type where the photographer puts a dark cloth over his head and focuses an upside down, backwards image on a ground glass. I also use strobe lights, all of which requires a lot of equipment and an assistant to help with it all. Since none of this had been organized that morning, I explained to David that I was not prepared to photograph him “today” but could I get organized and call him back to arrange another time?
He agreed. I said thank you and hung up the phone. Immediately I was overcome with regret.

“Are you crazy? One of the most renowned, collected artists in the world, the one you follow avidly happily agreed to let you photograph him today and your answer was “I’ll get back to you ?”.

No hand has ever moved more quickly. I instantly reached for the phone. When David answered I said “Mr Hockney, if it’s still alright with you, I’m on my way, thank you”. With a few calls I found an assistant, my jitters settled, the equipment was loaded and I was on my way up the hill. That was the beginning of forty years of friendship."