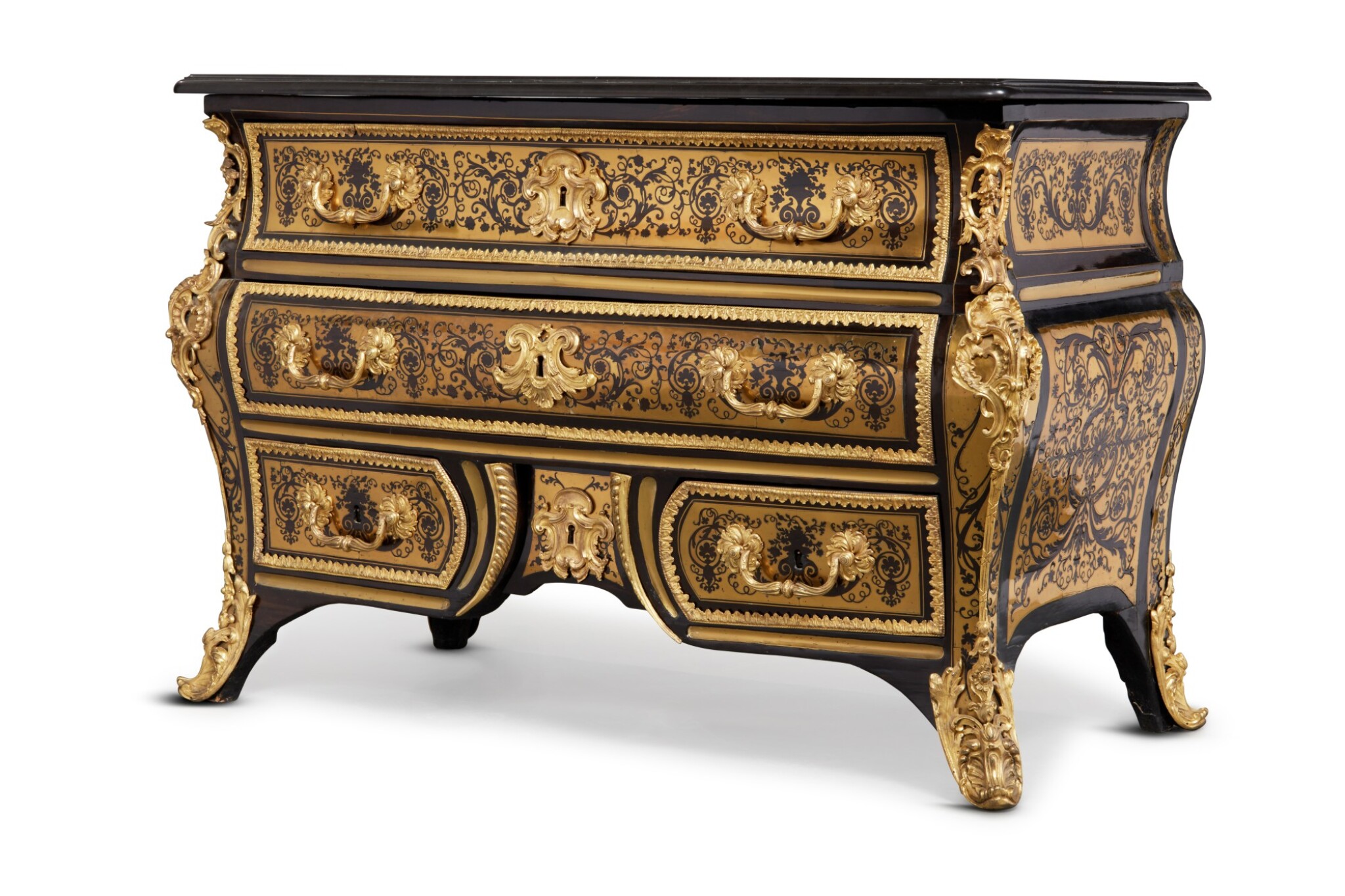 with an associated black marble top; some mounts later

Following the design innovations of the court cabinetmaker André-Charles Boulle during the reign of Louis XIV (d.1715), the Régence period saw the development of a sarcophagus-form chest of drawers called a commode en tombeau. One variation of this model employed a recessed central section on the lower drawer flanked by cornucopia-shaped gilt bronze mounts, referred to as a commode à pont or sometimes more popularly as à moustaches. A distinct group of commodes à pont veneered in Boulle marquetry of brass and tortoiseshell, sometimes with the inclusion of stained horn and mother-of-pearl, and all sharing the same model of foliate angle mounts headed by lion's masks, has survived, and is traditionally attributed to the ébéniste Noël Gérard (d.1736). Recorded examples with two drawers include two in première partie, one formerly in the Kotschoubey Collection and the other sold Sotheby's Monaco, 23 June 1983, lot 290 (ill. Pradère, p.113 fig.70); and two in contre partie, one in the collection of the Victoria & Albert Museum, London and on loan to Longleat House, Wiltshire, and the other sold Koller Zurich, 18 September 2007, lot 1097.

Première partie examples with three drawers like the offered lot include one sold Sotheby's Monaco, 3 March 1990, lot 247; a further two at Drouot, Paris, Joron-Derem and Dillée, 28 February 2003, lots 146 and 147 and another Christie's New York 20 April 2007, lot 141; a contre-partie version was in the Ashburnham Collection sold Sotheby's London, 26 June 1953, lot 117. A few commodes à pont with four tiers of drawers were also produced including an example sold Artcurial Paris, 20 May 2019, lot 28.

Noël Gérard was the son of a tanner and half-brother to the ébéniste Jacques Dubois. He trained as a cabinetmaker himself but appears to have been primarily active as a dealer, and after 1720 emerged as one of the leading marchand merciers of the Régence and early Louis XV periods, establishing his showroom in the former hôtel of the banker and art collector Everhard Jabach in the rue neuve Saint-Merry. The inventory of Gérard's stock taken after his death in 1736 reveals an important production of clock and gilt bronzes but also around 100 pieces of case furniture, of which over a quarter were commodes, some described as en tombeau.

It is likely that Gérard re-sold or subcontracted a significant amount of furniture produced by other ébénistes, and interestingly the most closely related commode to the present lot is a work of almost identical form, size and decoration stamped FL for François Lieutaud (with Galerie Léage, Paris). Both commodes are in contre partie but unlike the corpus attributed to Gérard, these are inlaid more simply with only ebony, without tortoiseshell or horn present. The entire group exhibits a remarkably uniformity in the floral and arabesque inlaid motifs, the most likely explanation for which is the marquetry panels were all commissioned by a single marchand such as Gérard from a specialist marqueteur like Toussaint Devoye (d.1753), who is known to have supplied marquetry panels to other contemporary cabinetmakers, including Nicolas Sageot (d.1731) and Pierre Moulin, who was married to Gérard's sister-in-law.

The bronzes on the offered commode also vary from the models seen on most of the other examples, although Lieutaud, like Gérard, is also known to have skirted guild regulations and produced his own mounts in addition to keeping a stock of standard models. Interestingly, the only other recorded Boulle marquetry commode à pont using brass and ebony without tortoiseshell is a three-drawer première partie version with arabesque inlay and bronze mounts of a very different character.

François Lieutaud (c.1665-1748) was born into a family of sculptors in Marseille and probably became master ébéniste there in the late 17th century, before settling in Paris in c.1709. He was obviously acquainted with André-Charles Boulle. who cited him as an expert witness in legal proceedings in 1719, and he figures among the leading cabinetmakers of the immediate post-Boulle generation working in Paris along with Etienne Doirat, Antoine Gaudreaus and Charles Cressent.