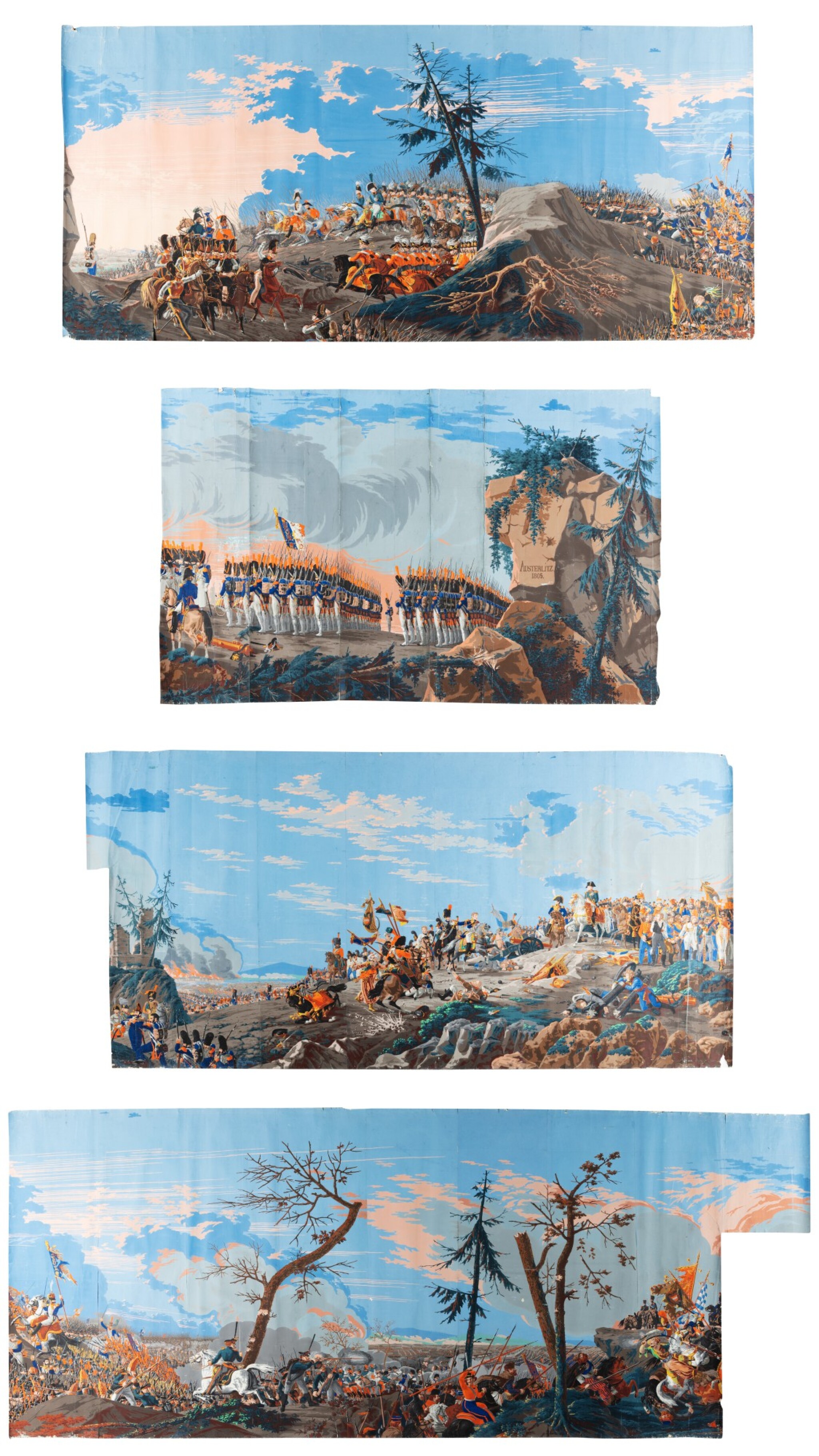 A set of four Empire panoramic wallpaper panels, attributed to Jourdan and Villard, circa 1827-1829

wood block hand printed, depicting The Battle of Austerlitz, title inscribed in pencil on reverse with "no 30 et no1"

Please do look at the dimensions, there are some slight differences in height.

Overall condition is quite fine knowing that it has been used. Traces of vertical folds and crumpled appearance in some places on the panels, consistent with age and expected wear.

Small stains on the surface and small chips. All the borders are worn and sometimes slightly torn but it can be easily hidden as it is on the out borders. Small tears and missing bits on several corners.

All the panels have been pierced with very minor holes about 2 cm below the upper border for fixing. The wider panel has been cut on the right side (see image).

Gifted to the present owner circa 1985 by Nicholas Brown, co-founder of Zoffany wallpapers

This impressive wallpaper depicts the events that took place on 2 December 1805 between the French and the Allies (Austria, Russia, Great Britain and Sweden) and is undoubtedly an incredible painted war diary of the Battle of Austerlitz. These panels also symbolize Napoléon Bonaparte’s victory at Austerlitz and his evolution even after the Emperor’s death in 1821 as a symbol of political liberalism, of social equality and order even through the years of the Bourbon Restoration (1814-1830). Drawing from works by acclaimed French painters of the time, François-Pascal Gérard (1770-1837), Horace Vernet (1789-1863), and Jean-Louis-André-Théodore Géricault (1791-1824), the optical effects of this wallpaper, comprising the juxtaposition of a multitude a three dimensional elements, produce a complete fiction for the viewer, merging art and reality.

THE BATTLE OF AUSTERLITZ

The battle is recorded as Napoléon’s most glorious victory where he defeated Emperor Franz II of Austria, Czar Alexander I of Russia and their English and Swedish allies. Owing to colonial ambitions and economic rivalries, France was at war with England in 1803. An alliance between England, Russia, Austria and Sweden was created in order to prevent a concentration of power on the Continent in French hands and to oppose Napoleon’s territorial advances. In the autumn of 1805, the Austro-Russian coalition opened hostilities, and Napoleon fought back and launched a carefully prepared military campaign. The decisive battle was fought at Austerlitz, a town today called Slavkov, east-southeast of Brno in the Czech Republic.

Even though the wallpaper depicts a more stylized version of the battle, it is important to study this wallpaper with an understanding of French history and with a knowledge of the terrain and the battle itself.

The troops were awakened at 4am with a thick fog covering the battlefields. At 7am, the Allies launched their attacks against Tellnitz and Sokolnitz on the French right side. Fighting back and forth, the villages changed hands over the next two hours, but by nine the coalition forces had pushed the French out of Sokolnitz and Telnitz.

However, at 8am., the mist had begun to rise and Napoleon who was watching the events thus far from the Zurlan Heights had spied the Allied troops moving towards the French right side. He purposely weakened his right handside troops to lure the enemy in closer to the Pratzen Heights where he had positioned about 16,000 soldiers shrouded in fog and wood smoke.

Around 9am., Napoleon gave the signal around 9am to advance on Mount Pratzen, famously adding: “One sharp blow and the war is over.” The Allies lost most of their artillery during the battle for the Pratzen Heights, and developed their last reserve, the Russian imperial guard under the leadership of Grand Duke Constantine (brother of Czar Alexander I). But soon after 1pm, the Russians encountered French chasseurs and a squadron of Mamluks under the French general Jean Rapp, and the Russian imperial guard was destroyed.

Meanwhile, on the French left, attacks had started around 9:30am on the hills of Santon, but the French succeeded to push back the Allies. By 1pm, with the Allied right and centre which had ceased to exist, the French surrounded and pushed forward against the Allied left. By 4pm, the Allies were completely destroyed and their retreat began in confusion and disorder. Two hundred Russian cuirassiers and their commander, Prince Nicholas Griegorievitch Repnin were captured. They were in total 16,000 dead and wounded among the Allies, and 11,000 were captured. The French counted 1,300 dead, 6,490 wounded and 500 taken prisoners.

Overall, the superiority of the French on this day was a result of the Allies’ inferior artillery and their outdated tactical system, lack of leadership, their communication difficulties and of Napoleon’s powerful battle strategy.

THE EXACT ICONOGRAPHY OF THIS WALLPAPER

With these events in mind and upon contemplating the wallpaper, it becomes quite clear it does not record one state of the battle at a certain point in time but rather summarizes individual outstanding phases of the conflict in a continuously unfolding overall view:

Panel 1: Allied troops in defeat on Mount Pratzen. The infantryman in the foreground is inspired by Géricault’s Cuirassier blessé, in the Louvre (in the wallpaper, the figure is reversed and differs from the original in a few details) -fig.1. There is Emperor Franz II of Austria, Tsar Alexander I of Russia and his brother the Grand Duke Constantine. The horseman moving to the left in the foreground is borrowed from an engraving by Géricault, Light Artillery Officer of the Imperial Guard, lithographed by Engelmann, dated 1823 (Rouen, Musée des Beaux Arts, inv.X260. -fig.2)

Panel 2: Attack by the French, in blue uniforms, on the slopes of the Pratzen heights breaking through the fog and the retreat of the Allied forces, before the backdrop of Santon Hill. A French officer is holding the standard of the Empire, with eagle, based after Géricault’s Charging Chasseur dated 1812 (Musée du Louvre). The scene with a Russian soldier on a horse is based on a painting of the Battle of Montmirail by Vernet, dated 1822 (National Gallery, London, acc. no. NG2965 -fig.3). The lower right with a mameluke fiercely fighting the allies, the Russians in green uniforms.

Panel 3: Napoleon on the summit of Mount Weinberg at the moment when General Rapp brings him the news that the Russian emperor’s guard has been crushed, after the painting from 1808 by François Gérard (Château de Versailles, inv. no. MV2765). Napoleon, on his white horse and wearing the plain green and white uniform of a fusilier, is surrounded by his staff: Marshal Louis-Alexandre Berthier to his right, Prince Joachim Murat to this left. Diagonally behind him, is Roustam. A group of Russian prisoners are placed to the right of Murat and the prisoner in the white uniform is most probably Prince Repnin. Rapp extends his arm to show the prisoners following him and all the surrendered Russian flags.

It is only upon close inspection that the wallpaper reveals a great deal of details, down to the facial expressions of the soldiers, some confused, others wounded and to the variety of uniforms preset during the battle, from the plain clothed infantry uniforms to the colorful uniforms of Mamluks and the Cossacks. Some uniforms and other features in the wallpaper such as the military flags however show variants of years succeeding the battle. Additionally, the wallpaper was not designed after exact topographical data.

The success of scenic wallpaper in the first half of the 19th century was founded on a taste for illusion, Given their cost and size, these wallpapers were obviously destined for the well to-do. There is unfortunately sparse historical literature on the Battle of Austerlitz wallpaper. 1814 is often given as the date of production and the Parisian manufactory of Jourdan & Villard is named as its producer. An example formerly in the Carlhian collection carries the inscription “Imprimé par Jourdan et Villard”, no date. However, in her study of this wallpaper, Sabine Thümmler confidently re-date this wallpaper to 1827-1829 based on evidence regarding, for example, the anachronism of certain details in military costume and the type of paper used.

Several examples, 10 so far, are recorded in private and public collections, some severely damaged and in part incomplete:

-Two examples are in Private Collections in Paris

-One example is in a château near Macon

-one in the officer’s casino of the Royal Dal regiment in Rohmmehed, Sweden

-one at Castle Lade Gard in Trondheim, Norway

-one belongs to the Vonderaumuseum in Fulda, Germany

-one in the Museo Napoleonico, Rome