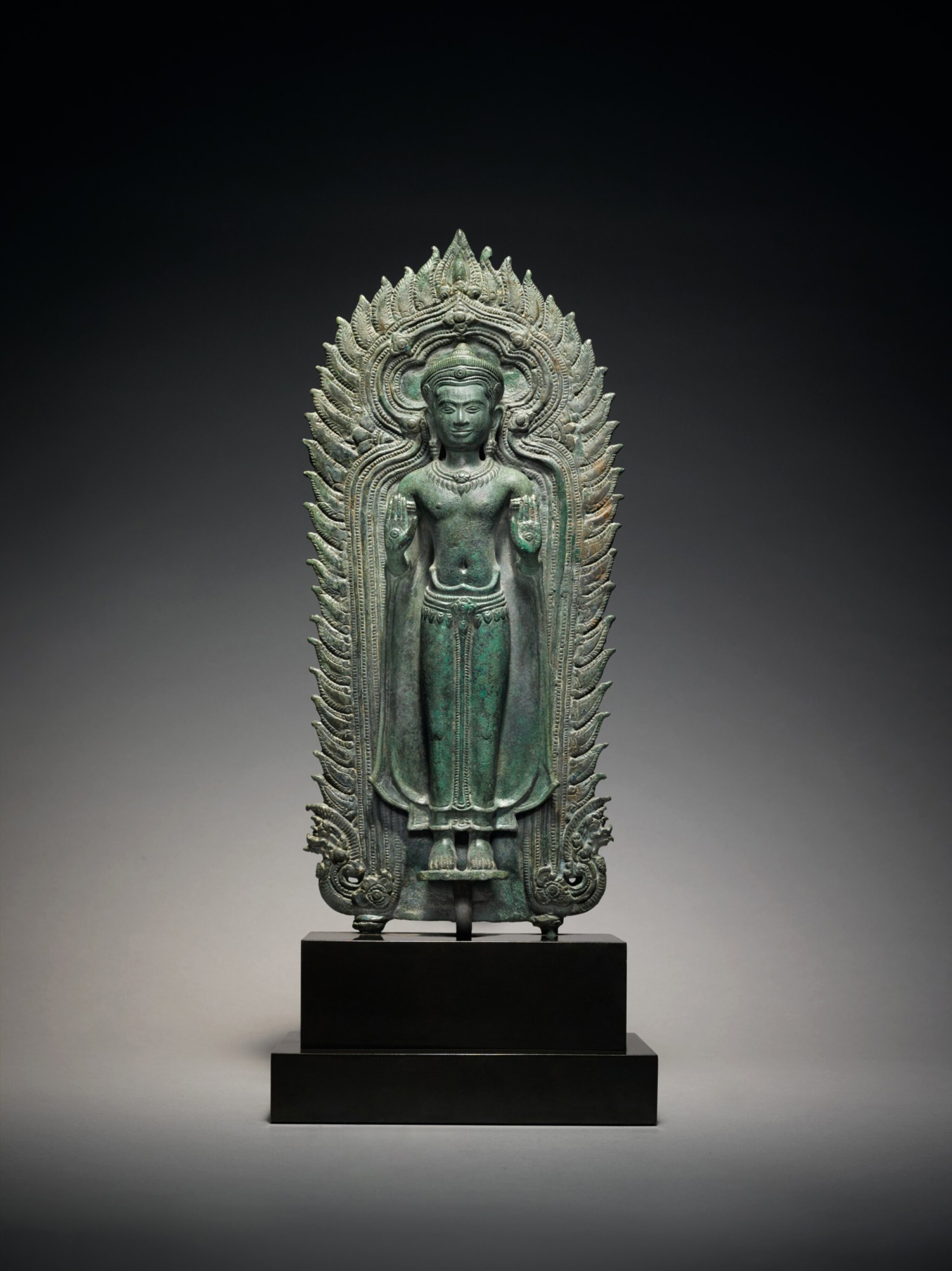 A Fine Copper Alloy Figure of a Standing Buddha

The Buddha standing erect with both palms facing outward displaying abhaya mudra or the gesture of protection. He is crowned and bejeweled with a collar necklace and ornamental girdle around the waist, his long monastic robe or sanghati and his lower garment or dhoti, hugging the contours of his body and falling in gently overlapping pleats at his ankles. He is framed by an intricately cast aureole with flaming finials.

From the mid-tenth up until the thirteenth century, the Khmer empire controlled a large swathe of territory in present-day Thailand, which was strategically positioned along trade routes. Thus, the three hundred and fifty years of Khmer influence, particularly in the Dvaravati province, with its capital centered in Lopburi, largely dominated the art and architecture of the region. Both Mahayana Buddhism and Hinduism flourished at various times and alongside one another under the Khmer rulers, with associated monuments hewing close to the prevailing Khmer esthetic style, as evidenced in temples such as Buddhist Prasat Phnom Phimai and Shaivaite Prasat Phnom Rung.

A close look at the pediment at the eastern entrance gate of Prasat Phnom Rung shows a decorative double ogee mandorla, the outer frame depicting two makaras in the lower corners out of which flames, or plumage, ascends to form an arch. The inner frame shows a beaded border surrounding a decorative foliate motif around the central depiction of a frontally facing Shiva (see R. L. Brown (ed), Art from Thailand, Mumbai, 1999, p. 74, pl. 74). This double frame motif is almost identical to the aureole surrounding the Buddha in the present sculpture, the inner border showing a more simplified stippled pattern interspersed with rosettes around his head.

Portable images of the Buddha in the form of votives and altars were ubiquitous during the reign of King Jayavarman VII (r.1181–1218), who had decreed Mahayana Buddhism as the state religion in Angkor, and who had directly linked himself to the image of the Buddha seated on a naga, as seen in Naga-Enthroned Buddha from the Cleveland Museum of Art (acc. no 1963.263). Altars such as the present sculpture and the one in Cleveland Museum were typically cast in separate parts, the body, aureole and plinth which were joined using metal pins, the base of both which are now missing. Another smaller metal votive showing the seated Buddha sheltered by naga hoods (see R.L. Brown, ibid, 1999, p. 87, pl. 11), from the same region and date as the present sculpture, features the Buddha as the principle image surrounded by a decorative aureole. Portable images, such as these, served as a significant part of the practice for Mahayana Buddhists during this time.

Another crowned Buddha from Lopburi in the Metropolitan Museum of Art (acc. no. 2019.451) from the same period and region in Northeastern Thailand as the present sculpture, reflects a distinguishing trend in Khmer-related art to represent the Buddha as a chakravartin, crowned and bejeweled, a feature usually reserved for representations of bodhisattvas. Both Buddhas wear similar crowns of the Angkor style, a necklace featuring a rosette at center under which fall flaming pendants, a similar motif in the surrounding aureole of the present sculpture, rosette armbands placed high up along the arms and dhotis pulled up high on the sides along the hips.