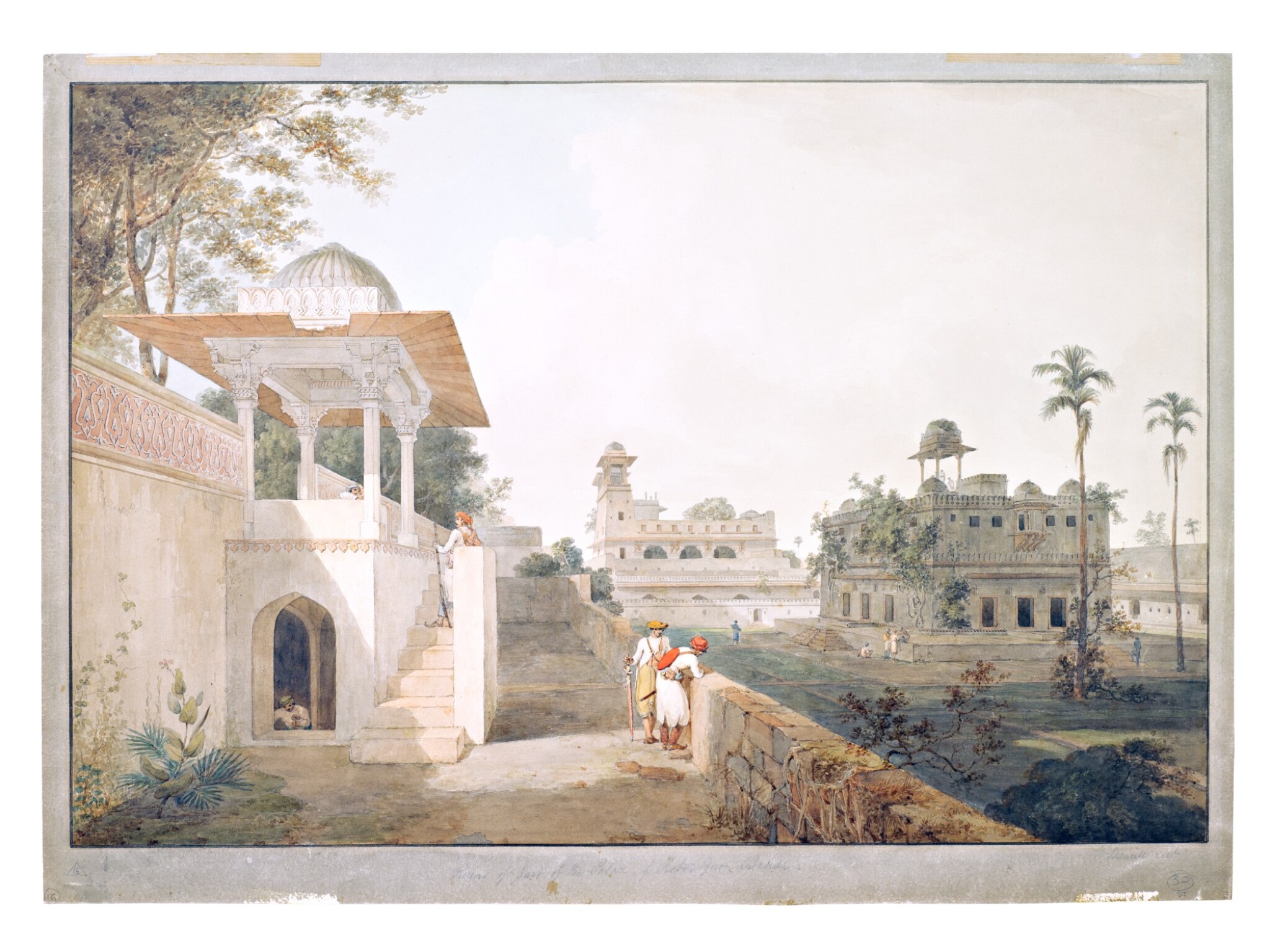 pencil and watercolour on paper, inscribed in pencil in the lower margin at centre ''Ruins of part of the Palace of Rotas Gur. Bahar.'', signed ''W Daniell ...(?)'' at lower right, numbered ''16'' and ''32'' at lower left and lower right

As inscribed by the artist, this watercolour depicts the ruins of part of the Palace Rohtas Garh, a large fortified complex located on the plateau of a steeply rising hill near the Sone river in Bihar. Its existence, which can be traced back to at least the seventh century thanks to an inscription ascribed to that period, experienced several transformations throughout the centuries. In the sixteenth century, the Rajput nobleman Raja Man Singh of Amber (1587-1614), a general under the Mughal Emperor Akbar, and Subahdar (Viceroy) of Bengal and Bihar, renovated this naturally buttressed fortress and built a magnificent palace and Persianate gardens on the site which also included Hindu temples. Notable Mughal architectural elements which are were rarely found in Eastern India include the domed pavilions on the roof tops, miniature balconies and ornate brackets at the top of the columns. The young prince Khurram, the future Emperor Shah Jahan (r.1628-58), took refuge twice in this fort, and one of his sons was born on the site. It was briefly used by the British in the eighteenth century and then left alone for a hundred years before being again a site of fighting during the Indian Rebellion of 1857.

This history, combined with the mythologies surrounding the fortress’s origins and the difficulties of accessing the complex, would have added to the legendary appeal that it would have held for the artists responsible for its depiction here as well as to their English audience. Not only were some of the views that the Daniells painted of India the first ever depictions that appeared in Europe, but as Mildred Archer notes, "it made a completely new contribution to British knowledge of India" (Archer 1980).

Signed by the English artist William Daniell, this watercolour was likely produced during his trip to India in the years 1786-94, accompanied by his uncle and collaborator Thomas Daniell (1749-1840) who was a member of the Royal Academy. Thanks to observations recorded by both artists in their diaries, we know that their visit down the Sone river in February 1790 brought them to the fort where they stayed for a couple of days. It is unclear whether the present watercolour, numbered '16', was painted on site, or later from sketches; the artists also carried a camera obscura with them on their travels.

According to their notes, "Rohtas Garh is the most considerable hill fort in this part of India; it is naturally of great strength, and the weaker parts have been assisted by very strong works" (Archer 1980, no.80). "We found the place altogether so agreeable, that we ordered our camp-equipage to be brought to the fort, within which we pitched our tents, and took possession of an old palace then in a state of great dilapidation, yet sufficiently entire to afford us a satisfactory abode for several days. In consequence of its great elevation, we escaped the general annoyance from reptiles to which all persons who inhabit old building in India are especially liable; in short, there was nothing to disturb the serenity of our repose save the chattering of legions of monkeys which had colonised the neighbouring glen, inhabiting the trees that grew from the sloping sides of the precipice beneath the fort" (The Oriental Annual, 1835, quoted in Archer 1980, no.83).

This is a particularly fine example of their work, as one finds oneself drawn into the composition through a sense of depth and perspective. Standing at eyelevel are figures going about daily tasks, the colours are vibrant and architectural designs detailed, whilst the other buildings recede into the background with a more muted, softer colour palette. Overgrown vegetation has taken over some of the walls. There is both a dream-like yet accurate vision in the artist's rendering of this spectacular complex. William Daniell was elected a full member of the Royal Academy on February 9, 1822.

One of the Daniells most celebrated series was entitled Oriental Scenery and included 144 aquatints that were published in six parts in London from 1795 to 1807. These were based upon their depictions of the picturesque Indian landscape views executed in watercolour and pencil sketches during their travels. Further views of the ruins in Rohtas Garh are illustrated in Archer 1980 (nos.80-83), and an aquatint from this series is now in the British Library (dated 1801, pl.2).

An interesting connection between the Daniells and the artist of the previous lot, Ghulam 'Ali Khan, is discussed by Yuthika Sharma in the exhibition catalogue Forgotten Masters: Indian Painting for the East India Company (Dalrymple 2019, pp.140-2). We know of the Daniells' interactions with local artists through a small number of sketches in their collections which bear attributions to anonymous Indian artists/draftsmen. Sharma focuses on an unfinished sketch of the Hall of Special Audience in the Red Fort of Delhi attributed to Thomas or William Daniell and Ghulam 'Ali Khan’s rendering of the Diwan-I Khas of the Red Fort in 1817 now in the British Library (inv.no.Add.Or.4694) and notes that "The importance of the two views of the Diwan-I Khas also allows us to surmise the extent to which artists from the circle of Ghulam 'Ali Khan had exposure to Daniells' sketches, and whether they were in contact with the duo during their visit to Delhi in 1789) (ibid. p.142).

For further reference on scenes from India painted by Thomas and William Daniell, see Goswamy 2013.