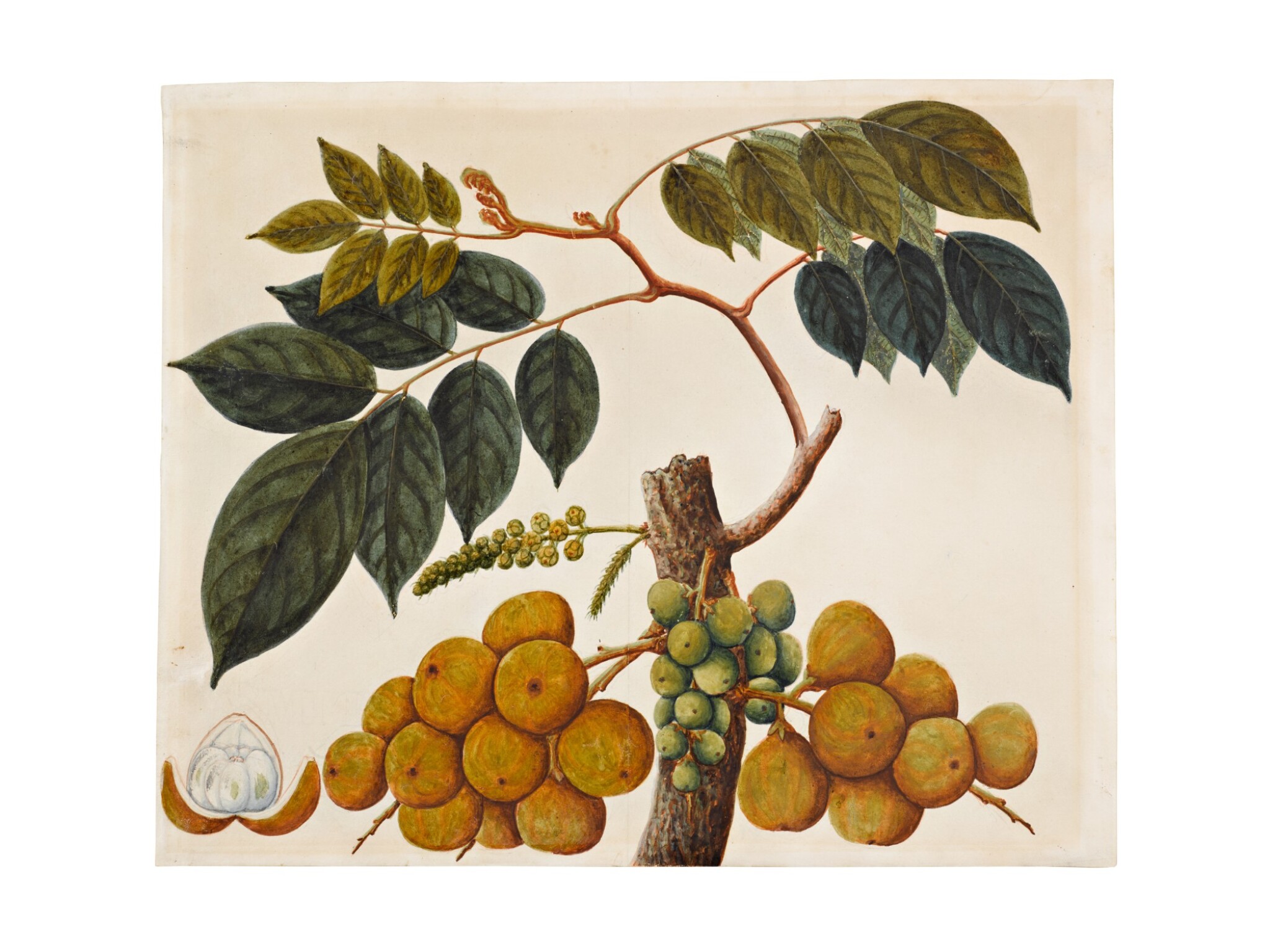 Private collection, U.K.
Bonhams, London, 8 October 2013, lot 271
The term ‘Company School’ is also used to describe the work of Chinese artists for British patrons although these are much scarcer and were produced after their Indian counterparts. The current set of six botanical studies, previously ascribed to Indian artists, can be re-attributed to Chinese artists based on close comparison with similar examples and the botany depicted, most plants and fruits represented being native to South East Asia rather than India. Nonetheless, such attributions have faced difficulties, not only due to the huge influence between both regions through trade, religion and culture but also the fact that the East India Company bases in Calcutta and Madras were central to British activity in the region. In the case of one EIC officer, Richard Parry, we know that he brought Indian artists with him to record the plants and animals during his residency at Bencoolen (1807-11), thanks to the signed works of Manu Lal, native of Patna (Noltie 2009, p.164).

Two of the largest collections of Company paintings by Chinese artists were amassed by Sir Thomas Stamford Raffles (1781-1826) and Major-General William Farquhar (c.1771-1839). Both men were keen botanists, kept menageries, and Raffles stayed with Farquhar in Malacca in 1807-08 where the latter had already commissioned Chinese artists to paint subjects of natural history. Raffles, whose roles led him to travel often around the region, continued to feed his passion and surrounded himself with naturalists and zoologists; he eventually founded a British settlement at Singapore in 1819. Over two thousand drawings are said to have been produced under him, some of which we know through his letters to be intentional duplicates:

'As there was no chance of a direct opportunity, I have sent by the London duplicates, and even more complete sets of the quadrupeds and birds than those sent by the Mary, numbered, named, and ticketed, so as to correspond with my catalogues. I am at this moment superintending a complete set of the drawings, to be forwarded by the present opportunity, via Calcutta. I fear there will hardly be time for completing the duplicates of the catalogue of birds. My writers are now engaged upon it, and I will do my best to send it by the present conveyance…' Lady S. Raffles 1830, p.453, quoted in Archer 1962.

Unfortunately, a major part of Raffles’s collection was destroyed when his boat, the 'Fame', caught fire in 1824, and only a few of the original drawings remain in the collection of the Indian Office Library, London, although some were replaced in the weeks following the fire (together with another set, these are in the British Library and the subject of an illustrated catalogue by Henry Noltie, taxonomist at the Royal Botanic Garden, Edinburgh (Noltie 2009).

The collection of Willian Farquhar comprises 477 paintings commissioned by him during his time as British Resident of Malacca from 1803-18. He was keenly interested in the subject and corresponded with, and sent specimens to, the Marquis Wellesley, Governor-General of India from 1798-1805, another eminent naturalist and collector. Although none of the drawings are signed, it seems probable that some of the same Chinese artists may have worked for both patrons. Farquhar took his drawings collection with him when he left Singapore on 17 November 1827 and donated them to the Royal Asiatic Society in London, which later sold them through Sotheby’s, London, 20 October 1993, lots 291-8. The entire collection was acquired by Goh Geok Khim and donated to the National Museum of Singapore, where it can be viewed as part of a rotational display in the dedicated Goh Seng Choo Gallery (Khim 1999).

The following seven studies represent this interesting fusion of styles, sometimes referred to as the 'Straits style' due to the hybrid Indo-Chinese influences. The plants depicted include: 'Langsat' - Lansium domesticum; 'Sugar-apples' - Annona squamosa; 'Cashew' - Anacardium occidentale; 'Betel nut palm' – Areca catechu; 'Jackfruit' - Artocarpus heterophyllus; 'Rambai' - Baccaurea motleyana; 'Mata Kucing' - Dimocarpus longan (see Noltie 2009, pp.110, 118, 120, 121, 126 for comparable examples from Raffles’s collection, all attributed to Chinese artists; and Bastin and Guan 2015, p.154 and p. 158). It is of further interest to note that an almost mirror-image of the rambai plant is in the British Museum (inv.no.1999,0203,0.57).