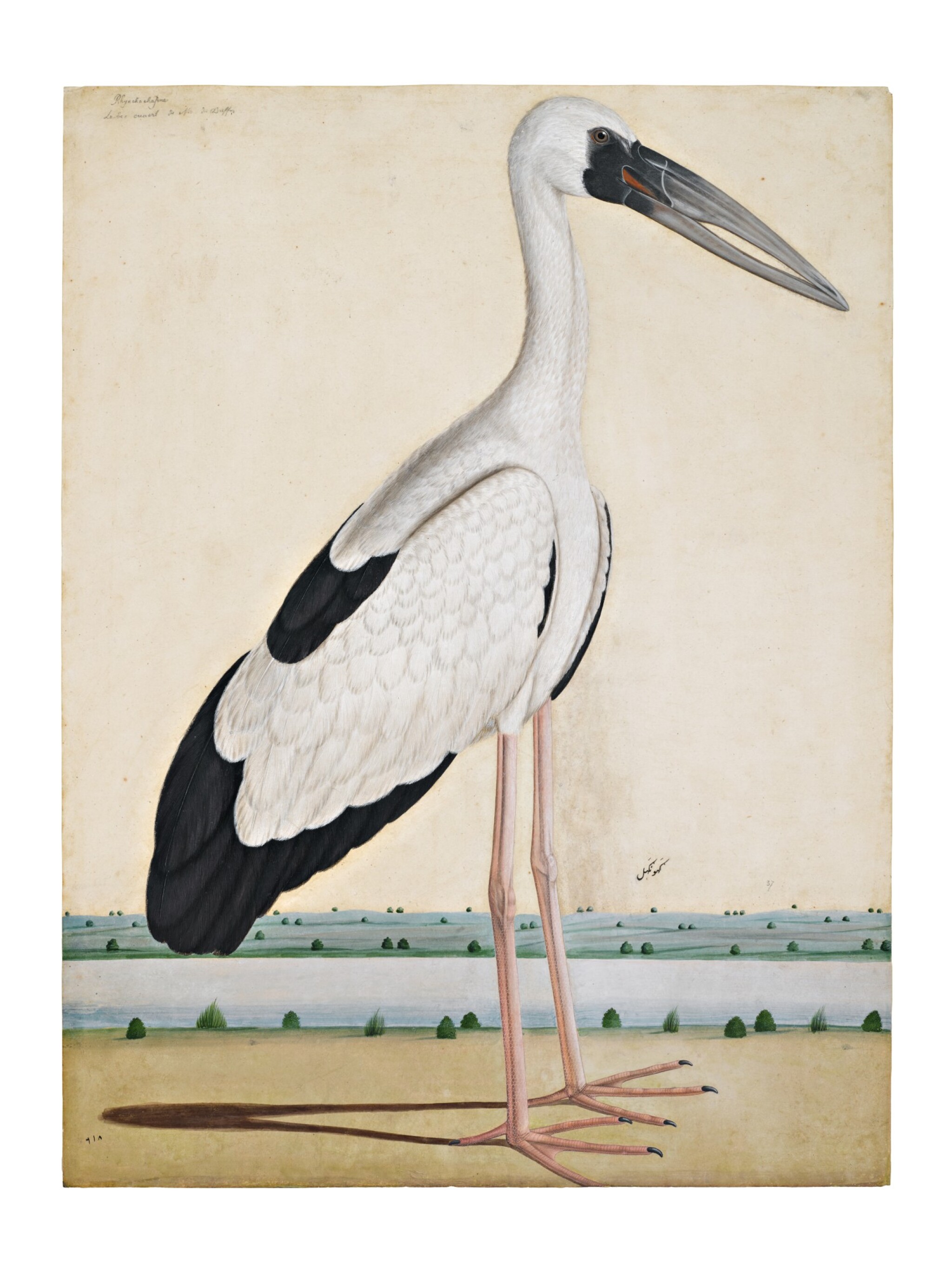 The Asian Openbill Stork is largely white and grey, with black flight feathers, pinkish legs and a distinct stout open bill, as indicated by its name. It is often found in the plains of the Indian subcontinent in freshwater marshes, shallow lakes and paddy fields. It mainly feeds on molluscs.

This impressive illustration of an Asian Openbill Stork was painted in Lucknow, most likely under the patronage of an East India Company official. The large scale of the stork towering over a miniaturised landscape is a characteristic feature of Company School painting at Lucknow in the late eighteenth century. Artists working in Lucknow and Faizabad, such as Mihr Chand and Bahadur Singh, were very receptive to European ideas of rendering space and volume. The receding landscape with the diminutive, scattered shrubs and the shadow cast by the bird are European influences on Lucknow painting of this period. It is worth noting that the artist of the present painting has even depicted the shrubs in the background with their own little shadows. Painting the bird in profile and the meticulous attention given to detail in depicting every feather is a continuation of the artist’s Mughal training. Artists in Lucknow would have been aware of the work of Ustad Mansur (fl.1590-1624), the most well-known painter of natural history illustrations at the Mughal court in the seventeenth century, active during the reign of the Mughal Emperors Akbar and Jahangir.

At the end of the eighteenth century, Lucknow was flourishing under the Nawabs of Awadh. Mughal artists left Delhi and flocked to this rich, cosmopolitan city to seek commissions from the wealthy Nawabs and the East India Company officials. One of the greatest collections of Indian paintings, now in the British Library, was commissioned by Richard Johnson, the deputy of Major William Palmer, the official East India Resident at Lucknow. A portrait of a Turkish mufti painted in a similar style to the present lot, with the figure significantly larger than the river and tiny scattered shrubs and trees in the background, was painted by Bahadur Singh for Richard Johnson in the 1770s (Johnson, I,20; illus. Dalrymple 2019, p.11, fig.4).

Among Johnson’s fellow patrons was the Swiss-French engineer and scholar, Colonel Antoine-Louis Polier, whose collection at Faizabad included several Persian and Sanskrit manuscripts as well as Indian miniature paintings, several of them by the master artist Mihr Chand. The best-known group of natural history illustrations in Lucknow was commissioned by Polier’s friend, Major General Claude Martin who was in the army of the East India Company and the Superintendent of the Arsenal of Awadh. For an illustration of a Lesser Adjutant Stork formerly in the collection of Claude Martin, depicted in a comparable landscape, and for further discussion on Company School painting in Lucknow, see lot 3 in the present sale. For two other slightly later illustrations of birds from Lucknow depicting a White Stork and a Demoiselle Crane, circa 1800, see lots 17 and 18.

An illustration of an Asian Openbill Stork eating a snail by the Impey artist Shaykh Zayn al-Din, dated 1781 and formerly in the collection of the Earls of Derby, is in the Yale Center for British Art in New Haven, Connecticut (acc.no.B2016.26).