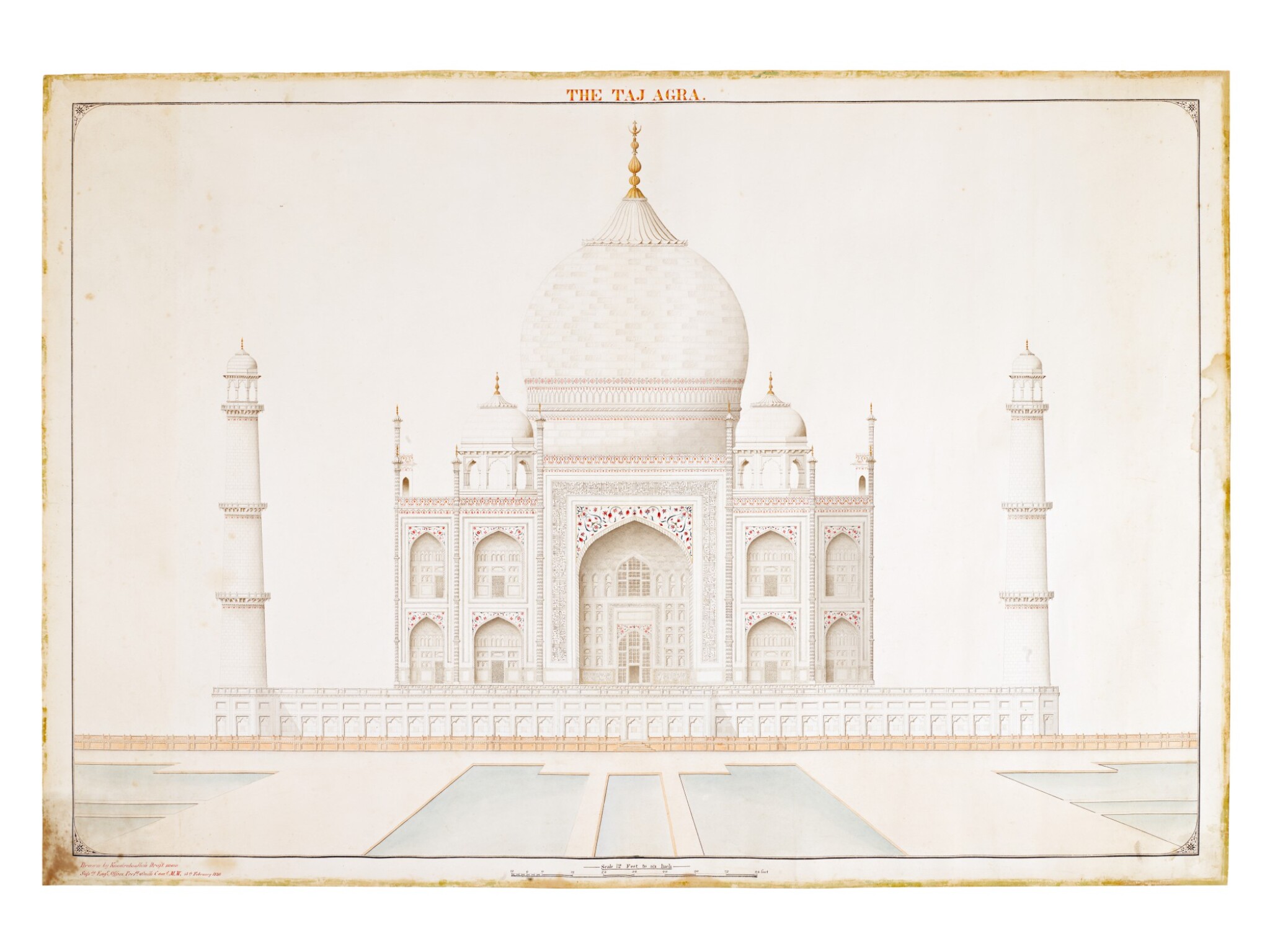 Simon Ray, Indian & Islamic Works of Art, London, 2012
Simon Ray, Indian & Islamic Works of Art, London, 2012, no.76
The Taj Mahal was built as a mausoleum for Mumtaz Mahal by her grieving husband, the Mughal Emperor Shah Jahan, when she died in childbirth in 1632. It took almost twenty-two years to be completed. The present painting is a view of the Taj Mahal as seen from the formal gardens in front of the mausoleum. The red sandstone buildings on either side of the main building – the mosque to the west, and the guest house (mihman khana) to the east – have been excluded. All three buildings sit on a nine-metre high marble and sandstone terrace known as the chameli farsh or 'jasmine floor'.

This frontal view emphasises the perfect symmetry and proportions of the Taj Mahal. The white marble used by Mughal craftsmen lends an ethereal quality to the mausoleum. The façade of the tomb as well as its interior is exquisitely decorated with floral patterns and verses from the Qur’an. The panels of pietra dura inlay at the Taj Mahal are the finest examples of this type of decoration during the Mughal period. For an illustration of the marble screen around Shah Jahan’s and Mumtaz Mahal’s cenotaphs, and a view of the top of Shah Jahan’s cenotaph, which are decorated in the same technique of pietra dura, see lots 19 and 21 in the present sale.

The present painting was executed in Lucknow in 1880 but is in the same manner as the sets of architectural views being produced in Agra in the first half of the nineteenth century. It is also quite rare for the name of an Indian draughtsman to be included. The names of only two Agra artists working on similar architectural drawings in the early nineteenth century are known, Shaykh Ghulam 'Ali and Shaykh Latif. The city of Agra was captured from the Marathas by the British in 1803, who greatly admired the Mughal buildings of Agra, Sikandra and Fatehpur Sikri. Several albums comprising views of Mughal monuments, especially the Taj Mahal, including details of inlaid marble decoration, were prepared by Agra artists for British patrons in the period between 1803 and 1840, reflecting the tastes of the time. Drawings of the Taj Mahal were also prepared to conserve the buildings of the funerary complex. Based on European architectural draughtsmen’s drawings, some of these were sent to London in 1808, where a conservation committee for Mughal monuments had been set up (Dalrymple 2019, p.149).