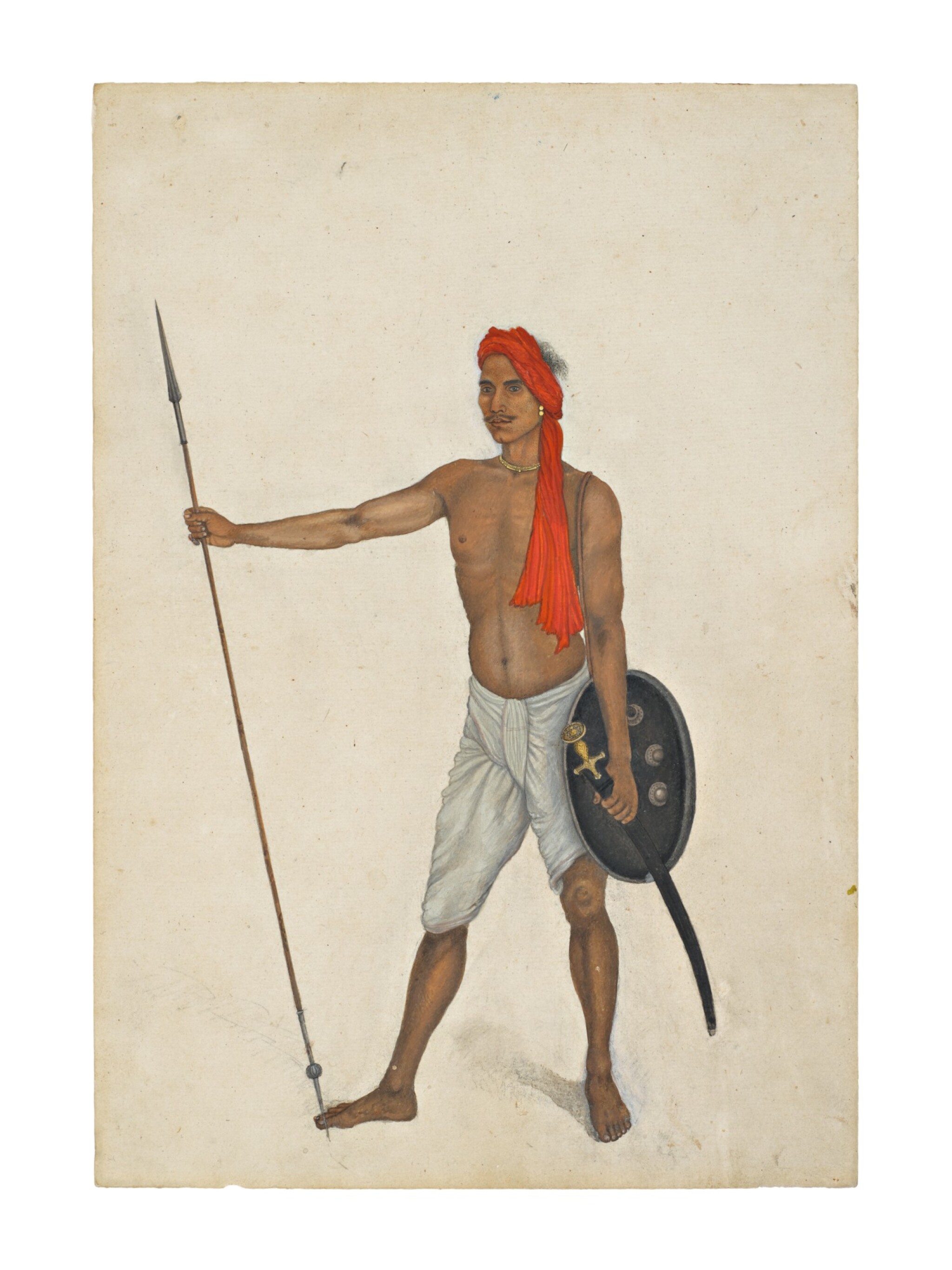 pencil and opaque watercolour heightened with gold on paper

This illustration is from a well-known series of watercolours commissioned by William Fraser (1784-1835) and his brother, James Baillie Fraser (1783-1856) between the years 1815-19 depicting local life in Delhi and its surrounding areas. The Fraser brothers travelled in the Himalayas during the Nepal War of 1814-15, when William was a Political Agent. After their return from the hills, William introduced James to several of his friends including Colonel James Skinner (1778-1841). James formed a long-lasting friendship with Skinner, the Anglo-Indian Colonel of the famous Irregular Cavalry Corps, Skinner’s Horse. William was even offered the rank of Major in Skinner’s Horse, which he accepted after receiving permission in 1817 from Sir Charles Metcalfe, then Resident of Delhi (Falk and Archer 1989, p.38).

Some of the finest portrait studies in the Fraser Album were done from life when young men from villages near Delhi came to enlist in what became known as the Second Regiment of Skinner’s Horse (Losty and Roy 2012, p.221). James Skinner was the son of a Scottish soldier father and a Rajput mother and was initially denied service with the East India Company due to his mixed parentage. Skinner became a mercenary and joined the Maratha forces during their control of Delhi in the late eighteenth century. When Delhi fell to the East India Company in 1803, the Company recruited Skinner’s services. He, in turn, recruited young men from Mewatti, Maratha and Rohilla villages near Delhi and founded the first regiment of Irregular Cavalry known as Skinner’s Horse at his estate at Hansi in Haryana. A second regiment was founded in 1814 at the time of the Anglo-Nepal War. It is the recruits for this new regiment who are depicted in the Fraser Album. Skinner had the recruits’ uniforms specially designed – a black jacket with red frogging, a red and saffron cummerbund, with a tall shako hat. The soldiers came to be known as the 'Yellow Boys' because of their yellow surcoats. Skinner’s Horse was the first Irregular Cavalry regiment in the army of the East India Company and was soon regarded as the best light cavalry force in North India.

The present illustration is thought to have been painted by an artist from the circle of Ghulam 'Ali Khan, who was employed by the Fraser brothers alongside other local Delhi artists to work on the Fraser pictures (Dalrymple 2019, p.162). James Skinner had enlisted the help of Ghulam 'Ali Khan to work on a compilation of drawings between 1820 and 1830 which form the Skinner Album, now in the British Library (Add.Or.1243-83). Skinner probably met Ghulam 'Ali because of this friendship with the Fraser brothers. Several recruits from the regiment also appear in the Skinner Album. Some of the compositions in the Skinner Album are versions of paintings in the Fraser Album, in other instances the same figures are depicted in different compositions. The Skinner Album includes individual and group portraits of troopers and orderlies from the regiment, as well as noblemen and other residents from the neighbourhood known to Skinner. The recruits also make an appearance in three large watercolours which Skinner commissioned Ghulam 'Ali Khan to paint for him in 1827-28. Depicting Skinner holding a regimental durbar, a view of the cantonment at Hansi with his regiment in ceremonial display, and everyday life at Skinner’s farm, the works are now in the National Army Museum in London (illus. Dalrymple and Sharma 2012, no.58-60).

For other single-figure illustrations of troopers from Skinner’s Horse carrying a spear and dressed in a similar manner, see Archer and Falk 1989, pp.122-3, plates 115 & 116 (the illustration in plate 115 sold at Sotheby’s, New York, Important Indian Miniatures from the Paul F. Walter Collection, 14 November 2002, lot 52.) Another comparable portrait is of Kala, a favoured soldier from Skinner’s Horse, who is depicted wearing a dhoti, standing in a heroic pose with a drawn sword after killing a tiger (The David Collection, inv. no. 58/2007; illustrated in Crill and Jariwala 2010, pp.156-7, cat.no.54). For a portrait of Kala in Skinner’s Uniform, see pp.158-9, cat.no.55. Another cavalryman dressed in complete uniform is illustrated in Archer and Falk, ibid., plate 112.

For further discussion on the Fraser Album and for another illustration from the Album depicting a Hindu physician from Delhi seated with his companions, see lot 8 in the present sale.