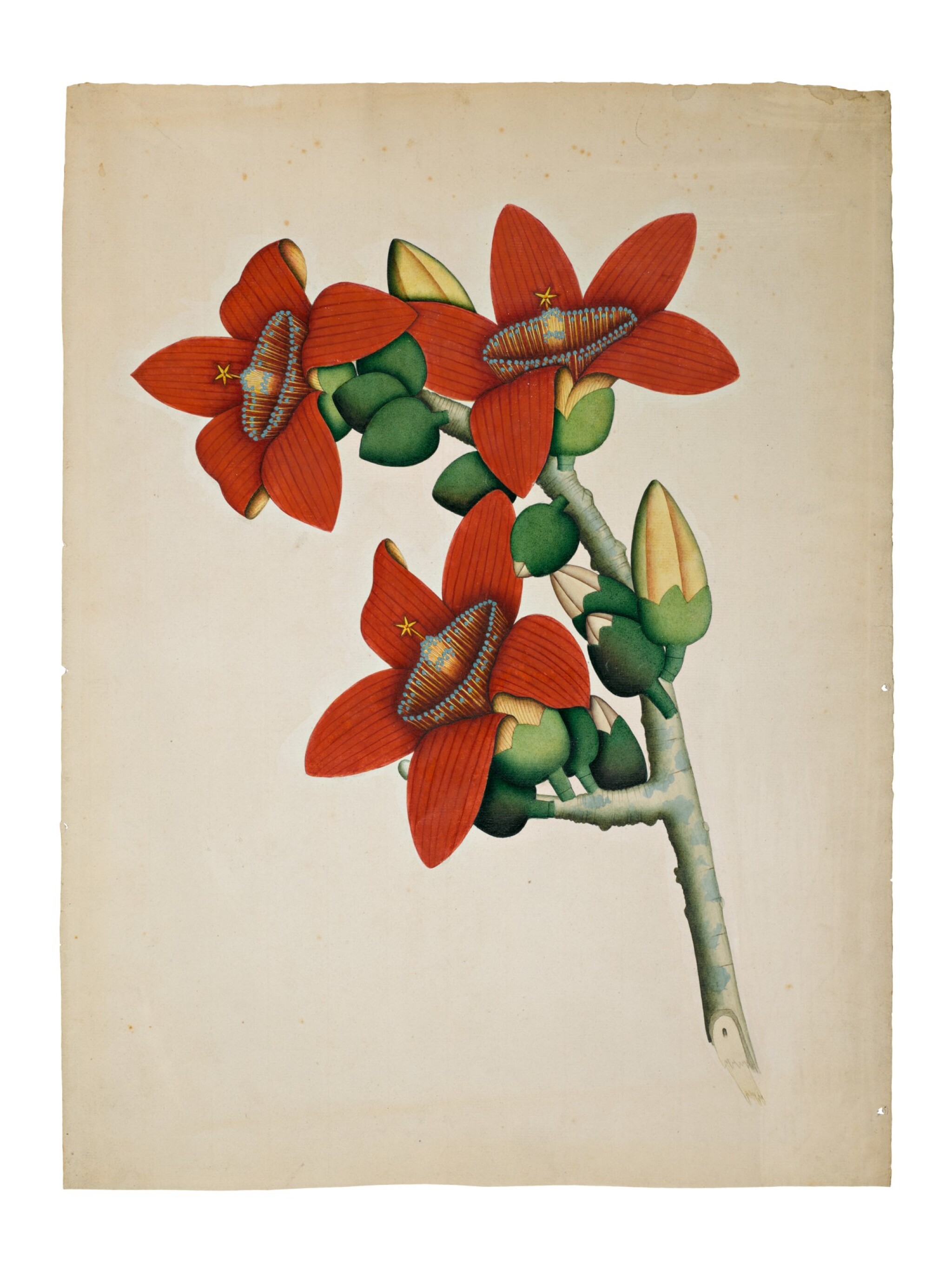 William Dalrymple, ed., Forgotten Masters: Indian Painting for the East India Company, The Wallace Collection, exhibition catalogue, London, 2019, no.55
Forgotten Masters: Indian Painting for the East India Company, The Wallace Collection, London, 3 December 2019 - 13 September 2020
This striking, colourful painting features a branch from the Bombax Ceiba, a large Indo-Malayan tree known as the Cotton Tree due to the cotton-like substance which grows within its small brown fruits. In India, it is known as 'Seemal' and even features in the Hindu epic the Mahabharata, as legend has it that Brahma rested under one of these trees after creating the world. The ripeness of the richly coloured red petals of the present painting suggest that it is depicted in full bloom, which usually occurs between February and April. The cotton fronds would also often fall to the ground upon the splitting of its fruit and create a thin layer ready to be collected by gaddawalas, or mattress-fillers. This plant also holds many medicinal properties, from abdominal to pulmonary issues, since its roots act as tonics, rendering it a very useful commodity.

A small number of paintings of the same subject are known, notably one in The Metropolitan Museum of Art (inv.no.2016.489), formerly part of the collection of horticultural books, prints and drawings belonging to Edward Smith Stanley, 13th Earl of Derby (1775-1851), kept at Knowsley Hall, Merseyside, England. Although holding a political career, Stanley was a keen naturalist and presided over the Zoological Society of London and was the founder of the Knowsley Museum, part of whose collections entered what is now the World Museum, Liverpool.

The existence of more than one version of a plant such as the present example was not an uncommon occurrence. We know that in some cases multiple versions were made, with the intent of sending duplicates to England, others to recover lost examples and in some cases, it was the collectors themselves who commissioned copies of paintings that they particularly liked or were interested in. The numerous drawings in collections in England and Scotland, including the Royal Botanical Gardens at Kew, the Royal Botanic Garden, Edinburgh, the Natural History Museum, the British Library and the British Museum, London, total over nine thousand examples, some of which are copies that formed part of different collectors’ sets (Noltie 2019, pp.78-85).

One must also note the artistic debt to the Mughal and Deccani schools and the popularity of flower studies at court in the early-seventeenth-century. Jahangir's well-documented interest in flowers gave an added impetus to a group of artists and patrons already interested both in natural history and naturalism in painting. This royal interest in floral studies coincided with the arrival in India of European images of flowers in the form of engravings, florilegia and perhaps official documents with floral borders. A beautiful folio from the album of Dara Shikoh, Jahangir's grandson, attributed to Muhammad Khan, 1630-33, now in the British Library (inv.no.3129 f.67v), shows off all of these floral studies. A unique style was developed, and it has been suggested that many of the artists seeking new patronage at the end of the Mughal empire started to work for East India Company representatives.