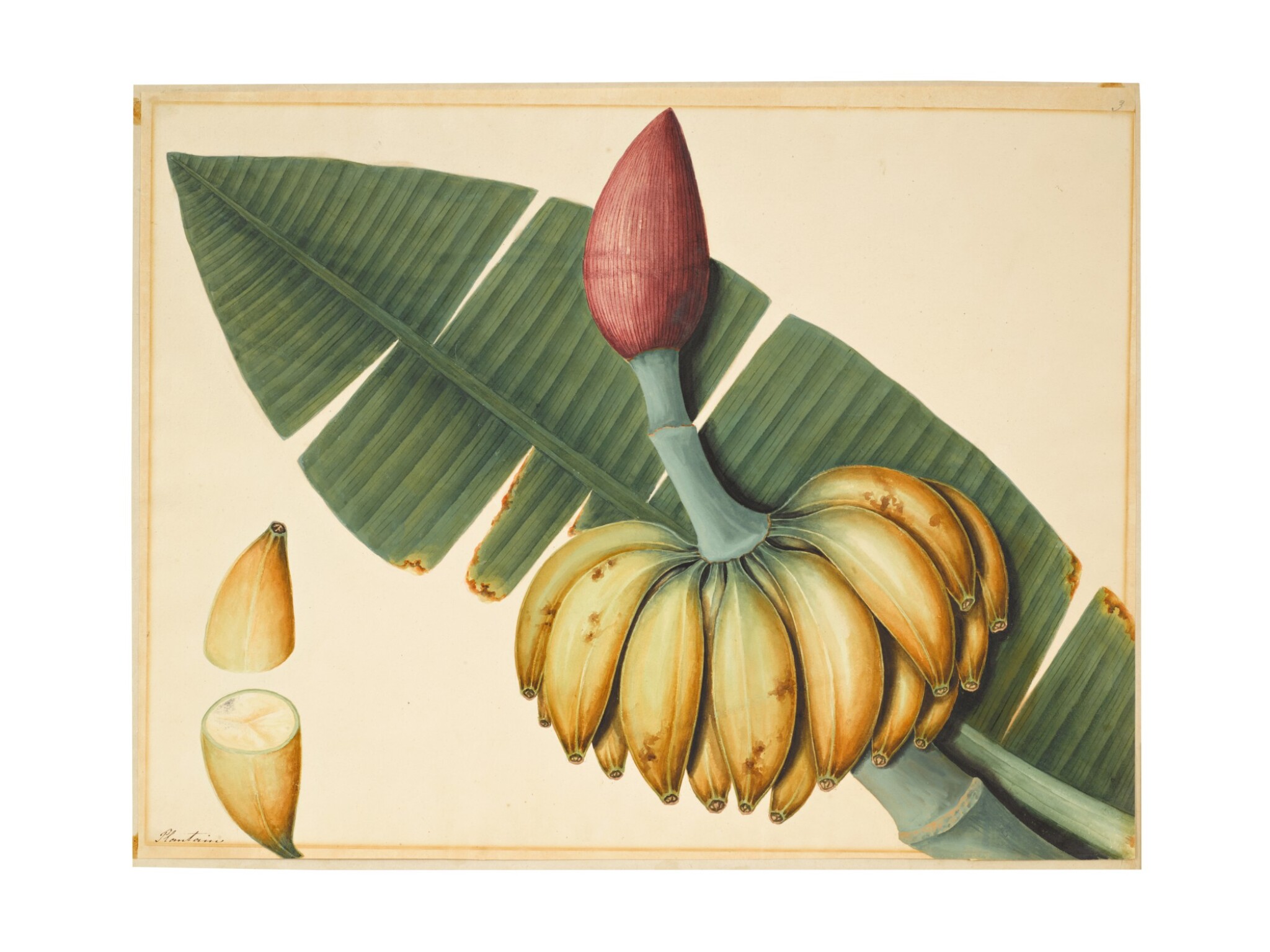 As Mildred Archer noted, it can sometimes be difficult to distinguish between the so-called 'Straits school' and the Indian export school of painting, as watercolours by artists working in both categories sometimes ended up in the same album. In the present case, an attribution towards a Chinese artist is based on stylistic grounds as well as the inclusion of blemishes on the leaves of the plantains and mangoes, a characteristic noted by Gill Saunders: "[...] as a subtle, confident use of watercolour... showing the underside of leaves by using a paler shade of solid green... the inclusion of blemishes, the marks of disease, age or insect damage, on the leaves or fruit" (quoted in Noltie 2009, p.163). The mango shows similarities with a painting in the William Farquhar collection (see Bastin and Guan 2015, p.109). However, one cannot negate an Indian origin for these paintings as signs of perish can also be found on Indian Company School examples. The mango, which has been cultivated in India for over two-thousand years is one of the country's favourite fruits, although this one is described as a "Manilla Mango". For an article on the depiction of the mango in Indian miniature paintings, including in two paintings in a private collection from an album of botanical studies by the artist Sita Ram, Calcutta, 1814, see https://www.architecturaldigest.in/story/mangoes-as-seen-in-indian-miniature-paintings/

Another variation of the mango tree is depicted by an unknown Dutch artist in India for Hendrik Adriaan van Rheede tot Drakestein (1636-91), governor of the Dutch East India Company (VOC), and published in the Hortus Indicus Malabaricus, one of the first European corpuses on Indian plants, produced between 1678 and 1693. The story of its publication and all of the local and Dutch scholars and painters who worked on it is discussed in the forthcoming publication by Martyn Rix, Indian Botanical Art: an illustrated history, Royal Botanic Gardens, Kew, Kew Publishing, Roli Books, 2021, pp.40-43. This fascinating study focuses on the gardens' debt to the Subcontinent and its artists who depicted various species. The Royal Botanic Gardens at Kew, originally founded as a private Royal garden in the mid-eighteenth century, today boasts nearly one million herbarium species from the Indian subcontinent.