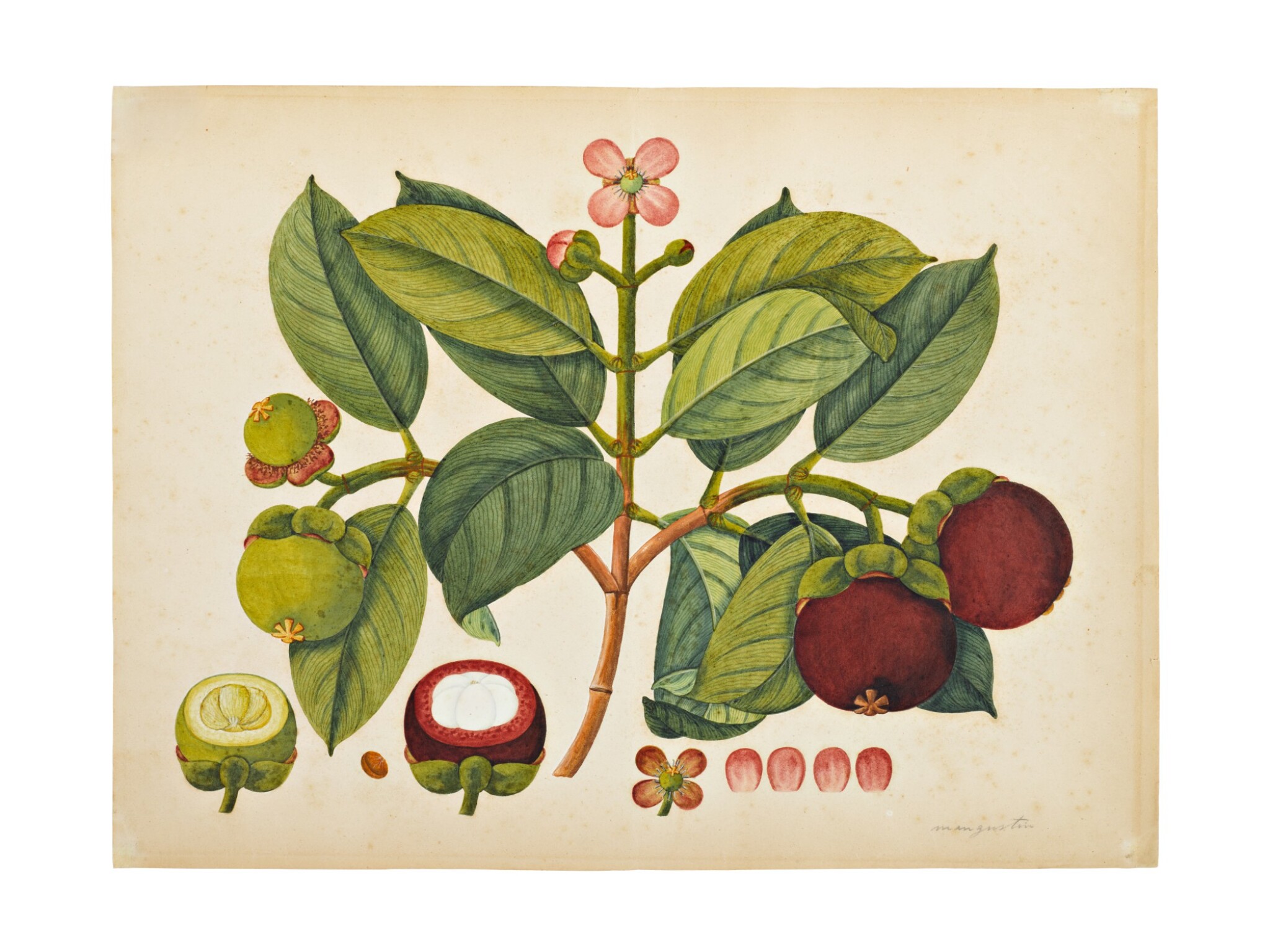 pencil and watercolour on paper, depicting mangosteen, pisang and durian, the first inscribed in pencil at lower right ''mangustin'', the second at lower left ''Pesang woodung''

Odyssey Fine Arts Ltd., London
The Hon. and Mrs. Joseph Verner Reed, Jr., Connecticut
Joseph Verner Reed Jr. was an American diplomat who served as the United States Ambassador to Morocco from 1981 to 1985

The durian, with its spiny outer shell and moist, pungent flesh, is often referred to as the 'king of fruit'. Weighing up to seven pounds, these large fruits grow on trees and have a short period of ripeness. Apart from the danger of one of these foot-ball sized fruits falling on your head, their cultivation is difficult, possibly adding to their continued allure. They were described by the seventeenth century missionary Jacques de Bourges as "The flesh is as white as snow, exceeds in delicacy of taste of all our best European fruits, and none of ours can approach it."

They are also beautiful to paint, so it is no surprise that the Royal Botanic Gardens at Kew contain seven versions of the durian made in South East Asia between circa 1770 and 1850, probably by Chinese artists (Noltie 2009, pp.13-14, fig.4 and pp.114-5).

The mangosteen, also forming part of this group, is considered the 'queen of fruit'. In contrast to the durian, it is juicy and tastes slightly acidic; it has even been used in traditional medicine. It is also much smaller, red when ripe and depicted here on a tree branch with its flowers at several stages of its maturity. Like the durian, these are particularly known to grow in South-East Asia, particularly in Indonesia (see Bastin and Guan 2015, p.117 for another version of a mangosteen painting).

Also included in this group is the pisang, or Malaysian banana, in this case with a dark pink skin, of slightly smaller size than normal bananas. They are shown growing on its palm tree, with a detail of a bunch and as a single open example.

See lot 28 for a further discussion on the works by Chinese artists for British patrons.