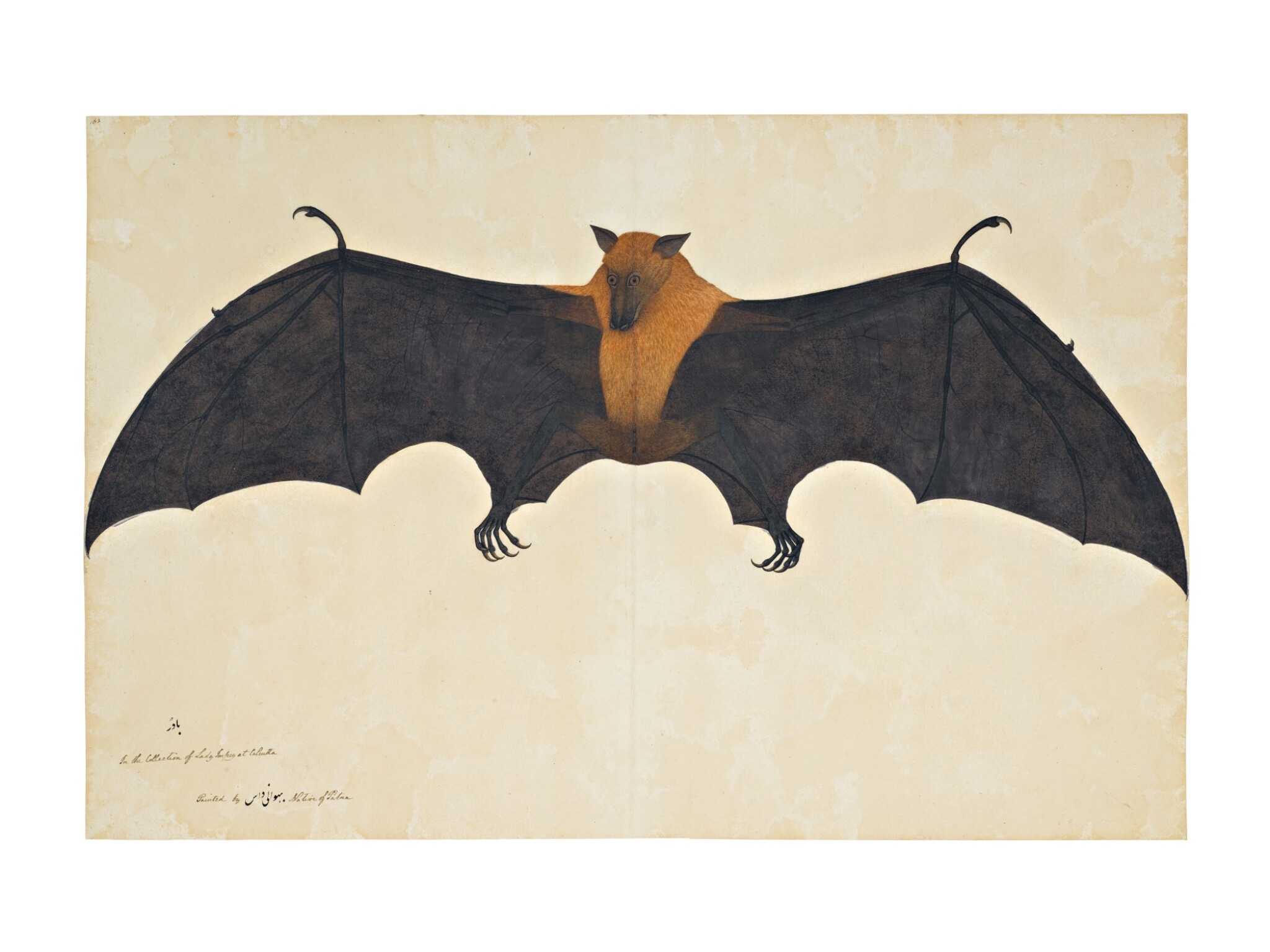 This dramatic depiction of a female Fruit Bat, with both its wings outstretched, is by the artist Bhawani Das, originally from Patna, who worked in the Impey atelier in Calcutta in the late eighteenth century. The English inscription in the lower left corner includes the name of the artist in nasta’liq script along with an identification of the bat in Urdu. Bhawani Das has achieved a skillful contrast between the furry body of the bat and its outstretched wings executed with angular precision. The bat has been painted in subtle shades of brown and black, the composition in stark contrast to the plain white background. The body is meticulously detailed with the fur, the veins in its wings and the claws clearly visible. Struck by it's eeriness, Stuart Cary Welch observed in 1978, that it "…looks far too disturbing to be a strict fruitarian" (Welch 1978, p.40).

Bhawani Das is perhaps most well-known for his studies of fruit bats. Besides the present lot, there is another example of a male Fruit Bat, also formerly in the Niall Hobhouse collection, now in The Metropolitan Museum of Art, New York, painted with its right wing outstretched and the left folded (acc.no.2008.312; Ekhtiar et al., 2011, no.285, pp.342, 400-1, ill. p.400). The Fruit Bat in the Metropolitan Museum of Art lacks an inscription but was almost certainly painted by Bhawani Das, or a close follower, around the same time as the present lot. A third study of a female Fruit Bat hanging upside-down, with its claws hooked around a slender branch, is in a private collection (see Dalrymple 2019, cat.no.34, p.71). It bears an inscription in the lower left corner which includes the name of Bhawani Das and is dated 1780. The frontal view of our bat is also comparable to 'A Dwarf Flying Squirrel hanging from a Kuru Creeper' painted in 1780 by Shaykh Zayn al-Din, the principal Impey artist. Formerly in the collection of Edwin Binney 3rd, the painting is now in the San Diego Museum of Art (acc.no.1990.1358).

The present painting was commissioned by Mary Reade, Lady Impey (1749-1818), wife of Sir Elijah Impey, Chief Justice of Bengal (1774-82). Sir Elijah and Lady Impey arrived in Calcutta in 1774. Lady Impey developed a keen interest in the local flora and fauna and established a private menagerie and aviary at the Impey estate on Middleton Row in Calcutta. Three Indian artists from Patna were employed to paint the birds, animals and various plants. The senior among them was a Muslim artist called Shaykh Zayn al-Din. Bhawani Das and Ram Das, two Hindu artists, joined Zayn al-Din two or three years later. The artists were trained in the Mughal style of Indian painting and were able to adapt their skills at precision and naturalism to the European tradition of natural history illustrations. This group of paintings commissioned by Sir Elijah and Lady Impey between 1777 and 1783, now known as the 'Impey Album' is considered the finest set of natural history illustrations made for the British in India.

Henry Noltie mentions the recent discovery of a drawing in an album for Dr James Kerr of Crummock (1737-82), a Scottish surgeon in Bengal in 1772, of a spray of green mangoes painted by Bhawani Das (Dalrymple 2019, p.79 and cat.no.41, p.86). Another version of this drawing from the Impey Album, signed by Bhawani Das, is in the Victoria and Albert Museum. This implies that Bhawani Das was employed by Dr James Kerr before he came to work for the Impeys.

Birds and animals, the main subjects of the Impey series, were illustrated on large sheets of English Whatman paper. Inscriptions in English and Persian were added to almost all the paintings, some including the name of the artist and a date. The stylised, miniature landscapes seen in bird illustrations from Lucknow were not used by the Impey artists. Bird subjects were sometimes illustrated perched on a branch of a flowering or fruiting tree. Landscapes were included in very few examples, such as the Satyr Tragopan on a rocky ground by Shaykh Zayn al-Din in 1777 (sold at Sotheby’s, London, The Khosrovani-Diba Collection, 19 October 2016, lot 21), and a Malabar Giant Squirrel gripping an almond tree painted by him in 1778 (see lot 13 in the present sale).

A group of 326 watercolours were brought back to England by the Impeys in 1783 of which 197 were studies of birds, 76 of fish, 28 of reptiles, 17 of animals and 8 of flowers. After the death of Sir Elijah Impey in 1809, the collection was dispersed at a sale at Phillips in London on 21 May 1810. Sixty-four watercolours from the Impey series, including the present lot, were bequeathed by Mrs Sarah Impey to the Linnean Society of London in 1855. The Linnean Society, located at Burlington House in London, is the world’s oldest active society dedicated to natural history. The Society takes its name from the Swedish naturalist Carl Linnaeus (1707-78), who developed a classification system of dividing living organisms into specialised groups depending on their characteristics.

For three other illustrations from the Impey series in the present sale, see lots 13, 15 and 16.