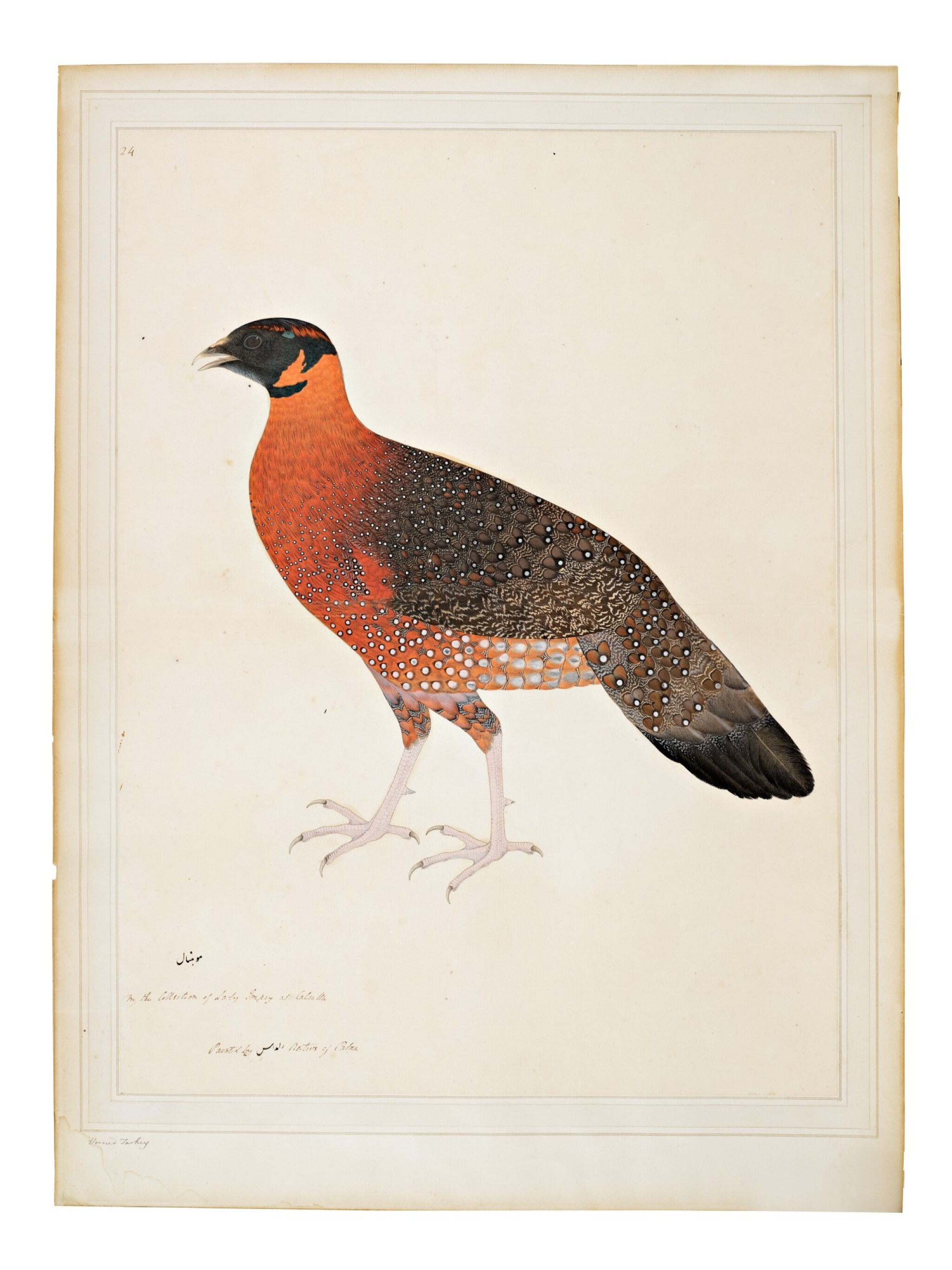 pen and ink, watercolour with gum arabic, heightened with bodycolour, on 'J. Whatman' watermarked paper, numbered ''24'' at upper left, inscribed at lower left ''In the Collection of Lady Impey at Calcutta/ Painted by (in nasta'liq script, Ram Das) Native of Patna'', further Urdu identification inscription in nasta'liq script at lower left ''muhnal'', later identified in pencil as ''Horned Turkey'' in the lower left margin of the mount

Sir Elijah Impey (1732-1809) and Lady Impey (1749-1818)
His estate sale, Phillips, New Bond Street, London, 21 May 1810
The Property of the Linnean Society of London, bequeathed by Mrs Sarah Impey in 1855
Sotheby's, London, 10 June 1963, lot 30
Anthony Hobson, London (1921-2014)
Christie's, London, 10 June 2015, lot 61
The Satyr Tragopan, or Crimson Horned Pheasant (Tragopan Satyra), is a resident of the Himalayas and can grow to about 72 cms. A male Satyr Tragopan, as depicted here, has a red underside with black-bordered white spots. Its intricately patterned upper feathers range from olive green to brown. Blue skin is visible around its face and throat. During mating season, the male grows blue horns.

The present illustration is signed by Ram Das, who was employed by Lady Impey to paint the various birds, animals and plants on the Impey estate. Ram Das was originally from Patna and trained in the traditional Mughal school of miniature painting alongside Shaykh Zayn al-Din and Bhawani Das, the other two artists working for the Impeys at the same time. He started as an assistant artist probably two or three years after Zayn al-Din began working on the Impey series. The superlative quality of this illustration suggests that this was not one of his early works as an apprentice. It was considered worthy enough for the artist to add his name to the work and for it to be included in the series alongside works by Zayn al-Din, Lady Impey’s main artist.

Ram Das would have been aware of an earlier comparable illustration of the same bird on a rocky ground, painted by Zayn al-Din for the Impeys in 1777 (sold in these rooms as part of The Khosrovani Diba Collection, 19 October 2016, lot 21). Another very similar illustration of a male Satyr Tragopan, lacking an inscription but attributed to Zayn al-Din, sold in these rooms, 12 October 2005, lot 41. A further illustration, with a partial identification inscription in Urdu 'muhnal', sold at Christie’s, London, 24 October 2019, lot 150.

For further discussion on the Impey series and for other illustrations from the series in the present sale, see lots 13, 14 and 15.