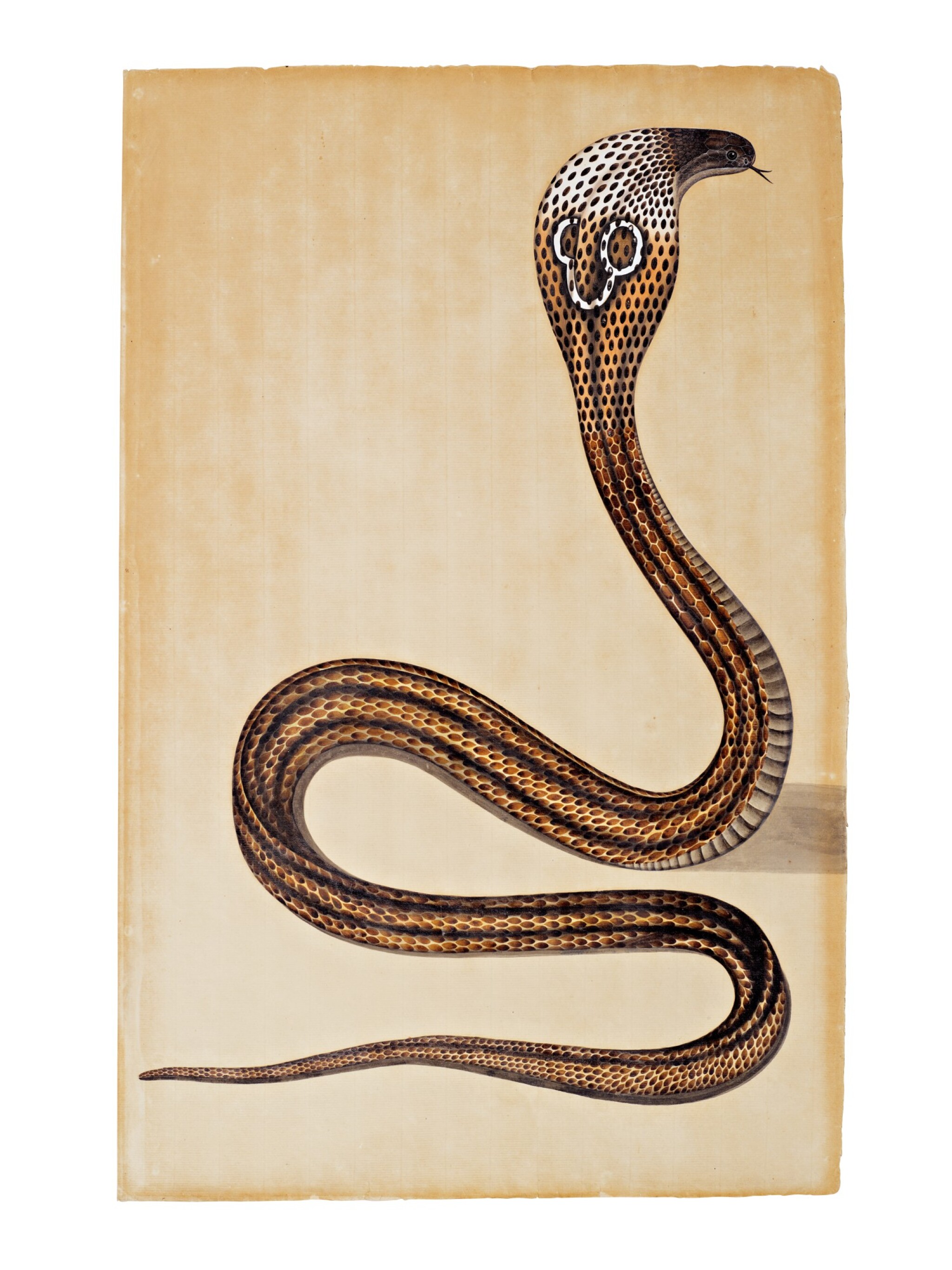 watercolour and bodycolour on paper, inscribed on the reverse ''JNR 5'' and ''36''

Major James Nathaniel Rind (d.1813), thence by descent
Mrs. S. Richardson and Mrs. S. M. Norman
Sotheby's, London, 13 July 1971, lot 36
Niall Hobhouse, London
Francesca Galloway, London
The Cobra De Capello is one of the most dangerous and highly venomous snakes found in India. It is sometimes known as the 'hooded snake' as its neck rises to form a hood over its head, as illustrated in the present lot. The spreading hood displays the serpent’s distinctive black and white markings like a pair of spectacles. It is depicted here with its forked tongue extended and its body marked with brown scales on a yellow ground.

References to snake (naga) deities are found in Hindu mythology and folklore. Snakes symbolise re-birth and eternity because of their ability to slough their skins. They are associated with two main Hindu deities, Shiva and Vishnu, and worshipped for their divine connections. Prayers are offered to snakes on the fifth day of Shravan, the fifth month in the Hindu calendar usually between July and August, a month dedicated to Shiva.

This illustration was formerly in the collection of Major James Nathaniel Rind (d.1813), an officer in the army of the East India Company. He was in India from 1778 to 1804, and whilst serving in the 18th (and later 14th) Native Infantry he was engaged in surveys of Company territory between 1785 and 1789. Although initially for administrative purposes, these surveys became a means of gathering scientific knowledge about plants, birds and animals in the region. Rind became a Brigade Major in Calcutta in 1801 and assembled a large collection of natural history drawings while posted in Calcutta between 1793 to 1801. Many of the drawings, like the present illustration, have his initials ‘JNR’ inscribed in pencil on the reverse. A large part of the Rind collection was sold at auction by his descendants at Sotheby’s, London, 13 July 1971, lots 1-48.

Three illustrations from his collection depicting the famous sheep eater from Farrukhabad dated to circa 1785-90; three botanical studies dated to circa 1800; and a Cobra de Capello, dated to circa 1800, are illustrated in Welch 1978, pp.44-49, nos.11-13. The Cobra lent to the 1978 exhibition by Edwin Binney 3rd is another version of the present illustration. A third version, signed by Chunni Lall and dated to circa 1790, also commissioned by Major Rind, sold in these rooms, 6 October 2015, lot 33, as part of the Sven Gahlin Collection. For a comparable illustration of a Cobra De Capello painted by Bhawani Das for Lady Impey in 1782, now in the Wellcome Collection, London, see Dalrymple 2019, p.66, cat.no.29.

Illustrations of two Common Grey Hornbills attributed to the artist Chunni Lall, a Tawny Eagle and a Hyena, painted in Calcutta, circa 1795, are illustrated in Hobhouse 1991, nos.8-10. The study of the Common Grey Hornbills is now in the British Museum in London (acc.no.1992,0106,0.1). Two botanical studies, one of a radish (acc.no.2007.289), the other of a male papaya tree (acc.no.2016.169), painted in Calcutta in the late eighteenth century, are in The Metropolitan Museum of Art in New York.