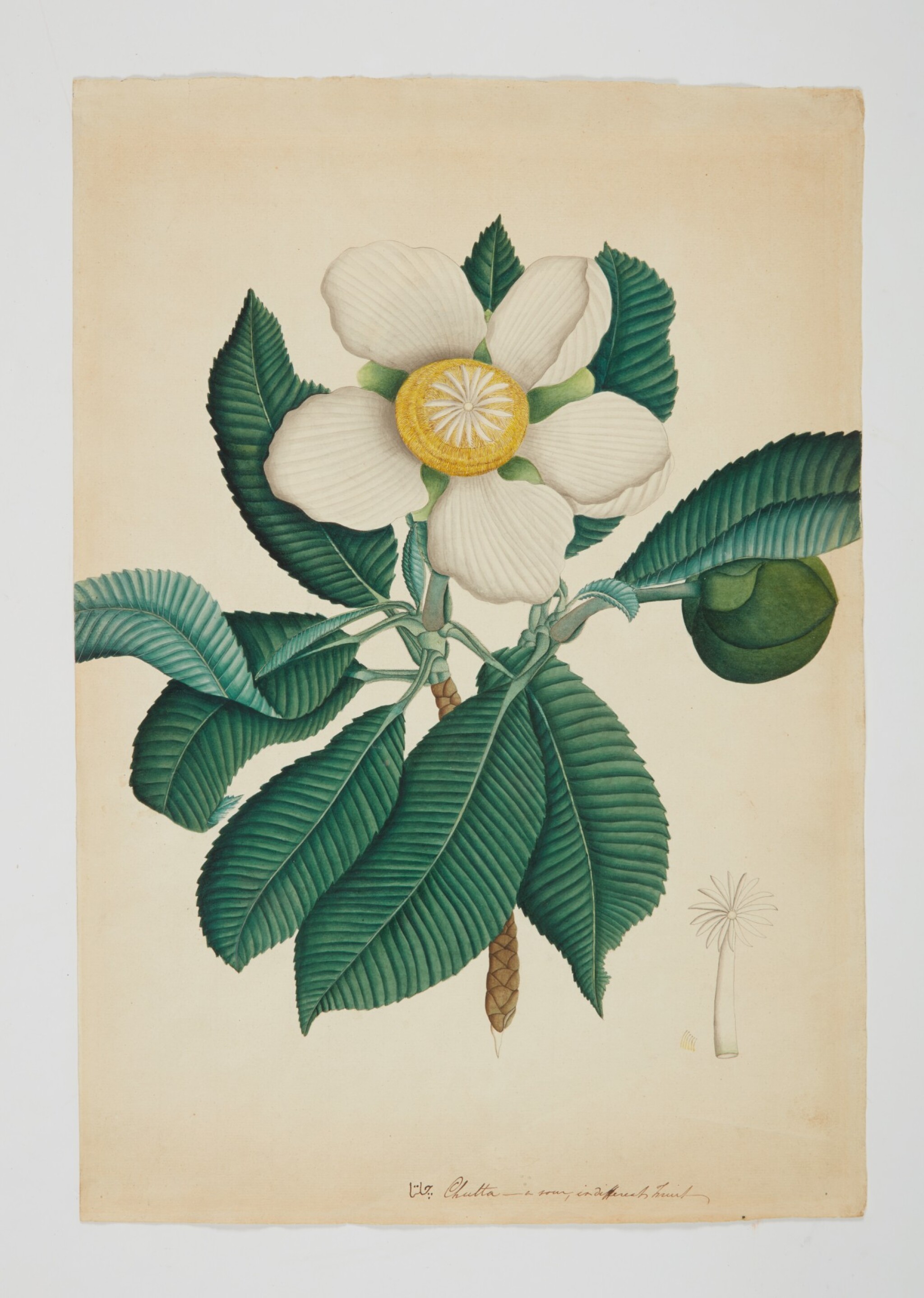 watercolour on paper, watermarked 'J WHATMAN' with a fleur-de-lis above a crowned cartouche, inscribed at lower centre with an Urdu identification in nasta'liq script ''chulta'', further inscribed ''Chulta: A Sour Indifferent Fruit''

Private collection, U.S.A.
The Chulta plant is portrayed here showing off its large flower, characterised by five white petals surrounding a yellow core with white stamen. Native to Southeast Asia and Western Malaysia, these trees are also recognisable by their distinct corrugated leaves. Also known as the 'elephant apple' they serve as delicacies for the local elephant population. The inscription in Urdu reads "Chata" and in English: "Chulta: A Sour Indifferent Fruit", in disagreement with the elephants’ taste.

Stylistically, it relates to the group of watercolours forming William Roxburgh’s Flora Indica, part of which are now in Kew Gardens, notably to a similar plant described by him as follows:

"This when in flower is one of the most beautiful trees I have ever seen; it is a native of the vallies, far up amongst the Circar mountains; is also found cultivated in some gardens on account of its elegant appearance. It flowers during the hot season, and the beginning of the rains, and the seed ripens in February... Flowers looking down the earth finally, delightfully fragrant, very large, about nine inches in diameter... The fleshy leaflets of the calyx when the fruit is full grown have an agreeably acid taste, and are much used by the natives where the trees grow, in their curries. They make a tolerably pleasant jelly. The wood is both hard and tough; and used to make gun-stocks." (Roxburgh 1824, vol.2, p.650).

The Roxburgh paintings share a similar method of application, including a fine initial brush drawing on which an even tint of colour was applied, the artist building up layers of paint and leaving the details until the end. Gum Arabic was used to accentuate darker areas and give depth to certain colours. This was especially effective on the green, producing a rich effect, as seen here. The smaller pencil vignette showing off parts of the flower is another characteristic of the paintings produced for Roxburgh, further suggesting an attribution to the circle of painters who worked for him in the mid-1790s.

Among the multiple botanical gardens and menageries established by members of the East India Company, as well as the Company itself, the most famous was at Sibpur, on the banks of the Hooghly, near Calcutta. Established in 1789 by Colonel Robert Kyd, it later came under the care of Dr William Roxburgh, a trained surgeon and known botanist, from 1793. During his various tenures, Roxburgh continued his scholarship, not only personally employing local artists over various periods but also continuously writing and publishing plant descriptions. By the end of his life, some 2,600 plant species were described and almost as many drawings produced although unfortunately the names of the artists working for him were not recorded. The most complete sets remain in the Calcutta Botanic Gardens, with copies sent to England, now at the Royal Botanic Gardens, Kew (Noltie 2017, p.11). For his achievements, he is sometimes referred to as the 'Father of Indian Botany'.