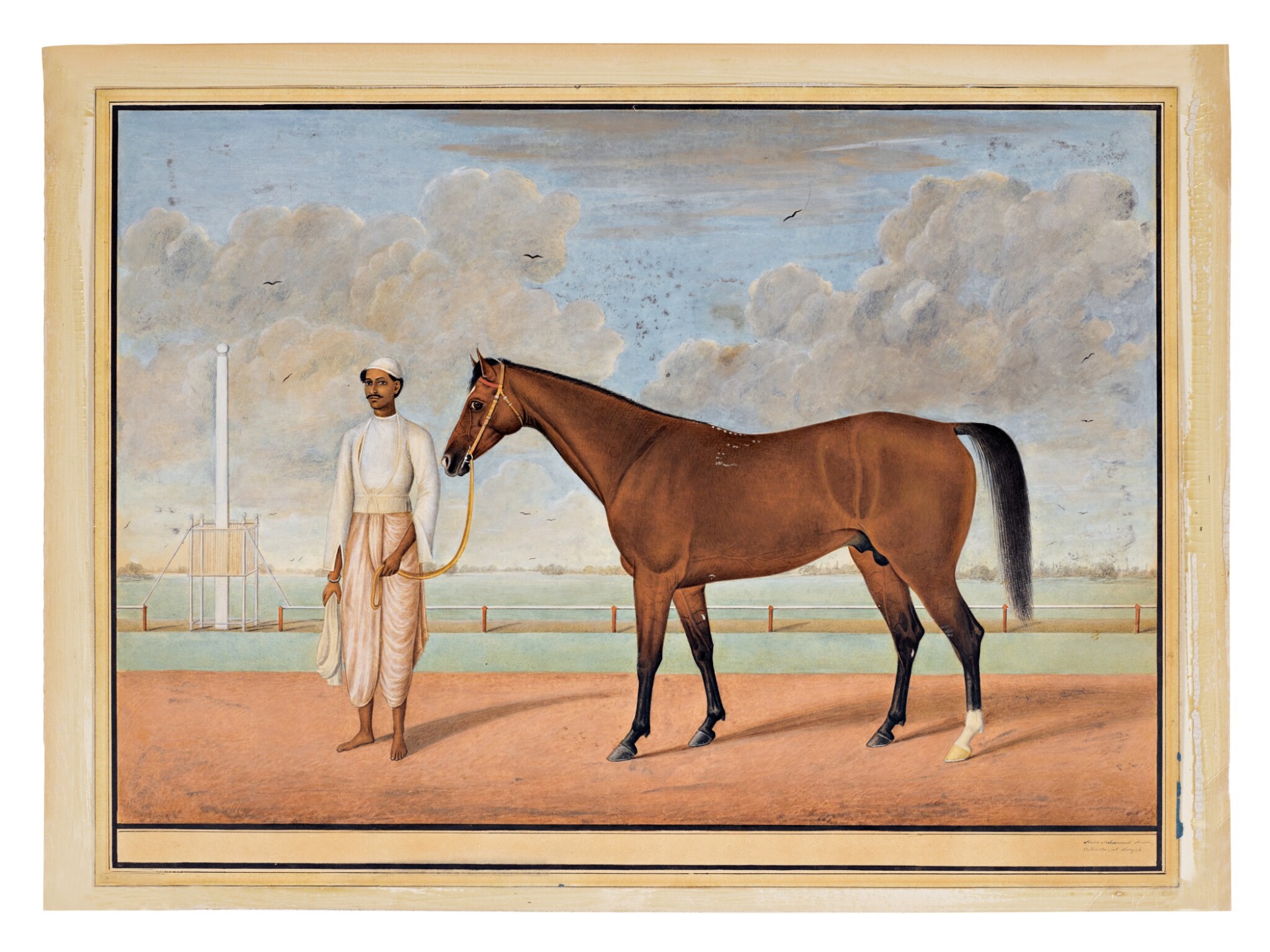 Our painting can be dated based on another almost identical version of this composition, formerly in the collection of the author V.S. Naipaul, signed by the artist in a similar manner and dated 1842 (illus. in Dalrymple 2019, cat.no.68). Muhammad Amir is known to have made at least three paintings of this bay stallion, depicted with its distinctive single white sock and its reins held by the same groom. The stallion is shown blinkered in the third version (ibid., p.128).

Most of Muhammad Amir’s paintings from the 1830s depict well-known views of Calcutta as well as the houses, carriages and palanquins, household servants, horses and dogs of British residents, reflecting the life and times of the capital of British India. Paintings of racehorses were very popular, a subject he returned to throughout his career. The horse and groom would often be depicted outside the stables or at the starting post, as illustrated in the present painting. The background would be views of the Calcutta Maidan or the banks of the River Hooghly with large clouds in the sky.

One of his earliest known works is a large panoramic view of Government House and Esplanade Row in Calcutta as seen from the Maidan, dated to between 1827 and 1830 (British Library, Add.Or.4151). He also produced an album of paintings in the mid-1830s for the Calcutta businessman Thomas Holroyd (1799-1893) of No.5 Park Street, Chowringhee. The album was donated to the Oriental Club in London in 1839 and subsequently sold in 1961. A painting of Thomas Holroyd reading in his palanquin by Muhammad Amir, previously in the collection of Edwin Binney 3rd, is now in the San Diego Museum of Art (1990.1787; illus. in Harris 2019, p.124). Another version of this painting, formerly in the Stuart Cary Welch Collection, sold in these rooms, 31 May 2011, lot 129. His most accomplished works are thought to have been painted in the 1840s. These large-scale album albums depicting life in Calcutta’s grand estates are now dispersed between the British Library, the Victoria and Albert Museum and various private collections. For further discussion on these works, see ibid., pp.124-5.

The figures in Muhammad Amir’s paintings were drawn from the staff of Calcutta households or depicted the locals of Karraya. Sets of paintings depicting trades and occupations were produced in large amounts by his studio. The English traveller Fanny Parks acquired one such set in Calcutta in 1844, from which she used four illustrations in her memoir Wanderings of a Pilgrim in Search of the Picturesque in 1850.