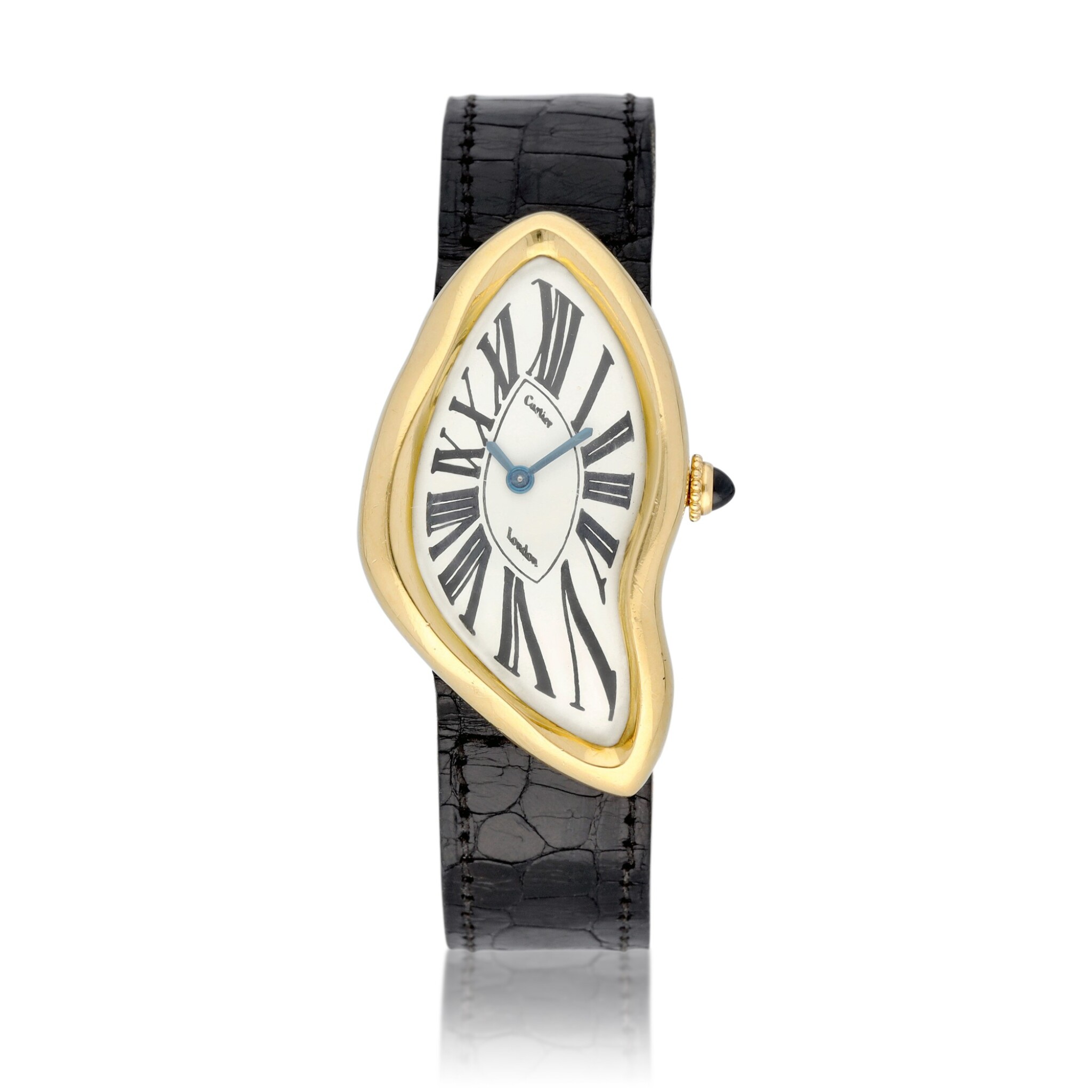 Made by Cartier London in 1970

DIAL: in overall good condition with some signs of wear.

An example of another first series Crash is illustrated in The Cartier Collection – Timepieces, by Franco cologne p.455

Under the creative control of Jacques Cartier, London became the most subversive and mold breaking of the three Cartier locations (London, Paris & New York). Fielding larger case sizes and designs which ran against the grain of the norm of watchmaking culture for the era, pieces like the present Crash embody and echo London in the swinging sixties.

Its origins are rumored to have been the remnants of a Baignoire wristwatch brought into the workshop for repair, melted and crumpled in a fiery car crash, the Dali-esq form defies states of matter and is akin to mercury. Regardless of its conception, it was produced in London in very small numbers, the first series cases were produced by Wright & Davies for Cartier from 1967 and later series, which have sharper forms and edges from the 1980’s to 1990’s by Arthur Withers, also in London.

The present watch is from this first series; the assay marks on the left case band and interior of the case are London 1970 punches, with matching marks on the “melted” deployant clasp. Both also feature the makers mark “JC” for Jacques Cartier and matching case numbers, implying the clasp and watch were made for each other in a small batch. Additionally, it features the first series “London” dial for the crash with softer edges to the script and more vertically pointing stem on the letter “L”. It also features the Roman numeral IV as opposed to the latterly used IIII, found on some reissue models.

It is unknown exactly how many first edition crash pieces there are. However, it is speculated that less than a dozen were produced in the initial series, later models being special orders, short productions and a more commonly seen 1990’s reissue of 400 pieces featuring “Paris” signatures.

The lot is also accompanied by an insurance valuation from Cartier from 1999, noting the case numbers, hall marks on the piece, movement, dial type and hands.

The chance to own a 1st series Crash is an unspeakably rare opportunity and would sit in the top rung of any serious collection, with only two having being offered at auction in the last 25 years.