Property of the Weber Family 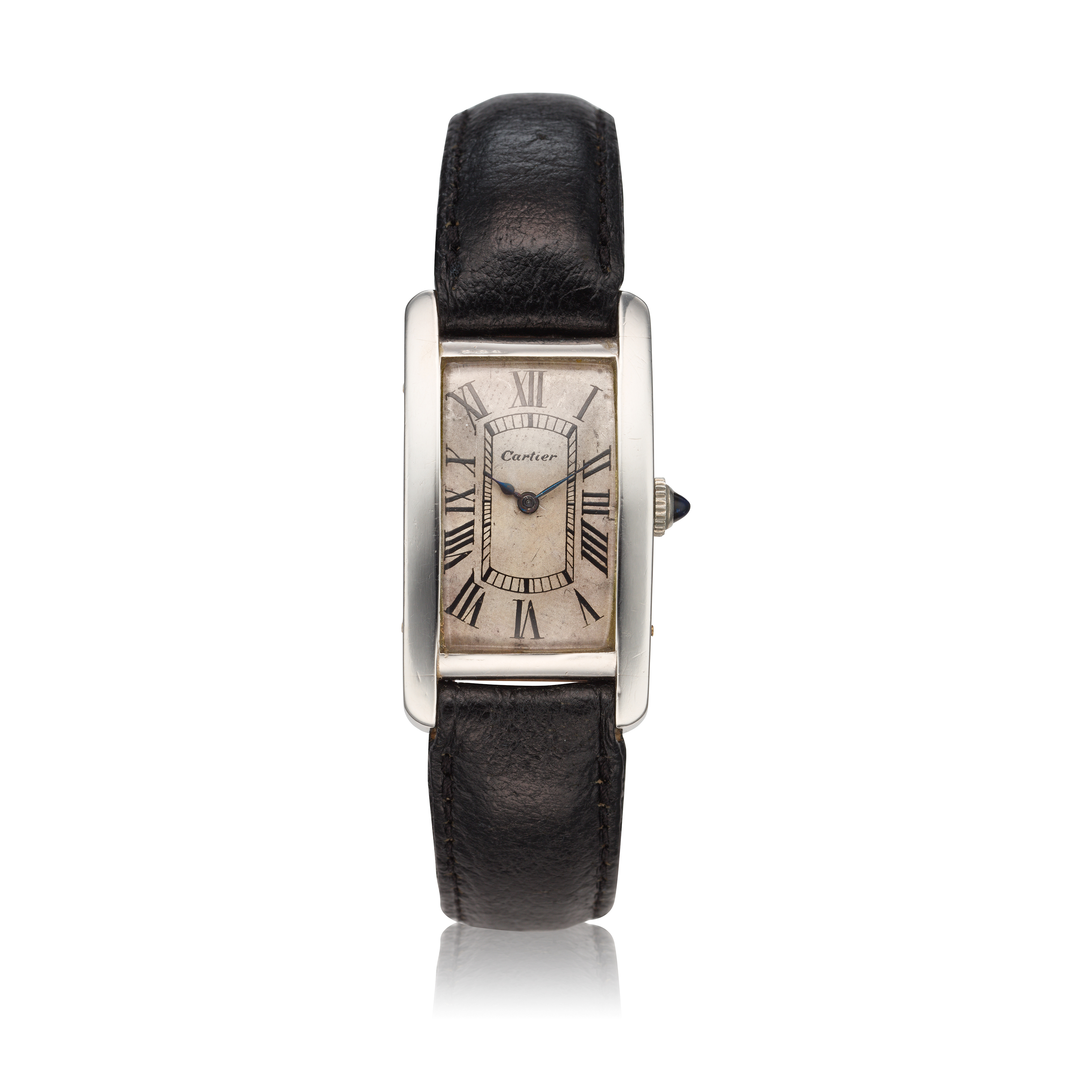 Property of the Weber Family

A rare platinum and yellow gold rectangular wristwatch, Circa 1925

Case: Case in good overall condition with previous polish in our view. Some small surface scratches and scuffs throughout. Screws to the case with some wear and scratches. Platinum mark to the case band is rubbed. Bezel between 11 and 2 with a visible horizontal indentation. Case back in yellow gold is personally inscribed " To William Webber commemorating our Atlantic crossing by Graf-Zeppelin 49 HRS- 42 MS Aug. 8-10-1929." The Case back with three sets of Cartier stamped numbers. The numbers stamped to the center are rubbed and not legible.

Dial: Dial with surface discoloration and wear throughout. Surface marks and age. Some scratches near the center arbor. Blued steel hands with wear and patina.

Movement: Movement with some light surface scratches. The movement is running at time of cataloging, however it was not tested for the accuracy of time or duration of the power reserve and may need service at the buyer's discretion. Please note that Sotheby's does not guarantee the future working of the movement.

Having long exemplified the pinnacle of luxury and prestige by way of tasteful design and quintessential elegance, Cartier came to be known as the “Jeweller of Kings and the King of Jewellers.” As one would expect, Cartier’s earliest watchmaking efforts attracted a comparably compelling and prestigious clientele, in search of some of the most refined designs the period had to offer. It is for this reason that the few remaining examples of desirably configured Tank models are often accompanied by provenance perhaps best described as larger than life. With reverence for early Cartier wristwatches now more widespread than ever before, the offering of any significant example inspires excitement and interest, though it could be said that the offering of one with a story is truly an event to behold.

Produced at the height of what’s considered the house’s golden age, this outstanding example of Cartier’s Tank Cintrée dates back to 1929, when it was purchased for the New York talent manager and once owner of the Piccadilly Hotel, William Weber, in commemoration of an Atlantic crossing aboard the LZ 127 Graf Zeppelin airship, which came about by way of a golf wager. After sighting the Graf Zeppelin on its first 1928 Atlantic crossing during a game of golf, Weber proceeded by staking an airship voyage on the golf game played with his friend and once owner of New York’s Palace Hotel, Nathan Wexler.

With the odds working in Weber’s favour, Wexler was left to pay for the Zeppelin passage, which cost an estimated two thousand dollars per person in 1929. The duo departed on August 8th, 1929 from Lakehurst, New Jersey, and arrived in Friedrichschafen, Germany on August 10th, 1929, travelling over seven thousand kilometres in the most extravagant manner possible. Considering the rare luxury that was regular air travel via airplane in the 1920s, the momentousness of a voyage aboard something as revolutionary as a transatlantic airship cannot be understated. It is for this reason that commemorating the event with a Cartier Tank Cintrée in platinum seems only natural.

For figures like Wexler and Weber, it was natural, given that both lived lives emblematic of the tremendous prosperity, which defined post-war New York City throughout the Roaring Twenties for a privileged few. Apart from the aforementioned voyage itself, little is known of William Weber’s enigmatic life apart from his later work in the management of nightclub singers and comedians, working with the likes of Jackie Gleason and Don Rickles among others. However, it is known that neither Weber nor Wexler were without their ties to organized crime in New York. With Nathan Wexler being the brother of notorious bootlegger Irving Wexler, also known as “Waxey Gordon,” it is believed that Weber used this connection to establish relationships within the world of mob-owned nightclubs, to later act as a liaison between talent and management.

Similarly, the Tank Cintrée itself was and still is emblematic of the elegance and glamour which characterized William Weber’s life amongst New York’s high society in the 1920s.

Introduced in 1921, the Cintrée appealed to Art Deco sensibilities with its grand stature and impressively thin, curved case. Complimented by curved upper and lower minute track edges, referred to by collectors as “chemin-de-fer,” this new take on the Tank was singular in its daring approach to elegance, which is only intensified by its execution in platinum — a precious metal pioneered within jewelry by Cartier. The offering of an impossibly elegant and convention challenging timepiece originally purchased to mark an exclusive airship voyage certainly presents a rare and unique opportunity to own a piece of horological history, synonymous with one of the most wondrous periods of the 20th century.