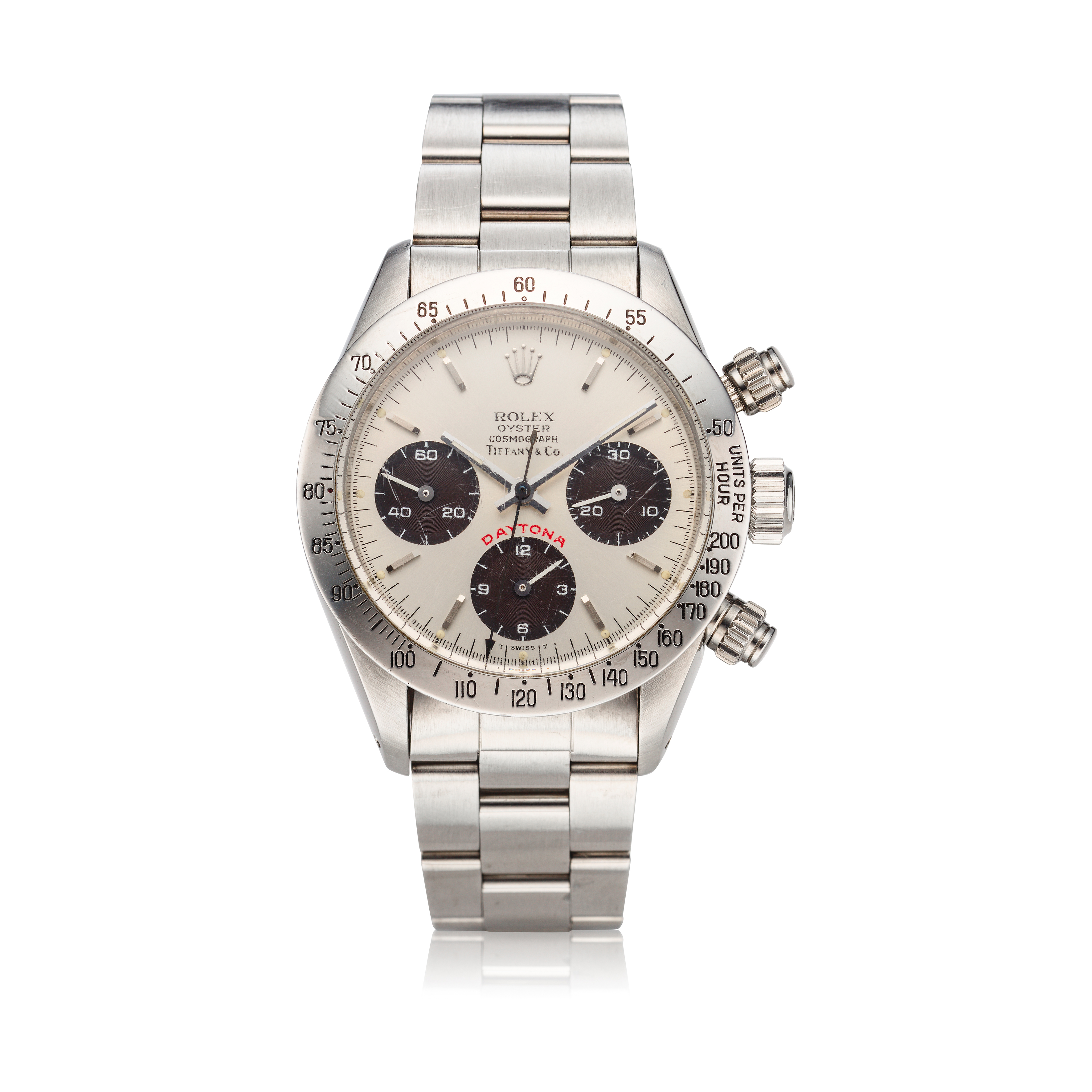 Retailed by Tiffany & Co.: A stainless steel chronograph wristwatch with bracelet, Circa 1979

Case: The case is in overall very good condition with signs of previous use and light polish. Case back personally inscribed 'To Dad Love Don'. The crystal glazing with surface scratches. The bracelet has visible surface scuffing commensurate with age.

Dial: The dial is in overall excellent condition. Luminous plots remain intact. Partial losses to the luminous plots at 3 and 9 o'clock. Service hands.

Movement: Chronograph operating. The movement is running at time of cataloguing, however it was not tested for the accuracy of time or duration of the power reserve and may need service at the buyer's discretion. Please note that Sotheby's does not guarantee the future working of the movement.

Tiffany & Co is without doubt the most historic and prestigious luxury retailer in the United States. Established in 1838 by Charles Lewis Tiffany and John Young with a $1,000 loan from Tiffany’s father, the first store was opened in 1838 on Broadway, before later moving to their flagship location on 5th Avenue and being renamed Tiffany and Co. Tiffany & Co’s relationship with watches goes back to their earliest days, and they have reserved their horological partnership to the world’s two most preeminent watch brands, Patek Philippe and Rolex. In the mid-1950s, Tiffany joined a select group of retailers worldwide given the privilege of printing their logo on the dial of Rolex’s most prestigious models. Throughout most of the time of their relationship, Rolex allowed the retailer to stamp their dials at their 5th Avenue premises and completed by Tiffany watchmakers, not at the Rolex factory in Switzerland. The exact number of Tiffany dialed Rolex’s from this era is unknown, but they are undoubtedly extremely rare, and represent some of the most sought after, desirable and iconic watches to ever come to market.

Chronographs first appeared in the Rolex catalog in 1937 utilizing movements from Valjoux. The initial single button two register pieces were soon followed by the now-familiar configuration of two buttons and three registers. The first oyster, the chronograph was the Ref 5034, followed by the 5035, 6034, 2334, which graduated to the 6238 and on to the ‘Cosmograph’ Daytona era. As so often with Rolex, the differences between references can be almost imperceptible and often seemingly trivial, with many parts interchangeable between these references, but this belies the importance of these collective improvements over time. The arrival of the Ref 6239 and 6241 did however bring significant change; whilst the case remained the same at the 6238, Rolex introduced the use of inverted colors for the chronograph sub-dial and the Tachymeter scale (used for measuring distance over time, aka, speed) was moved from the dial on to the watches enlarged bezel, increasing the watches diameter my 1mm, small changes that made a significant visual difference. Another step forward was with the references 6263 and 6265, the last of the manual wound Daytona’s, this time fitted with ‘Oyster’ cases and improved screw-down pushers to increase the watches waterproofness.

These references were available with a number of dial configurations. Whilst the exotic dialed variants, often known as ‘Paul Newman’ dialed watches are the least common, those with their retailer's name stamped to the dial are equally rare. In this instance, we have a highly desirable combination of ‘Big Red’ dial (in reference to the red Daytona text above the 6 o’clock register) combined with the ultra-desirable ‘Tiffany & Co’ text above the hands.

Rarely seen and ultra-desirable, these double-stamped Daytona’s don’t often find their way to the auction room, and this represents a rare opportunity to acquire such a unique and sought-after timepiece.