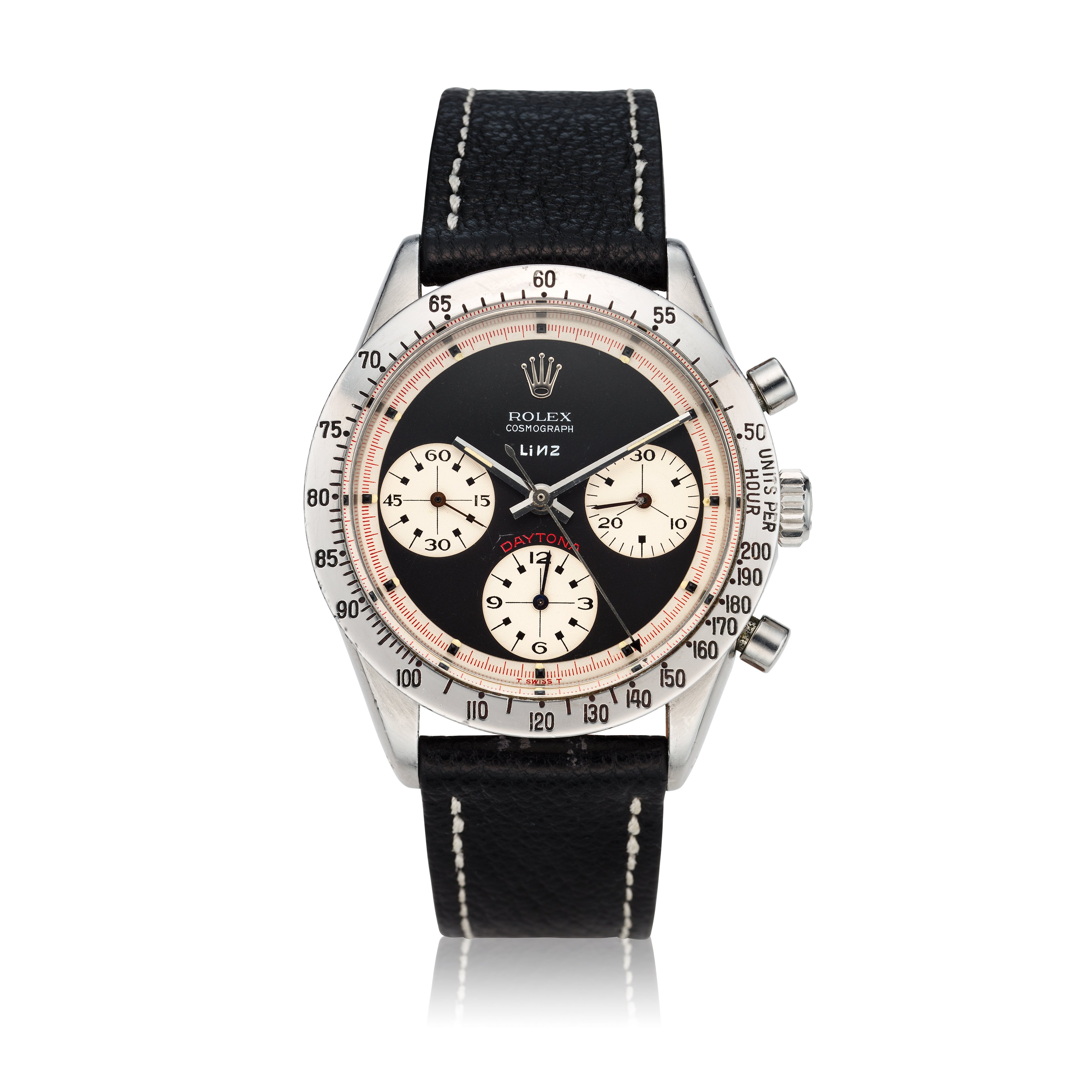 Retailed by Linz Brothers: A stainless steel chronograph wristwatch, Circa 1968

Case: The case is in overall good condition with surface wear throughout commensurate with age. Previous light polish. Some small nicks to the sides of the case. Inside caseback stamped 6239. Replaced crystal. Please note that the strap and buckle are generic and not signed Rolex.

Dial: The dial is in overall very good condition. The luminous plots all remain intact. The hands with light scratches.

Dials emblazoned with retailer signatures have long been revered by astute collectors for their ability to provide further context to already awe-inspiring watches. In their more conventional forms, iconic and sought-after timepieces like the Paul Newman Daytona are most definitely deserving of attention and praise, though, upon the addition of a history suggesting retailer’s signature, examples ascend to a new tier of both exclusivity and significance. Amongst scholarly authorities of the aforementioned jewel of vintage watch collecting, few signatures are as captivating and desirable as that of the Texas-based Rolex retailer, Linz Brothers, and especially so when found on a piece held in such high esteem.

This historic American retailer’s story begins in the 1870s after a curious Joseph Linz of St. Louis, Missouri had followed the railroad to Denison, Texas, soon discovering the art of watchmaking, and beginning to repair timepieces for the conductors and engineers of various railroads. It was this fateful brush with horology that lead to the decision of Joseph and Elias Linz to begin retailing jewelry and watches to the people of Denson, in October of 1877. The business would grow quickly in the years to follow, with brothers Simon, Ben, and finally, Albert Linz joining the firm upon their 1891 settlement in Dallas, Texas.

Following the eventual retirement of Joseph Linz in 1907, the retailer’s name would be changed from Linz to Linz Brothers, in an effort to better market the family-owned and operated nature of the retailer. By the time both the Linz Brothers and Rolex had established their respective presences within horology, a strong and prosperous relationship was quickly formed. Despite the infrequency with which Linz signed the dials of Rolex watches, they would be recognized in the decades to come as one of North America’s largest Rolex retailers.

In the interest of simplicity, the Rolex dials to which they applied retailer signatures in later years would simply feature the name, Linz. Such is this case with this reference 6239 Daytona of sensational importance, proudly bearing the retailer’s logo below the Rolex Cosmograph designation on its Paul Newman dial. Executed in white print against a matte black foreground, the backward N Linz logo stands out prominently, complementing the exotic dial’s three-color configuration. Providing an unequivocal answer to the example’s origins at first glance, this small detail elevates the watch from a blue-chip vintage chronograph of already extreme scarcity to one existing in even fewer numbers, and of particular significance to American collectors and historians of Rolex retailing alike.

Worth noting is how to reference 6239’s aesthetic straightforwardness makes it perhaps the purest Daytona reference in which to find a retailer-signed dial. Fitted with a stainless steel bezel and pump pushers, the reference’s intrinsic subtlety affords all the attention to the immensely special dial that earns this rarity its renown. With so few opportunities to acquire Paul Newman Daytonas of this configuration and condition, this example is sure to attract important collectors eager to simultaneously celebrate the histories of Rolex and that of the great American retailer, Linz Brothers.