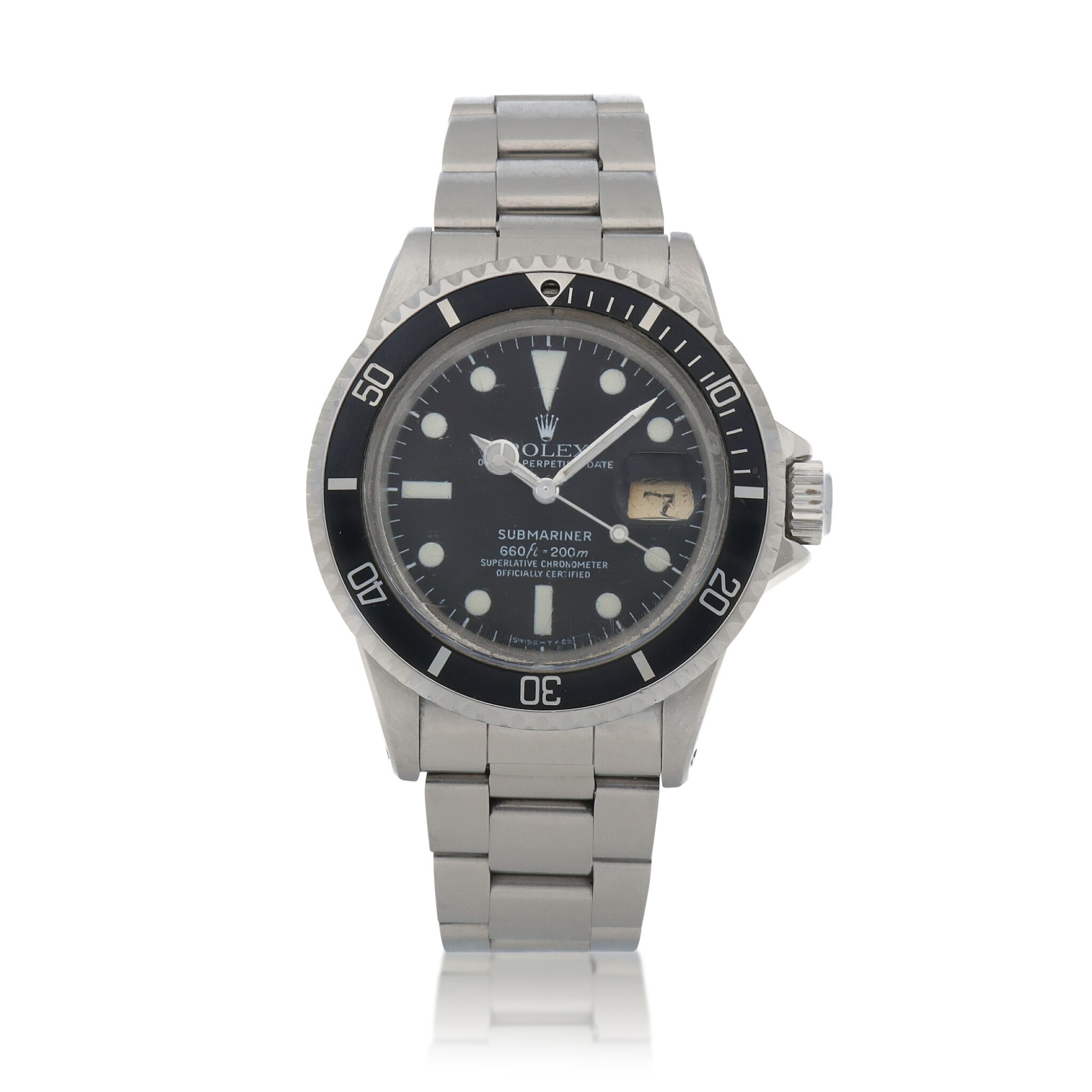 To request a condition report for this lot, please contact Patrick.Stebler@sothebys.com

An extremely important reference in the Submariner history, the reference 1680 was released in 1967 and produced until 1978. The new model brought with it the caliber 1575 which finally featured the anticipated addition of a date display, a convenient complication achieved by adding a date module to the trustworthy calibre 1570. Furthermore, the reference 1680 was waterproof up to 200 meters. And can be split into two main categories, cosmetically differentiated by their dial: the watches produced until 1976 would bear a red Submariner script while the later examples would bear only white text (with feet-first depth indication) on their dial.

The present example with its white text is an early example of this is somewhat distinguished from others of its kind. This particular watch is consigned to us by Mr Terry Wells Sr. a Propmaster with a long and distinguished career spanning 50 years of cinema, having worked with some of the most distinguished actors and directors in the history of the silver screen.

Mr Wells worked with Nick Nolte and Jacqueline Bisset during the production of the 1976 film 'The Deep', written by Jaws' author Peter Benchley. With large sections of the film captured underwater, it fell to Mr Wells to ensure that the ocean was free of sharks before the actors were called and the cameras started rolling. The film has since garnered a cult following especially among Rolex collectors who quickly noticed Nick Nolte's choice of wristwatch was indeed a Ref. 1680 Submariner. It is the present lot that Nick Nolte wore, and this watch that he then gifted to Mr Wells at the conclusion of filming.

The watch, made in 1975 features an engraving to the case back 'The Deep, 1976'. It retains good proportions having been serviced twice, but under the instruction of Mr Wells, was not polished. It is an honest and original example of the 1680 and one that has an exciting and documented provenance one that compliments the watch and its purpose wonderfully. Indeed, Rolex themselves created advertising around Peter Benchley and his using of Rolex Submariners in his pictures. This watch represents a great opportunity to acquire a piece of Rolex and movie history, and example of the Submariner that hasn't appeared at auction before, and likely won't again for some time.