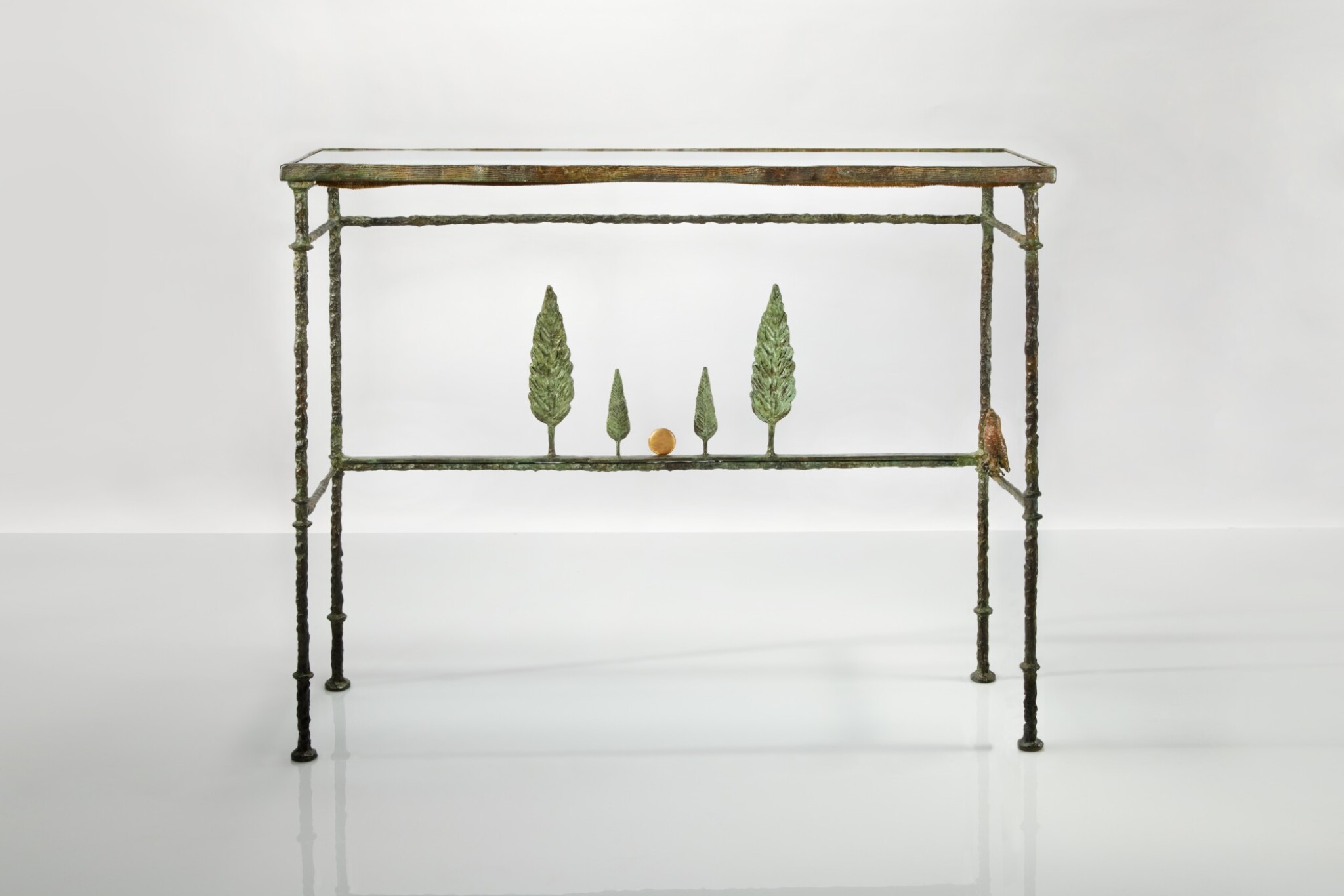 Overall in very good condition. An indisputable masterpiece by Diego Giacometti, the present console includes some of the artist’s most beloved motifs and exhibits a stunning and complex patina. The patinated bronze surfaces exhibit dark green tones overall with hints of dark russet brown and very subtle variations in color that enhance the sculptural quality of the work. The cypress trees present with a slightly lighter green color with hints of teal; the owl on the side rail is entirely coated in a beautiful russet brown patina; and the central disc exhibits a stunning gold patina which is enhanced when exposed against the light. The patinated surfaces of the console have recently been cleaned and reconditioned by a professional conservator with strong expertise in the work of Diego Giacometti, to revitalize the original depth and texture of the patina. The patinated bronze presents with very minor casting and surface irregularities inherent to production. The fabric liner to the underside of the console top, which is not visible unless closely inspected, presents with some gentle lifting and abrasions to the fabric edges. The clear glass tabletop is in very good condition and presents with faint surface scratches consistent with gentle use.

Two rows of delicately sculpted cypress trees draw the eye towards a glistening moon rising in the distance. To the side, perched on a ledge, an observing owl seemingly contemplates the serene scene. Such is the stunning setting created by Diego Giacometti for his work honoring Symbolist painter Arnold Böcklin.

Executed circa 1978, this important console encapsulates the artist’s masterful sense for composition and predilection for figuration. Here, Giacometti treats the central component of the piece like a painting’s canvas, unusually allowing himself to play with linear perspective and to create the illusion of depth in the form of two lines of cypress trees. The moon-shaped disc forms a focal point, the convergence of all lines in the composition, and is further emphasized by a gold patina that adds vibrant brightness. The rest of the piece is coated in the artist’s signature patina, a wonderfully complex and dynamic finish ranging from shades of teal visible on the trees to dark russet brown hues on the owl, adding depth and enhancing the figurative elements in the composition.

While the owl constitutes a familiar motif in the artist’s bestiary, the present console marks Giacometti’s first use of a gold disc in his furniture pieces— a semi-figurative element that Daniel Marchesseau has interpreted as the rendition of a rising moon. Similar discs, though slightly larger, appear in two later works with related compositions: the Console aux Cyprès (circa 1980) and Grande Console aux Cyprès (circa 1981), both of which also incorporate cypress trees.

It is unclear why those later pieces, given their close proximity in subject matter, do not similarly reference Böcklin in the title. Arnold Böcklin was a mid-19th century Swiss artist whose strange and fantastical paintings steeped in Romanticism were an important influence upon the Symbolists in France and the Pre-Raphaelites in England. Many of Böcklin’s paintings function as imaginative and somber interpretations of classical legends or portray mythological subjects in ancient settings, often filled with allegories pertaining to death and mortality. His oeuvre was somewhat re-discovered by the Surrealists (Max Ernst, Marcel Duchamp and Giorgio de Chirico in particular), all of whom were close to the Giacometti brothers. They praised his use of macabre and dreamlike imagery, prompting de Chirico to declare that “each of Böcklin's works is a shock."

The Symbolist painter’s most celebrated series, The Isle of the Dead (1880-1886), which the composition of the present console assuredly emulates, shows a shining figure in white approaching the rocky and cypress-filled shoreline of a mythical Greek island, whose eerie setting is said to be based on English Cemetery in Florence where his daughter was buried. The subject of these paintings references the mythological figure of Charon, the ferryman who carries souls of the newly deceased across the river Styx. Charon became a recurring leitmotif in Symbolist and pre-Raphaelite movements through paintings by John Roddam Spencer Stanhope, Edward Burne-Jones and José Benlliure.

Böcklin and Giacometti, in addition to sharing a nationality, both found inspiration in the countless narratives and characters populating Greek mythology. Though his motifs of predilection primarily revolved around animals, some of Diego Giacometti's favorite subjects included figures derived from Greek myths and ancient architecture. Harpies and caryatids were welcome additions to his plaster and bronze creations— his caryatids in particular, which strangely echo the statuesque figure from Böcklin's Isle of the Dead, are often prominently placed on the outer railings of large tables.

Few pieces by Diego Giacometti feature such a carefully-assembled selection of delicate motifs and classical references. The beauty of the piece resides in its handsome composition and the harmonious coexistence of superb figurative elements immortalized in bronze. Along with functioning as an artistic reflection on Böcklin and Symbolist painting, the "Hommage à Böcklin" Console stands out as a sculptural achievement in its own right and an incontestable masterpiece by Diego Giacometti.