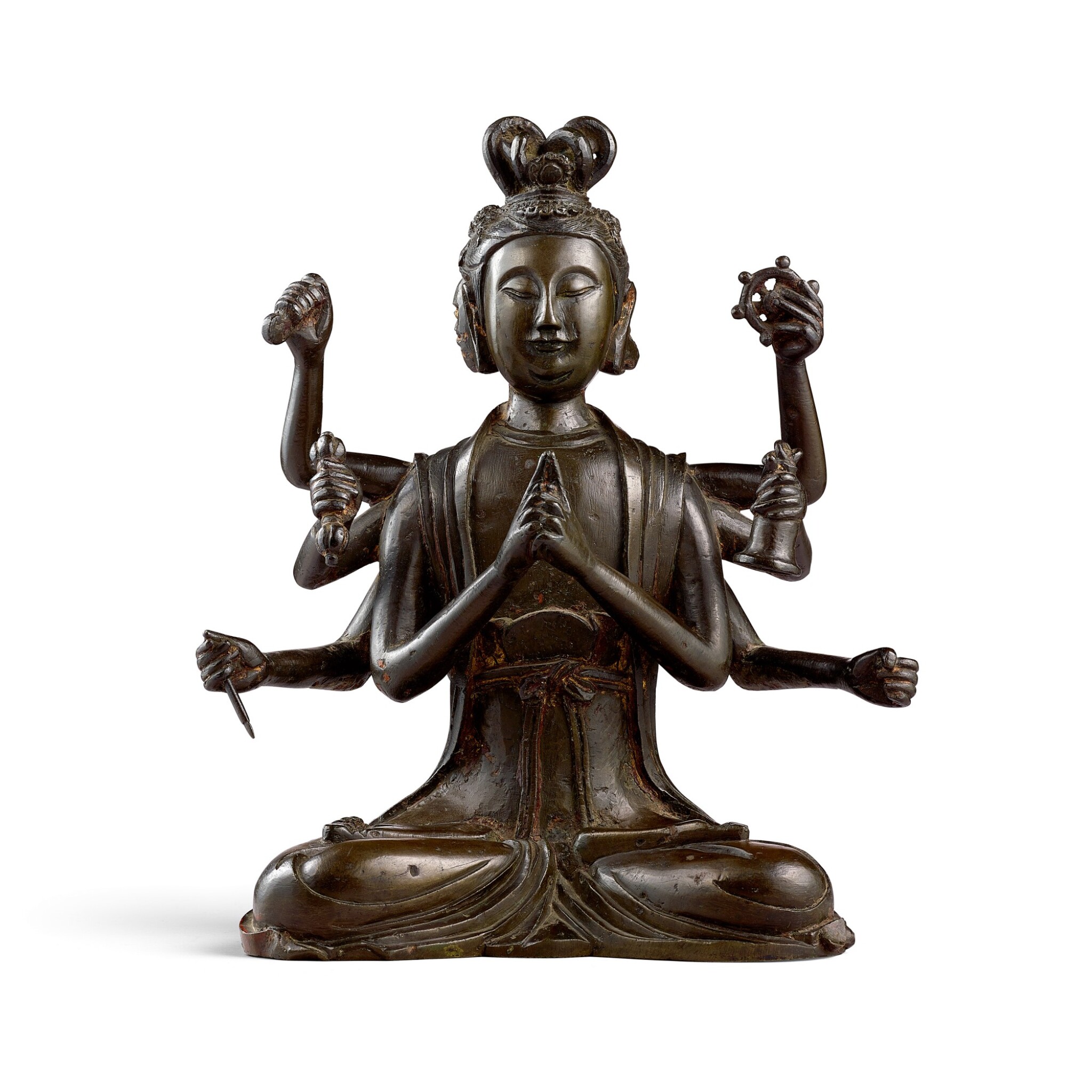 the eight-armed Tantric deity portrayed with two demonic faces on the reverse of her meditative facial expression, depicted seated in vajraparyankasana and holding attributes in her secondary hands, traces of gilt-lacquer

Marici (Molizhitian) is known as the Goddess of the Dawn or Queen of the Heavens. She represents compassion and the vanquishing of evil. She was widely revered in the Yuan dynasty, when the Mongol court was deeply influenced by the Tantric Buddhism of Nepal, and she had a strong following in warrior cultures flowing around the Steppe with Mongol and Manchu peoples. That warrior link is why she is usually only represented artistically in China during the Yuan and Qing dynasties.

As Vajravarahi, she is believed to be the incarnate of every successive abbess of the Monastery of Semding. Legend has it that one of these abbess had a growth behind her ear which resembled a sow's head. When the Mongol warrior, Dzungar came to attack the monastery, he called out for her the abbess to come out to show her sow's head. When he and his army destroyed the walls of the monastery, all they found were a group of sows and pigs inside led by a sow larger than the rest of the group. Dzungar was so amazed that he stopped the pillage, at which the sows and pigs transformed into monks and nuns; the largest sow transformed into the abbess. Dzungar was so amazed at the miracle that he converted and enriched the monastery.

A 13th to 14th century Nepalese stele with Marici in her pig-drawn vehicle, preserved at Chengde, the summer retreat of the Qing emperors, is illustrated in Buddhist Art from Rehol, Chang Foundation, Taiwan, 1999, cat. no. 23.

It is extremely rare to find a Yuan bronze figure if this stature and quality. A stylistically comparable seated bronze figure of Guanyin, dated to 1339, illustrated in The Second Bronze Age. Later Chinese Metalwork, Sydney L. Moss Ltd, London, 1991, cat. no. 1. is now preserved in the British Museum.