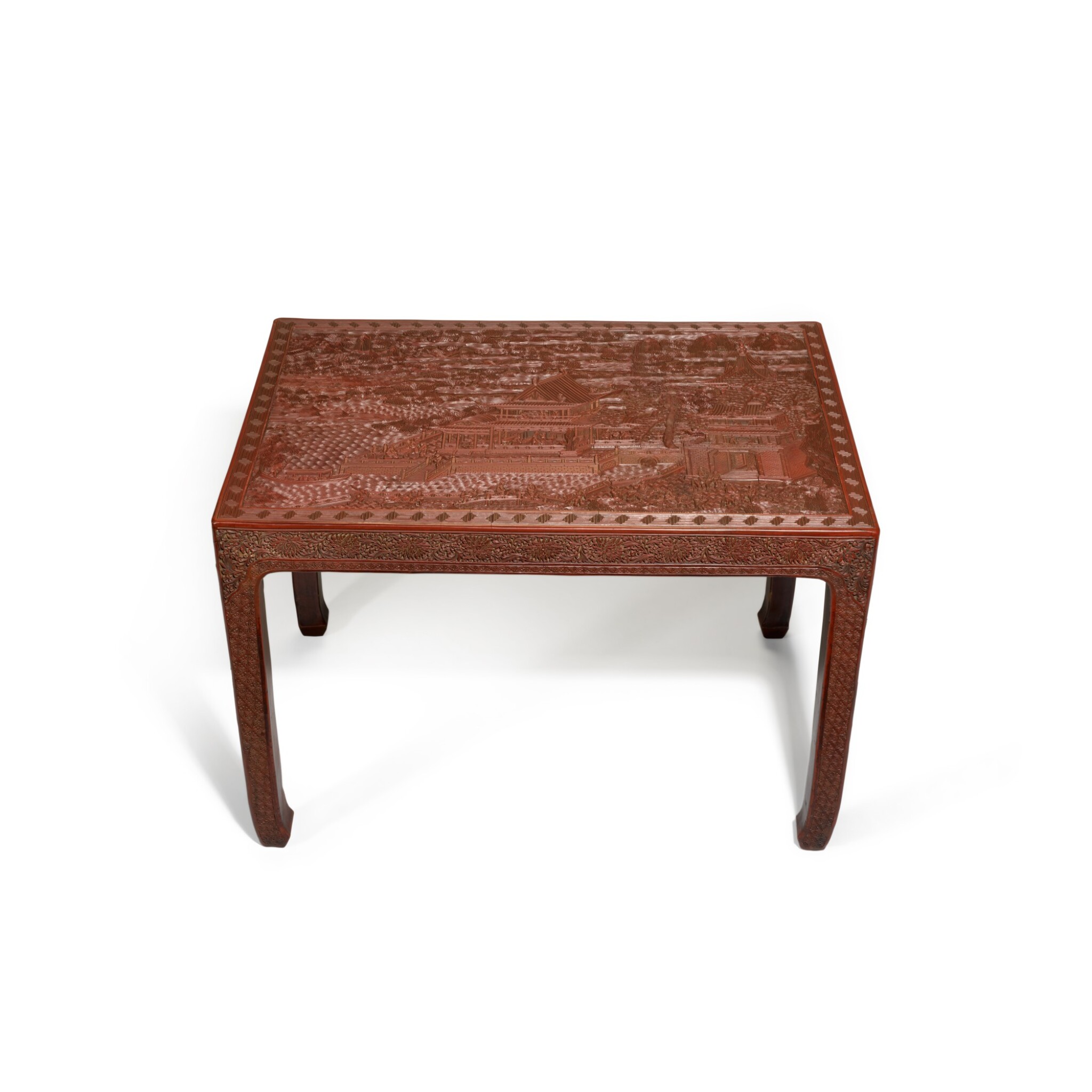 the rectangular top finely carved with scholars engaged in leisurely pursuits within a mountain top pavilion complex, supported on a straight waist carved with lotus and on four square section legs carved with diaper and terminating in hoof feet

Please note that this lot should have a W symbol in the catalogue. This will be sent to Sotheby's Greenford Park Fine Arts Storage Facility immediately after the sale.

Thence in the family by descent.

This small and very elegant table is magnificent in the simplicity of its structure and the fluidity of the overall carved cinnabar lacquer design, making it a quintessential example of the sophisticated 'literati' taste in furniture. Because of its diminutive size and the subject matter depicted, we can assume that it was made for a scholar's studio, to be placed alongside prized scholarly works of art.

Carved lacquer furniture emerged in the early Ming dynasty during the reign of the Yongle emperor (r. 1402-1424). His fascination with carved lacquerware, a material far more precious and laborious to produce than porcelain, resulted in some of the most magnificent lacquerware ever made in the Imperial workshops. Lacquer was a material that was applied in layers before being carved, and it could be carried out according to the shape of the piece including on larger and more complex works such as furniture. As the production process was technically challenging and extremely time-consuming, very few larger pieces were made. Among the best known are the famous table in the Victoria and Albert Museum, London, and its pair in the Linden-Museum, Stuttgart, as well as also smaller pieces of furniture such as a carved cinnabar lacquer stool formerly in the Fritz Low-Beer Collection also in the Linden-Museum, Stuttgart, published in Michel Beurdeley, Chinese Furniture, Tokyo, New York and San Francisco, 1979, pp. 97-105.

Few examples of carved lacquer furniture appear after the 15th century, among them a small cabinet inscribed and dated to the Wanli period (1572-1620) of the Ming dynasty, ibid., p. 102, fig. 139-41, and a small low table in the Museum of Applied Arts, Frankfurt, dated to the 17th century, illustrated in Gunhild Gabbert, Ostasiatische Lackkunst, Frankfurt am Main, 1979, pp. 23-24, cat. no. 9.

Stylistically, the carving on these pieces of lacquer furniture is very different from the carving on this small table which is characterized by the several distinguishing features. Firstly, the lacquer is a distinctive, slightly dull reddish-brown colour. Secondly, the overall design is very dense and detailed, literally filling up the all available surface space. Thirdly, the carving has a general sense of great movement and restlessness that extends from the pictorial landscape scene on the table top to the floral borders on the sides and legs. And lastly, the carving style can be described as very sharp, almost angular, with deep slanted cuts leaving sharp unpolished ridges.

These characteristics are representative of a small group of carved lacquer ware that flourished throughout the Ming dynasty, independent of wares that were produced in official workshops. Some of these features match those attributed by late Ming dynasty authors to carved lacquerware from Yunnan province [Sir Harry Garner, Chinese Lacquer, London, 1979, pp. 131-134], an attribution that has until recently been accepted but that is now being challenged, see Walter Borgers, ‘Made in Yunnan’ – Ueberlegungen zur Eingrenzung und Datierung einer Gruppe chinesischer

Schnitzlacke’, Lacklegenden. Kompendium Internationaler Lackkunst. Festschrift fuer Monika Kopplin, Muenchen, 2013, pp. 15-25. Today, around 70 pieces of carved lacquer are known that belong to this group. Eleven of these are in the collection of the Palace Museum in Beijing, the remaining pieces in international museum and private collections. They comprise dishes, trays, boxes, bowls, stemcups but not a single piece of furniture, suggesting that this table is unique.

The designs on pieces in this group vary yet among recurring motifs are very lively scrolling peony bands, very similar in style to those carved around the four sides and corners of the present table. Pictorial designs such as on this small table, are rare and, according to Walter Borgers, are found on only eleven of the pieces in this group, [Walter Borgers, ibid., p. 21. The pictorial scene depicted on the top of the table may represent the subject of the ‘Eighteen Scholars descending on Yingzhou’, an illustration of eighteen scholars who were summoned by the future Tang emperor Taizong (r. 626-649) to form the Hanlin Academy, an elite institution of the most accomplished scholars. The image on the table top does indeed depict eighteen scholar-gentlemen engaged in music, chess, calligraphy and painting, the ‘four accomplishments’ considered essential to the scholarly elite, while a high-ranking gentleman, possibly Tang Taizong, approaches. The gathering takes place in a setting that is remote and hidden in the clouds, the cranes suggest the immortal lands of Yingzhou, a mythical island in the Eastern Sea inhabited by immortals. The scene is highly symbolic and the subject popular with literati in the Ming dynasty as it conveyed the wish for successful promotion.

Overall, this elegant small table is a rare discovery, rare for being a piece of carved lacquer furniture and rare for belonging to a distinctive group of lacquer ware that are only beginning to be recognized for their quality and variety.