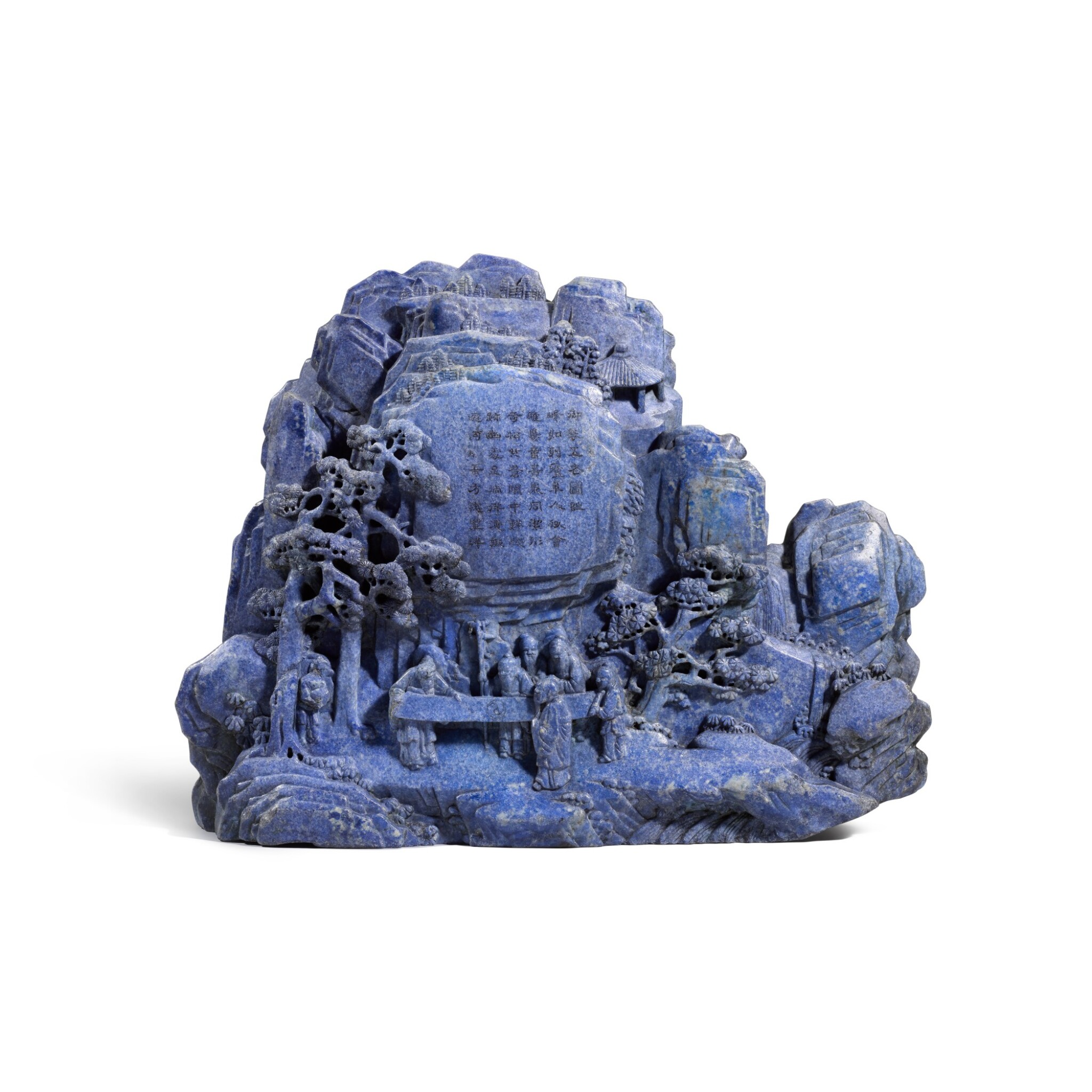 the substantial boulder of mountain form, meticulously carved in various levels of relief portraying a gathering scene of five elderly immortals gathered appreciating a scroll with the yinyang symbol, with their attendants in a secluded landscape setting amongst gnarled pine and wutong trees, inscribed on the rock face with an imperial poem titled the 'Scene of the Five Elders', the reverse carved with three scholars engaged in a game of chess, the stone of a bright purplish-blue colour suffused with milky-white inclusions

There are minor nicks and small losses to the edges and raised parts of the carving, and a few small areas of old restoration to the rocks.

Carvings fashioned from lapis lazuli are very rare. What makes this piece even more exceptional is the massive size of the stone, which appears to be one of the largest examples to have been published. Compare two other large imperially inscribed carvings but of smaller size than the present lot, both preserved in the Palace Museum, Beijing: one of deep blue colour, incised with an imperial poem on the Nine Elders of Huichang and carved with a mountainous landscape scene; the other slightly darker in colour than the present piece, rendering a palace and inscribed with two verses composed by the Qianlong Emperor (r. 1736-95) while he was travelling in Wansong Shan.

The present boulder is completed by a poem written in 1766 by the Emperor, included in Qing Gaozong yuzhi shiwen quanji / Anthology of Imperial Qianlong Poems and Texts, Yuzhi shi san ji (Imperial poetry, vol. 3), scroll 57, p. 18. Entitled Ti Hetian yu wulao tu ('On the Khotan jade depicting the Five Elders'), the poem praises not only the carving of the figures and the mountains, but also a desirable carefree lifestyle. The same verses can be found on a white jade brush pot, sold in these rooms, 24th February 1970, lot 130 and again in our Hong Kong rooms, 8th October 2019, lot 118. Single Qianlong poems were sometimes used on multiple pieces; see a lapis lazuli luohan boulder preserved in the National Palace Museum, Taipei (accession no. gu-za-753), incised with the same inscription as the one carved on a celadon jade luohan boulder, formerly in the Metropolitan Museum of Art, New York, recently sold in our New York rooms, 10th September 2019, lot 17.