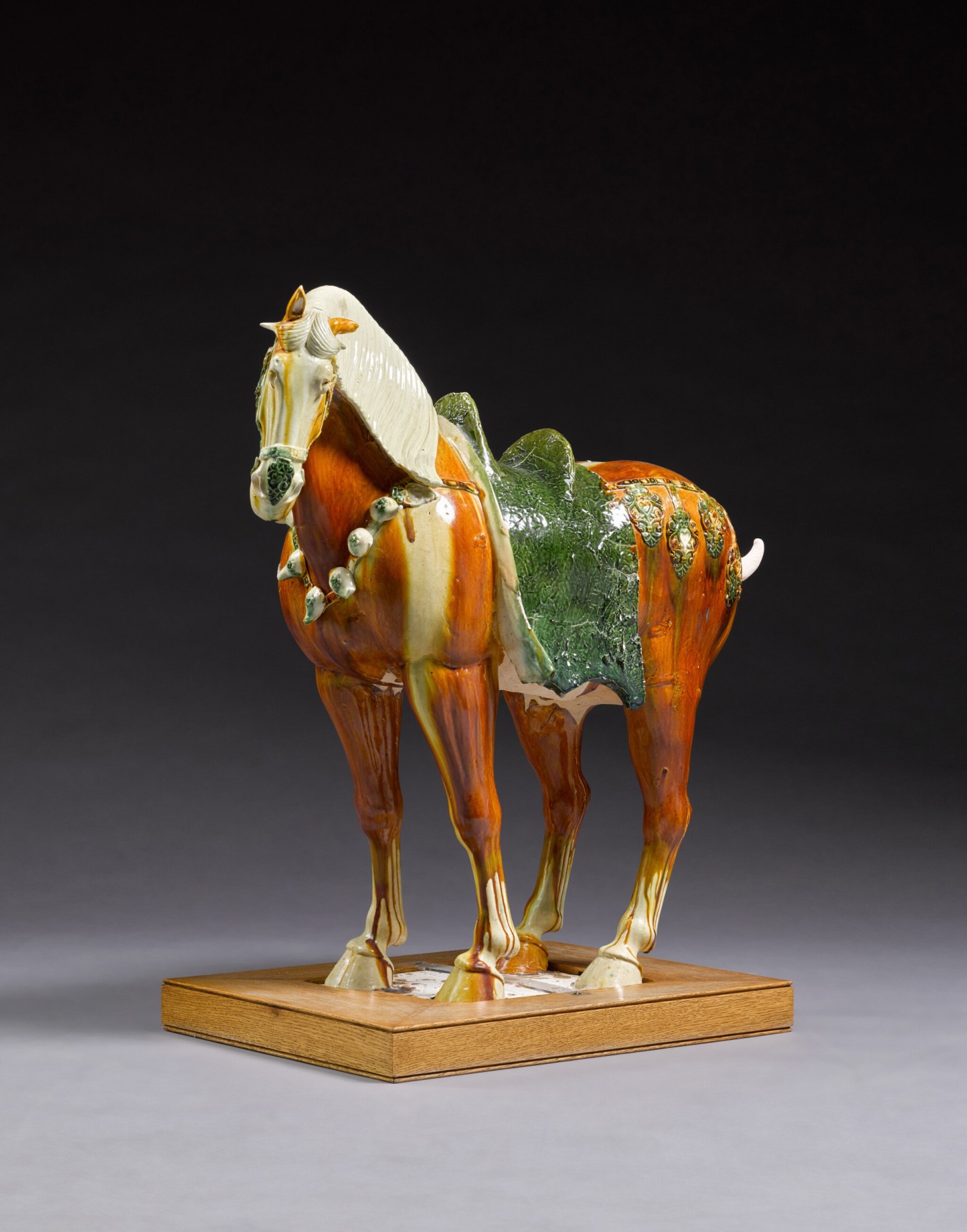 A magnificent large sancai-glazed figure of a caparisoned Fereghan horse

superbly modelled, standing four square on a rectangular plinth, the harnessed head turned slightly to the left with ears picked, the long mane parted at the forelock and falling to one side, covered in a straw-coloured glaze, the dark green saddlecloth roughened to simulate fur, the muscular body glazed predominantly in rich chestnut suffused with straw-coloured streaks

This magnificent horse is exceptionally modelled and glazed, the powerful body well-defined of rounded and muscular form, the fine sancai (three-colour) glazes dramatically running down its well-built body. The potter who sculpted and glazed this piece has aptly brought to life the horse's strong physicality and spirited nature, showcasing the superior craftsmanship achieved during the Tang dynasty (618-907). As a symbol of status and wealth, ownership of horses in life as in death reflected the high rank and importance of their owners at the time, when strict sumptuary laws declared the right to own horses as an aristocratic privilege. Horses of the most prestigious breed, known as ‘blood-sweating horses’, which is represented in the present piece, were sent to China as tribute from the Ferghana Valley in Central Asia during the Tang court’s vigorous expansion to the west. This magnificent horse figure is covered overall with the renowned sancai glazes, coloured with copper and iron to create a lively spectrum of greens and ambers over a white-slipped ground. It is exemplary of sculptures created for important tombs during the Tang period.

Compare a few closely related sancai horses glazed in similar colours and with a long mane, furry saddle cloth and elaborate trappings as the present piece; one with straight forelock excavated in 1963 at Guanlin Tomb no. 2, Luoyang, illustrated in Luoyang Tang Sancai / The Sancai Wares of the Tang Dynasty in Luoyang, Beijing, 1980, pl. 72; one with a knotted tail and of slightly taller size, excavated in Luoyang, Henan province and now in the National Museum of History, Taipei (accession no. h30), included in the Museum’s exhibition The Special Exhibition of Tang Tri-colour, Taipei, 1995, illustrated on the cover of Liu Liang-yu, A Survey of Chinese Ceramics, vol. 1: Early Wares: Prehistoric to Tenth Century, Taipei, 1991; another one with feet and tail glazed in different colours and again straight forelock, in the Collection of Mr and Mrs Ezekiel Schloss, illustrated in Ezekiel Schloss, Ancient Chinese Ceramic Sculpture: from Han through T’ang, vol. 2, Stamford, 1977, pl. V; and a slightly taller piece, with a large cream splash on the left shoulder as the present horse, but with a narrower neck and open mouth, from the Jingguantang Collection in the Tsui Museum of Art, illustrated in The Tsui Museum of Art. Chinese Ceramics I. Neolithic to Liao, Hong Kong, 1993, pl. 90, sold in these rooms, 10th June 1986, lot 15, and at Christie’s New York, 20th March 1997, lot 53, and again 16th March 2015, lot 3225.

The dating of this lot is consistent with Oxford Authentication Thermoluminescence Analysis Report no.C198k8.