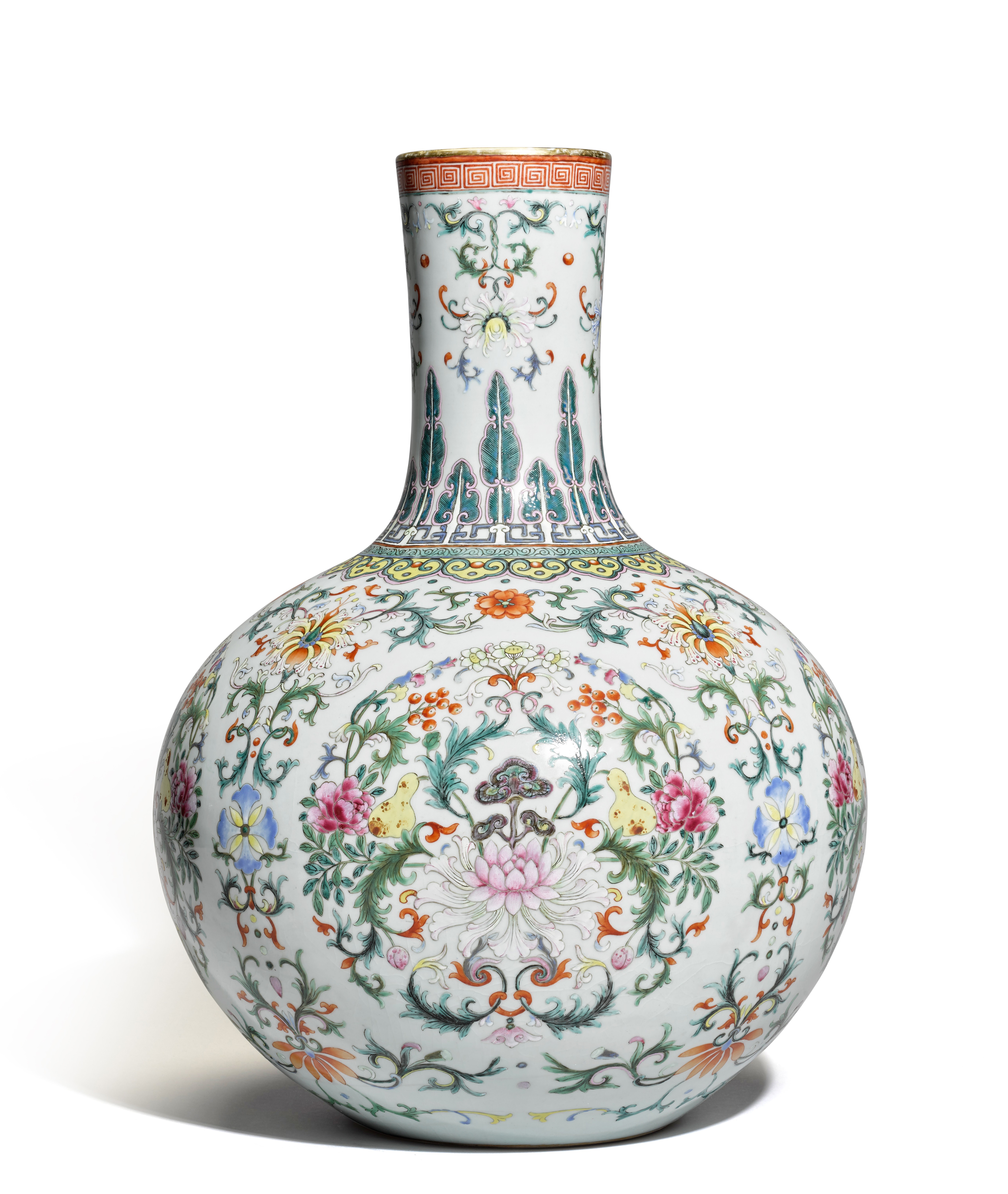 robustly potted with a globular body rising to a tall cylindrical neck flaring slightly at the rim, painted around the body in vibrant enamels with four elaborately decorated large floral medallions, each comprising a lingzhi fungus and a prominent lotus bloom at the centre borne amidst dense scrolling leaves issuing further floral blossoms and fruits, surrounded by leafy steams issuing multi-coloured flower blooms, the shoulder encircled by ruyi pendent, the neck with stylised upright leaves, inscribed to the base with a six-character seal mark in underglaze blue

The neck has been broken in several U-shaped sections extending from the rim to half way down the neck and restored. There is a circa 25cm., wide star glaze crack to the lower body and glaze crackles encircling the lower half of the body. Some stained glaze lines running over the base of the vase, probably contemporary to firing, and minor wear and losses to the enamels.

This magnificent vase is impressive for the vibrant pastel-toned enamels painted against a celadon ground of the very palest hue. The term tianqiuping, sometimes translated as 'celestial sphere vase', derives from the vase's form, which is characterized by a generously proportioned globular body surmounted by a tall cylindrical neck. During the Qianlong period (1736-96), when tianqiuping gained prominence, these vessels were produced in varying sizes. The sheer size of the larger versions, such as the present piece, would have given them a commanding presence in one of the great halls or rooms in the Imperial Palace.

Western designs, such as stylised and symmetrically arranged scrollwork, were brought to the Qing court (1644-1911) by European craftsmen during the Kangxi reign (1662-1722). Stylistically, the decoration of the present vase, which elegantly combines European decorative elements with Chinese auspicious motifs such as ruyi-heads and stylised lotus, is representative of the early Qianlong period, when Tang Ying (1682-1756) was supervisor of the Jingdezhen manufactories and the Emperor sent orders with very specific instructions to the kilns. Compare a related tianqiuping, of the same imposing size, painted with a wide band of foliate lotus and flower scroll painted around the body, ruyi lappets encircling the shoulder and rim, sold in our New York rooms, 27th November 1990, lot 199.

Although vessels with this formal flower decoration come with various coloured grounds in the Qianlong period, the use of a high-fired celadon glaze rather than a low-fired enamel colour for the ground is rare. This special palette suggests that the present vase may have been created to an individual order rather than forming part of a larger series. One element that distinguishes the wonderfully colourful design on this vase are the four lingzhi fungi, vividly painted in a

kaleidoscopic blend of blue, green and purple enamels. Lingzhi or ‘divine fungus’ were believed to be a magical substance, revered for their supposedly immortal qualities. Daoist alchemists claimed that by consuming lingzhi one could attain immortality. The Qianlong emperor appreciated lingzhi as a motif, possibly because of their unusual natural shape. The lingzhi itself was often depicted in the form of the wish-granting ruyi (‘according to your wish’) sceptre such as on all four sides on this vase.

Designs featuring lingzhi appear on many different materials and take on many different shapes. However, examples of imperial porcelains made under the Qianlong emperor are rare. Compare, for instance, a smaller pair of yangcai vases, also painted with similar lingzhi motifs amongst formalised flower scrolls, but of zun form and with a white ground, mentioned in the Imperial Workshop Records (Huoji dang) in the seventh year of the Qianlong reign (1742), previously preserved in the Hall of Mental Cultivation (Yangxin dian) in Forbidden City, Beijing, now in the National Palace Museum, Taipei (accession nos gu-ci-4329 and gu-ci-17241), included in the Museum’s exhibition Stunning Decorative Porcelains from the Ch’ien-lung Reign, Taipei, 2008, cat. no. 33.