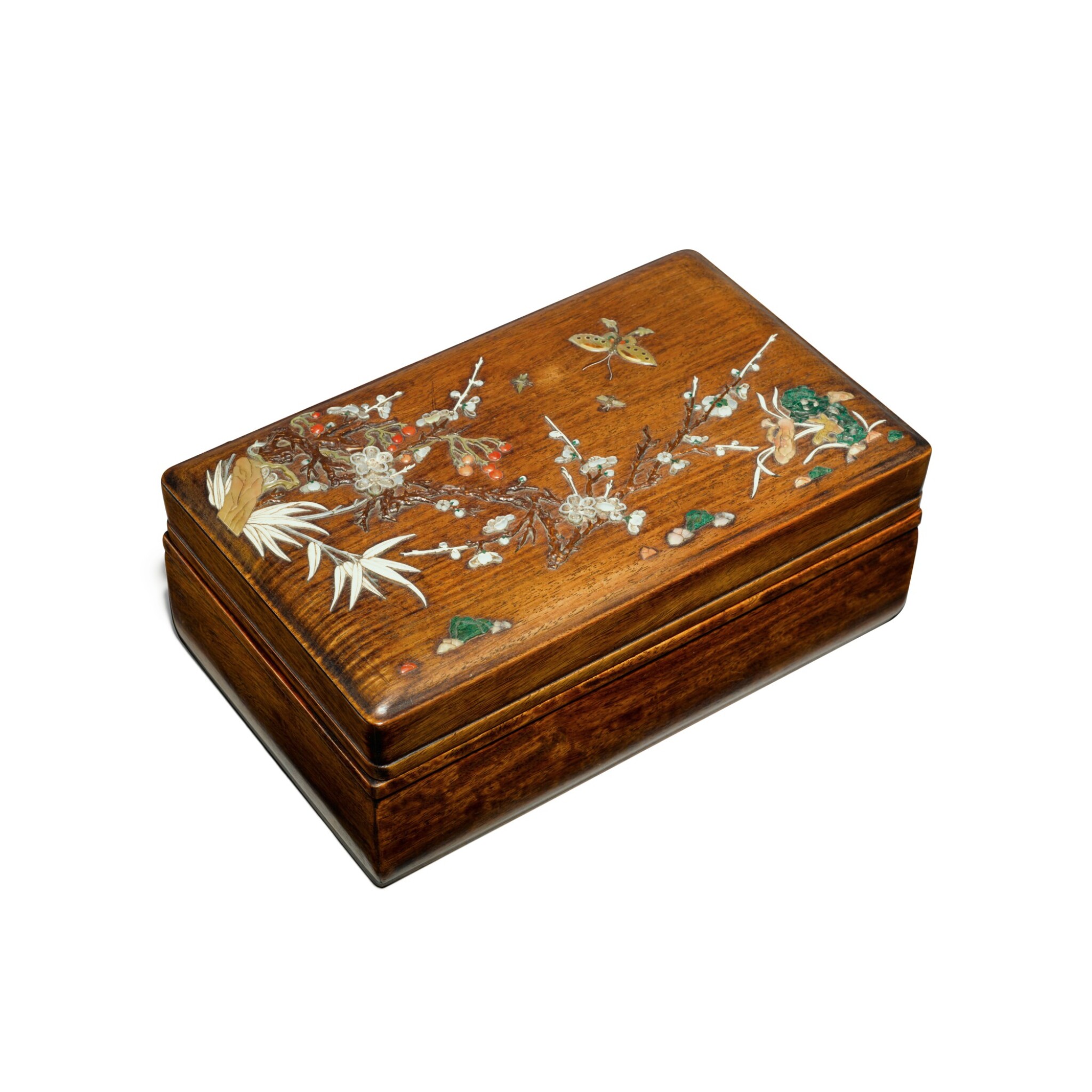 An embellished 'huanghuali' box and cover

of rectangular form, the cover inlaid with a gnarled prunus branch sprouting from a rock and bamboo outcrop in the upper left corner and sprawling across the composition, the branch comprised of stained wood and issuing mother-of-pearl blossoms and carnelian buds, the bamboo with mother-of-pearl stalks bearing bone leaves, all above various hardstone 'boulders' scattered along the ground and a soapstone lingzhi in the lower corner, mother-of-pearl and hardstone butterflies soaring above, the inner tray and box unadorned (3)

Box and cover are in general good condition, there has been consolidation to the joinery, and restoration to the inlaid decoration, replacing lost elements. The surface with expected wear, some minor losses to the inlay, with minor nicks along the edges, consistent with age and use.

Zitan and huanghuali scholar's objects embellished with mother-of-pearl and hardstone motifs came into vogue in the late Ming dynasty and continued to enjoy popularity in the subsequent Qing period. The present box has a nearly identical composition, and the same three-dimensional carving to the prunus blossoms, as a box attributed to the 18th century formerly in collection of Dr. Ip Yee, and sold twice in our Hong Kong rooms: 19th November 1984, lot 99, and 8th April 2011, lot 3311. The carving quality and compositional style is also comparable to an inlaid zitan table screen, brushpot, and box and cover attributed to the early and mid-Qing dynasty from the Qing Court Collection, now in the Palace Museum, Beijing, published in The Complete Collection of Treasures of the Palace Museum: Bamboo, Wood, Ivory and Rhinoceros Horn Carvings, Hong Kong, 2002, pls 229, 238, and 240, respectively. See also a related inlaid huanghuali 'prunus' brushpot attributed to the Kangxi period sold at Christie's Hong Kong, 27th November 2005, lot 1485. For a Ming dynasty precursor to the present box, see one by Sun Kehong (1533-1611) inlaid with a flowering prunus tree and a poem, published in Elegantly Made: Art for the Chinese Literati, J.J. Lally & Co., New York, March 2020, cat. no. 7.