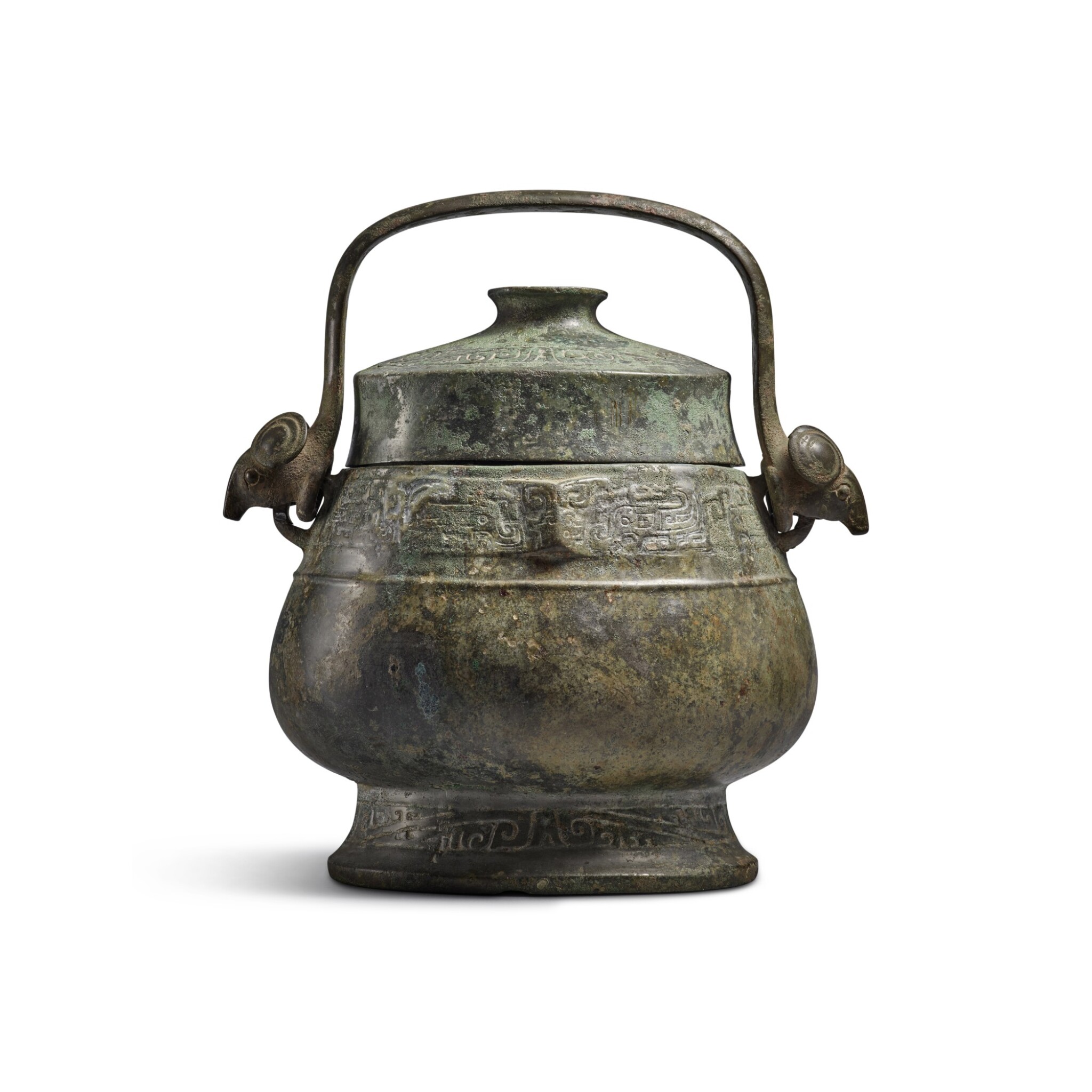 An archaic bronze ritual wine vessel and cover (You)

of oval section, the pear-shaped body rising from a splayed foot, the lower body unadorned and the shoulder cast with a raised fillet below a register of elephantine creatures confronting a high-relief bovine mask at the center of each broad side, the narrow sides of the shoulder each set with a loop connecting a swing handle with tapir-form finials at the ends, the foot and the sloping cover each cast with a band of continuous scroll and the latter rising to a flaring oval finial, the olive-green patina mottled with malachite, azurite, and encrustations (2)

There is restoration to both loops on the shoulder. A possible minor repair to a small section of the foot rim. Otherwise, in overall good condition with some expected general wear. X-Ray available upon request.

The present you is distinguished by the three-dimensional tapir heads at the terminals of the handle and the frieze of mythical creatures with long elephant-like trunks walking in single-file around the shoulder of the vessel. These features also appear on you attributed to the early Western Zhou period, including one from the Arthur M. Sackler Collection, now in the National Museum of Asian Art, Smithsonian Institution, Washington, D.C., published in Jessica Rawson, Western Zhou Ritual Bronzes from the Arthur M. Sackler Collections, vol. IIB, Washington, D.C.  and Cambridge, 1990, pl. 72; and one excavated at Mapo, Luoyang, Henan province and published in Chen Peifen, Xia Shang Zhou qingtongqi yanjiu: Xi Zhou pian, Shang [Study of Bronzes of the Xia, Shang and Zhou Dynasties: Western Zhou, vol. 1], Shanghai, 2004, no. 267. Related you that also feature tapir-form termini on the handles but other motifs in the decorative frieze at the shoulder, and are generally attributed to the second half of the early Western Zhou / middle Western Zhou period, include: one also from the Sackler Collection and now in the National Museum of Asian Art (acc. no. S1987.292a-b) with long-trunked dragons in the frieze, published in Rawson, op cit., pl. 73; one in the British Museum, London (acc. no. 1947,0712.329) with birds in the frieze, published in Rawson, op cit., fig. 72.4; another with birds in the frieze, now in the Princeton University Art Museum, Princeton (acc. no. y1965-6 a-b), illustrated in Rawson, op. cit., pl. 74; a third with birds sold in our London rooms, 7th December 1993, lot 4; one excavated from Luoyang with no frieze, attributed to the period of King Zhao (r. 977/75–957 BC), and published in Chen, op. cit., pl. 265; and another with no frieze, known as the 'Zuo Ce Huan' you, sold in these rooms, 17th September 2013, lot 8.