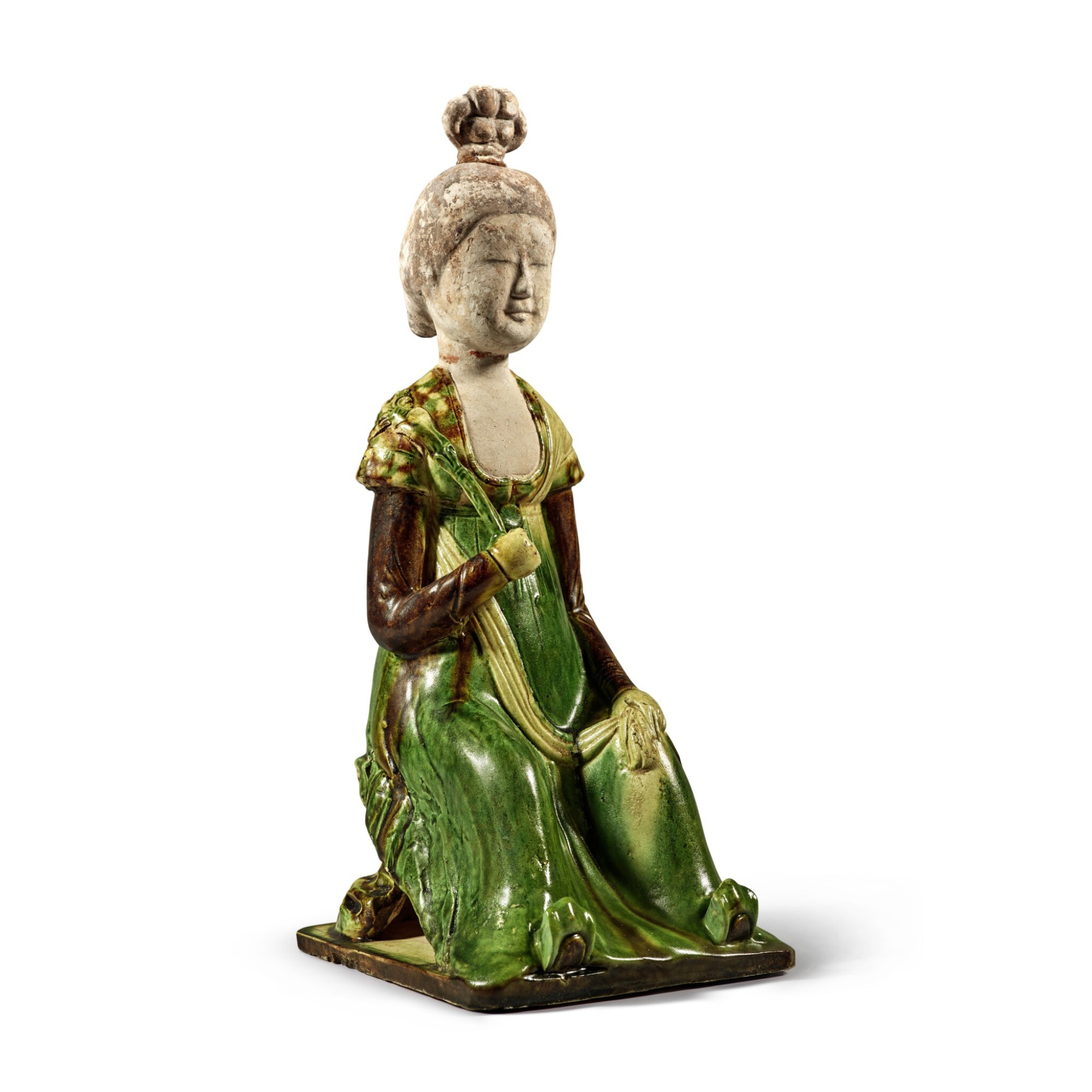 A sancai-glazed pottery figure of a seated court lady

seated on a waisted dappled rockwork stool on a rectangular base, dressed in a long gown with a low neckline, cap sleeves, fitted bodice, and voluminous folds covering the body and legs, the pointed toes of the shoes emerging from beneath the hemline, a shawl draped over the shoulders and falling across the front of the torso, the end of the shawl grasped in the left hand resting on the knee, the right hand lifted in front of the chest and holding a stylized flowering stem, the oval face looking directly ahead and framed by long hair tied into an elaborate topknot, applied allover with vibrant green, amber, and cream-colored glazes save for the décolleté, face, and hair

The head and topknot have been reattached. Scattered patches of infilled losses, overpaint, and clear overspray. Lower half of the piece is covered with overspray. An approx. 0.4 cm long chip at the scepter. Overall with minute scattered nicks.

Compare two figures of almost identical design: one sold in these rooms, 28th October 1977, lot 8, and the other sold at Christie's New York, 1st December 1994, lot 366. See also a related, more elaborate figure, with high winged coiffure and beaded necklace, formerly in collections of Captain S. N. Luboshez and the C. C. Wang Family, which was exhibited in Chinese Art from the Ferris Luboshez Collection, University of Maryland Art Gallery, College Park, 1972, cat. no. 85, and sold three times in these rooms: 18th November 1982, lot 57; 1st June 1988, lot 88 and 16th March 2016, lot 272. Another seated lady, illustrated in Tseng Hsien-Ch’i and Robert Paul Dart, The Charles B. Hoyt Collection in the Museum of Fine Arts: Boston, vol. 1, New York, 1964, pl. 87, holds a stylized blossom but is attired with a phoenix headdress and green-dappled gown.