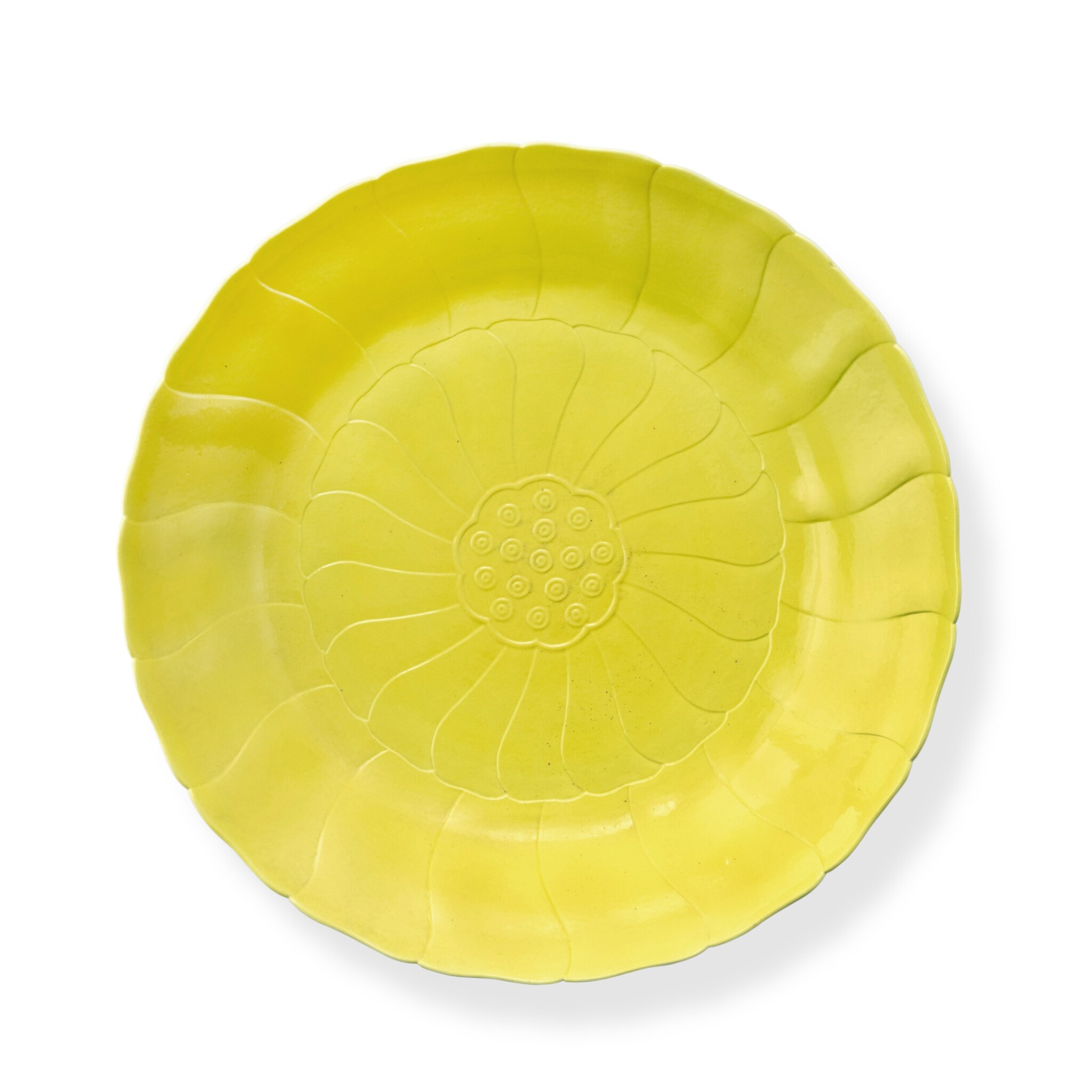 finely molded as a lotus bloom, a scalloped seed pod at the center with two registers of overlapping petals radiating across the base and cavetto to form a gently contoured rim, the exterior similarly molded as a series of undulating petals, all under a vibrant opaque lemon-yellow enamel, the recessed base white and with a six-character mark within a double circle in underglaze blue

In general good condition, except for an approx. 5-cm hairline crack to the mouthrim. Some expected light wear and minor firing imperfections, including some very minor speckling to the interior enamel.

Collection of the Forbes, The Lords Clinton, Bowes-Lyon, and Somervell families, all of Fettercairn House, Kincardineshire.

The present dish belongs to a small group of dishes with the same enameling and form produced at the Yongzheng Imperial kilns. Rather than being glazed in the traditional manner, these wares were coated entirely in an overglaze enamel involving lead antimonate and zinc, that was fired at a low temperature to achieve this distinctive lemon-yellow color.

Several examples of such dishes are preserved in major collections, including one from the Percival David Foundation, now in the British Museum, London (acc. no. PDF,A.521), and published in For the Imperial Court: Qing Porcelain from the Percival David Foundation of Chinese Art, New York, 1997, fig. 8; one in the collection of the National Palace Museum, Taipei, exhibited and published in Catalogue of a Special Exhibition of Ch’ing Dynasty Monochrome Porcelains in the National Palace Museum, National Palace Museum, Taipei, 1981, cat. no. 27; one in the collection of the Chang Foundation published in Zhongguo lidai taoqi xuanji [Selected Chinese Ceramics from Han to Qing Dynasties], Taipei, 1990, pl. 129; two in the Baur Collection, Geneva, most recently exhibited and published in Mille ans de Monochromes: Vaisselle Sacrée et Profane des Empereurs de Chine, Les Collections Baur et Zhuyeutang / A Millennium of Monochromes: From the Great Tang to the High Qing, the Baur and the Zhuyuetang Collections, Baur Foundation Museum of Far Eastern Art, Geneva, 2018, cat. nos 173a and 173b; one in the Tokyo National Museum, Tokyo (coll. no. TG-1074); and one from the Mrs. M. Constantinidi Collection sold in our London rooms, 8th July 1947, lot 21, and purchased by the Fitzwilliam Museum, Cambridge (acc. no. C.7-1947), where it remains today. Another dish of this type, but from the Joshua Collection, sold two years earlier in our London rooms, 20th July 1945, lot 76. More recently, two dishes of this type were sold at Christie's Hong Kong, 30th October 2001, lots 802 and 803; the former was sold again in the same rooms, 6th July 2003, lot 579.