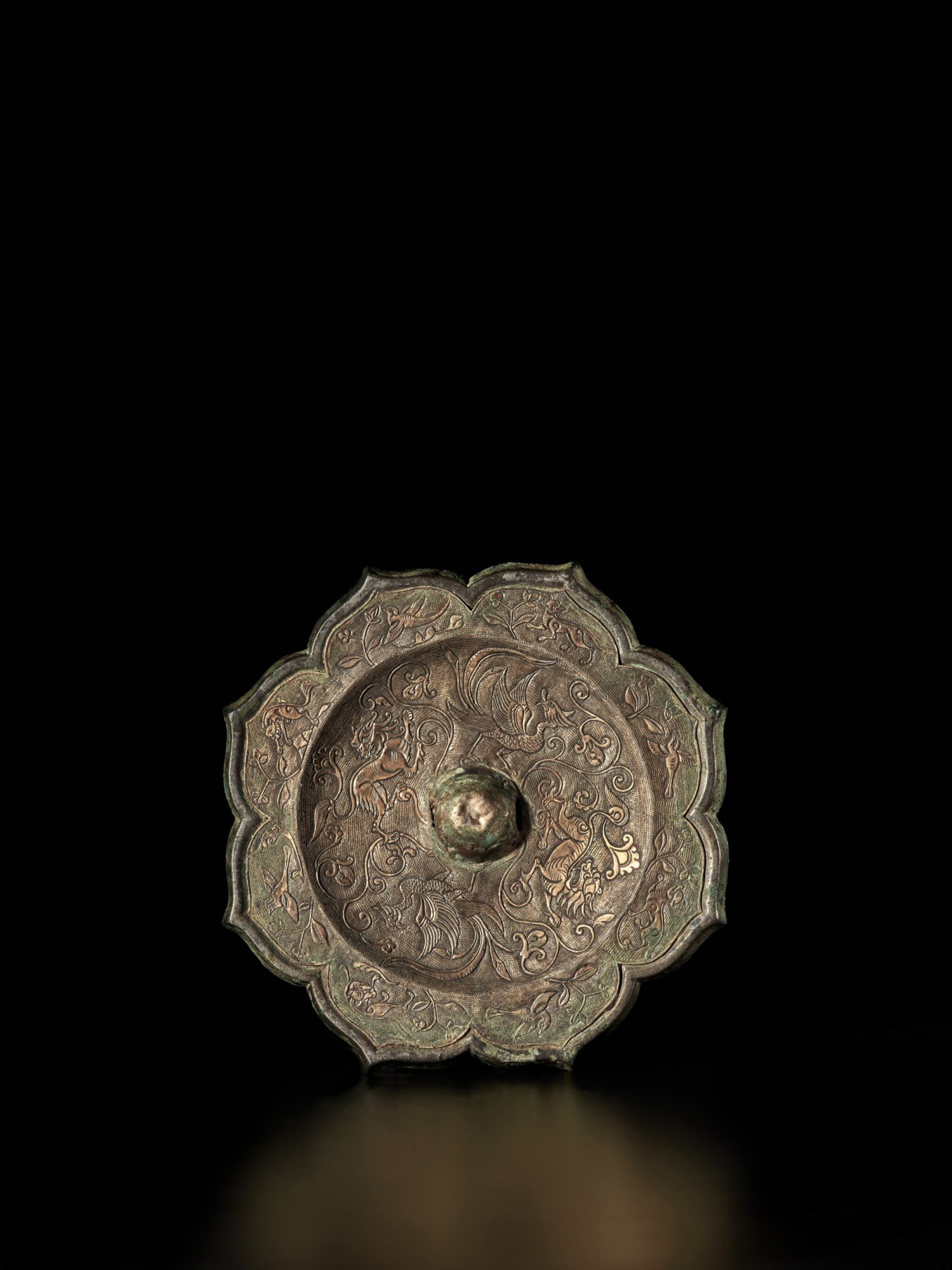 of floriform with eight petals, the silvered bronze inlaid to one side with a silver sheet with traces of gilt, finely chased with phoenix and mythical beasts encircled by a foliate scroll with birds and chilong, all against a ring-punched ground, centered by a pierced domed knop

Overall with expected surface wear and accretions, consistent with age and type.

Compare a slightly larger mirror of this type also decorated with mythical beast and bird motifs included in the exhibition Animals and Animal Designs in Chinese Art, Eskenazi, New York, 1998, cat. no. 17. See also a related example with six lions around the central knop, now in the Harvard Art Museums, Cambridge (acc. no. 1943.52.168), exhibited in Grenville L. Winthrop: Retrospective for a Collector, Fogg Art Museum, Cambridge, 1969, cat. no. 61, and inscribed with a date corresponding to 682-683 beneath the silver backing. A further gold-inset example from the same collection (acc. no. 1943.52.158) was included in ibid., cat. no. 62. Another related mirror was exhibited in Meikyo: Tokyo Orinpikku kinen [Clear Mirrors], The Gotoh Museum, Tokyo, 1964, cat. no. 59.

Additional comparable examples include a mirror in the collection of the Penn Museum, Philadelphia, illustrated in Shina-kodo Seikwa or Selected Relics of Ancient Chinese Bronzes from Collections in Europe and America, Part II Ancient Mirrors, vol. II, Osaka, 1933, pl. 128; one sold in these rooms, 23rd March 2004, lot 592; one published in The Complete Collection of Treasures of the Palace Museum: Bronze Articles for Daily Use, Hong Kong, 2006, pl. 168; one sold at Christie's New York, 4th June 1987, lot 17; and five smaller examples from the Eumorfopoulos Collection, now in the collections of Metropolitan Museum of Art, New York, and the R. A. Bidwell Collection, all illustrated in Shina-kodo Seikwa, op. cit., pl. 131.