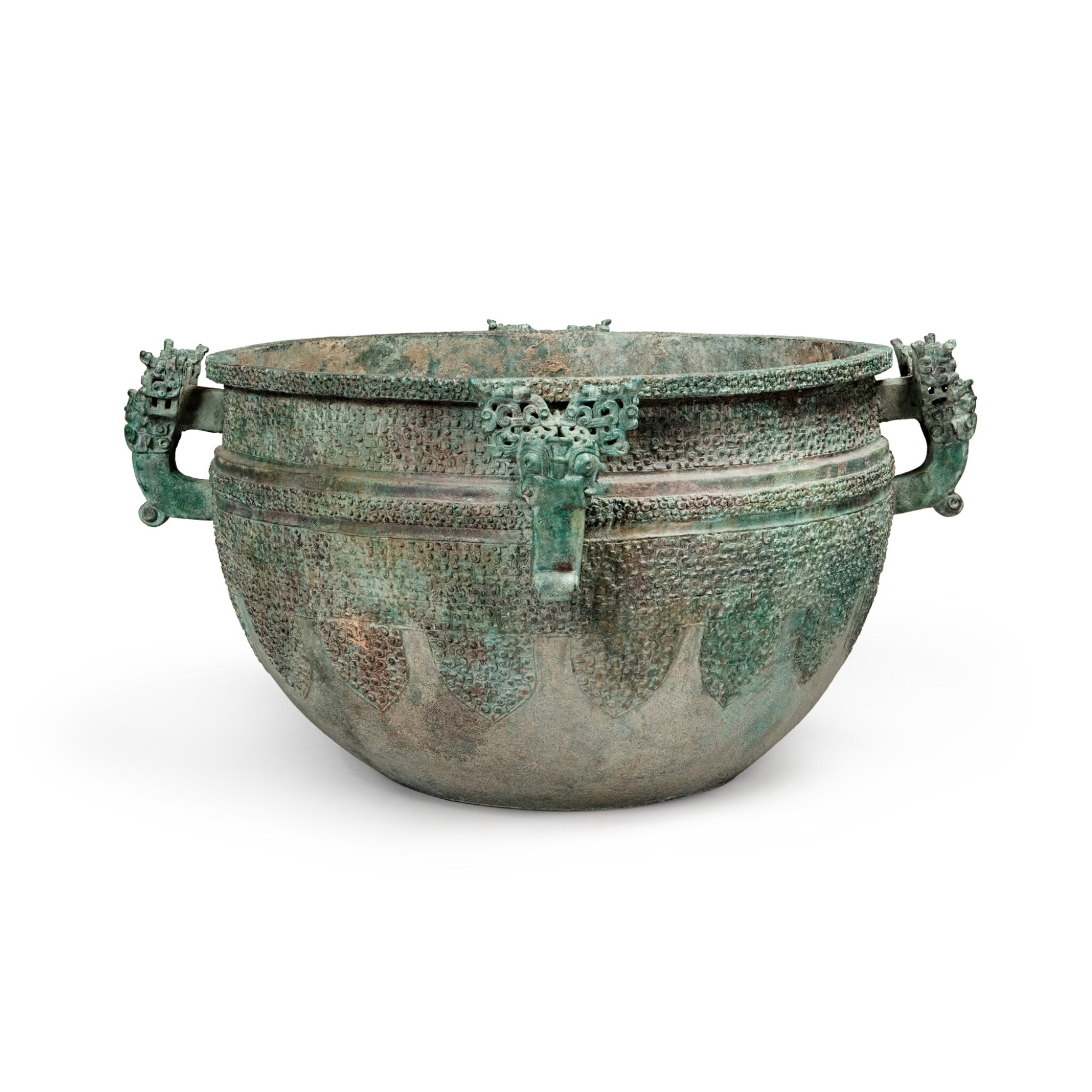 Eastern Zhou dynasty, late Spring and Autumn period, circa 500 BC

the deep sides rising to a slightly recessed neck beneath the everted rim, with four substantial D-shaped handles attached at the widest point of the body each ornamented with a sculptural beast mask sporting openwork antlers, below the handles a wide band suspending large pendent lappets all patterned with a dense network of comma-form curls, the commas with finely striated surfaces and emerging in high relief at either end, the same pattern repeated in the bands encircling the shoulder, neck, and rim, the patina mottled in green, reddish-beige, and gray oxidation

In general good condition. There are several restored cracks to the rim and body. The handles with some minor consolidation. Overall with some expected wear and minor losses to the extremities of the design, as can be expected.

The dense network of comma-shaped curls in undulating relief is characteristic of the 'Huai' decorative style around the turn of the early 5th century BC. This style is named for the region around the ancient Wu State (modern Jiangsu and eastern Anhui provinces) along the eastern reaches of the Huai River, where it was produced. The style developed from 6th century and contemporaneous zoomorphic motifs prevalent in bronze, lacquer, and carved wood designs in the neighboring Chu State, in which the creatures' bodies are comprised of curls, volutes, and comma-like elements. In its mature expression, Chu curvilinear elements became so richly executed that they that they nearly obscured the anatomy of the discrete animals, and dissolved patterns of interwoven creatures into fields of swirling textures. A prime example of this Chu mode of ornamentation is found a bronze bell known as the 'Wangsun Yizhe yongzhong', dated by inscription to 550 BC, and now in the collection of the Asian Art Museum, San Francisco (obj. no. B60S552). By circa 500 BC, artisans in the Wu State had taken the abstraction a level further by subordinating the zoomorphic impulse and reducing the decorative unit to curls or commas alone, so that that the motif became entirely non-figural.

This highly abstract curling comma pattern fills the bands and lappets on the present jian and also decorates three nearly identical jian each bearing inscriptions citing Wu kings who ruled at the end of the Spring and Autumn period. The earliest of the group, known as the 'Wu Wang Guang jian', was commissioned by King Helu of Wu (formerly known as Prince Guang of Wu, r. 514-496) as part of the dowry for his daughter Shuji's marriage to Marquis Zhaohou of Cai (also known as Marquis Houshen of Cai, r. 519-491 BC), and is now in the collection of the Anhui Provincial Museum, Hefei. The other two jian both bear the names of King Helu's son and successor, King Fuchai of Wu (r. 495-473 BC): one is in the collection of the Shanghai Museum, Shanghai, and published in Chen Peifen, Xia Shang Zhou qingtongqi yanjiu: Dong Zhou pian, Shang [Study of Bronzes of the Xia, Shang and Zhou Dynasties: Eastern Zhou, vol. 1], Shanghai, 2004, no. 507; the other was formerly in the collection of Herr Hans Georg Oeder, and later in the Staatliche Museum, Ostasiatische Abteilung, Berlin, and now believed to be in the State Hermitage Museum, St. Petersburg, published in George W. Weber, The Ornaments of Late Chou Bronzes: A Method of Analysis, New Brunswick, 1973, p. 45, pl. 5. Of these three comparable jian, the present example is most similar to the one commissioned by King Helu, in that they both have the comma-patterned relief at the rim, have volutes at the lower ends of the handles, and have similarly shaped beast masks at the handles with openwork antlers. This strongly suggests that the present jian was also produced at or around the time of King Helu's reign.

For massive Spring and Autumn period bronze jian sold at auction, but with differences in the handles and the decorative bands, see a pair sold at Christie's London, 13th November 2001, lot 48; a pair sold in our London rooms, 14th November 2000, lot 10; and a single jian sold in these rooms, 21st September 2005, lot 158.