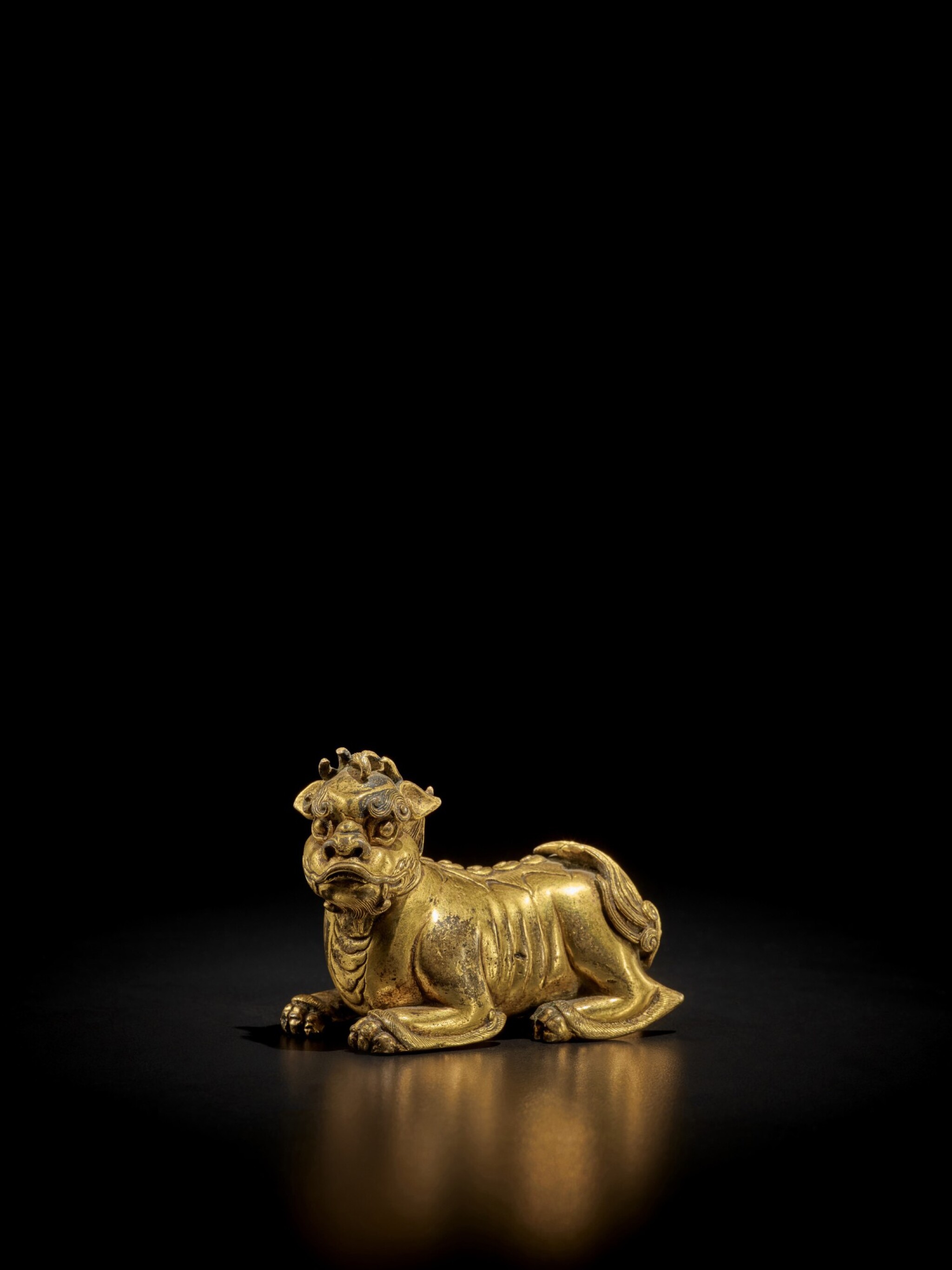 finely cast, the beast recumbent with head turned slightly to the left, the bulging eyes and broad nose above parted lip baring a row of teeth, the ribs indicated by a series of deep striations, tight coils of fur at the spine and terminating in a bushy tail swept to one side, each leg lined with a ridge of fur above the articulated paws

Some wear to the gilding especially around the edges. Some minor casting flaws, one to the belly. The tip of its right mane is bent and splitting is visible.

This gilt-bronze weight in the form of a mythical beast is exceptional for its superb workmanship and highly expressive nature. The animal is imposing and energetic, with an alert expression, sharp overhanging teeth and finely cast features.

Animal-form weights have been used since antiquity, with numerous examples surviving from the Han dynasty, and they continued to be essential for scholars in subsequent periods. The Guyu tu [Illustrated Compendium of Ancient Jades] notes that Zhao Mengfu once bought an ancient jade bixie for use as a paperweight, indicating that scholars would sometimes appropriate favorite antiquities to serve this utilitarian function. The Xuande period witnessed a renewed interest in bronze wares for the scholar's desk, including bronze animal-form weights such as the present lot. For a Xuande mark and period mythical beast-form weight from the Xiaogushan Guan Studio Collection, see Rochers de lettrés, Itinéraires de l'Art en Chine, Musée des Arts Asiatiques Guimet, Paris, 2012, cat. no. 58. Compare one example attributed to the Ming dynasty, sold in our London rooms, 24th February 1970, lot 13, and another sold at Christie's New York, 22nd March 2018, lot 1019. Two weights, one cast as a scaly mythical beast and another of leonine form, were included in the exhibition Arts from the Scholar’s Studio, Fung Ping Shan Museum, Hong Kong, 1986, cat. nos 194 and 195.

The rigid spine and dramatic quality of the present piece are characteristic of early Ming sculpture and recall the stone sculpture lining the spirit road of the Ming Tombs near Beijing, such as a qilin with similar pose and pronounced lips at the Valley of the Ming Tombs, Beijing, illustrated in Ann Paludan, The Chinese Spirit Road, New Haven, 1991, pl. 220.