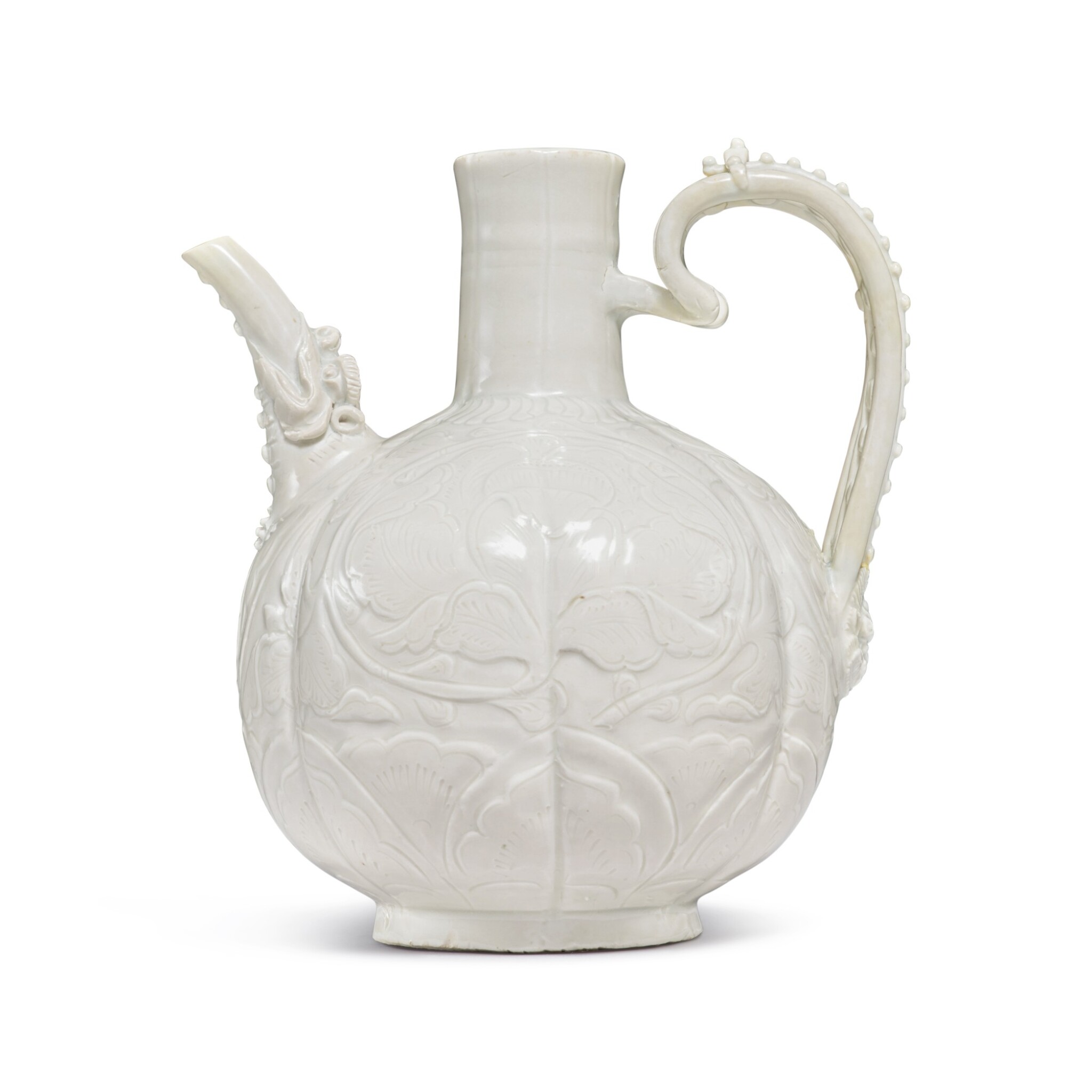 the hexalobed spherical body surmounted by a tall cylindrical, slightly waisted neck, one side applied with an openwork triple-strap loop handle with raised bosses terminating in a delicately molded beast-mask at the base, opposite a finely articulated dragon head with a curving elongated spout extending from its open mouth, a column of bosses on the underside of the spout, the body deftly carved with two lush peony blossoms on a meandering leafy scroll in relief, above petal lappets encircling the base, all under a translucent cool white glaze

Restoration to the tip of the spout as well as hairline cracks and small chips on the handle, with associated areas of overspray. A vertical glaze line at the shoulder approx. 4 cm long. A very minor flake to the foot wall approx. 0.4 cm across. There is a firing tear across the base, also visible in the interior.

The present ewer is an unusually fine and elaborate example from a small group of early white wares with carved designs. Its motifs are individually modeled and combine mythical and natural forms, with the latter informed by direct observation of native flora, contributing to the overall elegance of the design. An ewer of very similar proportions but with a much simpler handle (perhaps replaced) and slightly simpler design of the flowers is illustrated in Oscar Rücker-Embden, Chinesische Frühkeramik, Leipzig, 1922, col. pl. 24, with a line drawing of the carving, pl. 25, from the author's collection and later in the Staatliche Porzellansammlung, Dresden.

The petal design on the base of this vessel is also present on a white-glazed Xing ware bowl from the Tang dynasty, formerly in the Percival David Foundation Collection, and now in the British Museum, London (museum no. PDF.182). Due to the similarity between Xing and Ding wares, this bowl was previously believed to be a Ding ware of the Song dynasty, and only in recent years has it been identified a product of the earlier period and kiln site based its glaze and other properties. For another Ding ware carved with this motif, see a box with a similar petal design excavated in Quyang County, Baoding City, Hebei Province and exhibited and illustrated in Ding Ware, The World of White Elegance, Recent Archaeological Findings, Osaka, 2013, p. 121, pl. 14.