Property from an Important Collection 重要私人珍藏 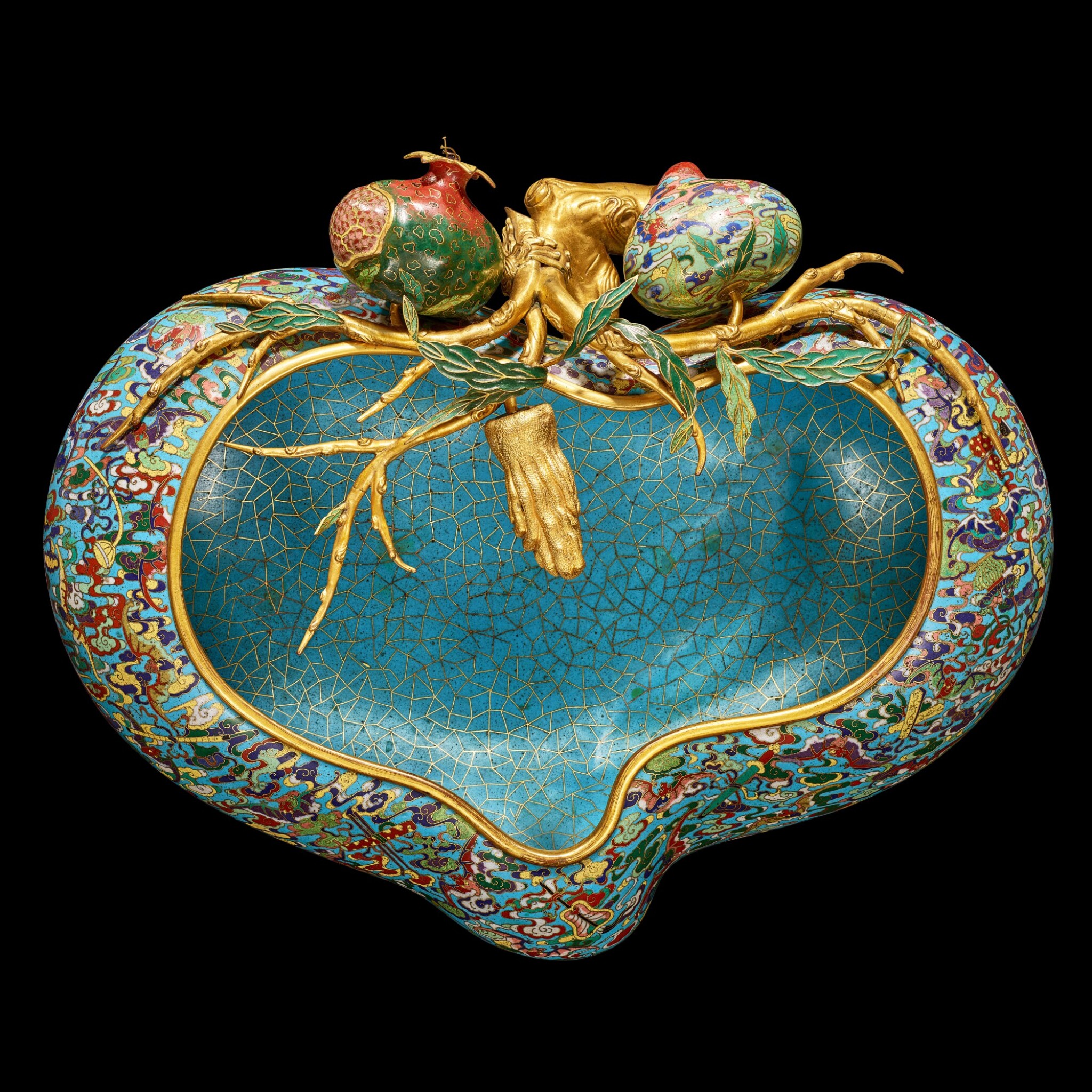 Property from an Important Collection 重要私人珍藏

superbly cast with a massive hollow body in the form of a peach borne on a leafy gilt branch issuing peach, pomegranate and finger citron, representing the 'Three Abundances', the exterior vibrantly decorated with the an baxian reserved on a dense multi-coloured ground of bats amid cloud scrolls, the interior with a classic ‘cracked ice’ design, all on a brilliant sky-blue turquoise ground

The basin is in good overall condition. There is a retouched bruise to one side measuring approx. 4 by 4 cm, and other minor areas of retouching. The gilt bronze has been regilded in small areas.

Superbly cast in the shape of a peach, this impressive and massively constructed basin is remarkable for its large size, colourful enamels and naturalistically cast handle which takes the form of a gnarled branch. The intricacy of the detailed articulation of the an baxian emblems against the cloud scrolls is unparalleled on other Imeprial cloisonné enamels wares created for the palace in the Qianlong period. Cloisonné vessels in the form of peaches are unusual and only a few examples are known; one with a slightly incurved rim was included in the exhibition Colourful, Elegant and Exquisite: A Special Exhibition of Imperial Enamel Ware from Mr Robert Chang’s Collection, Suzhou Museum, Suzhou, 2007, cat. no. 122; another from the collections of Sir John Buchanan-Jardine and T.B. Kitson, included in the International Exhibition of Chinese Art, Royal Academy of Arts, London, 1935-1936, cat. no. 2019, was sold in our London rooms, 18th October 1960; and a third was sold in our London rooms, 7th November 2007, lot 439.

It was during the reign of the Qianlong Emperor that the production of cloisonné enamel wares reached new heights. The technical mastery characteristic of Qianlong's reign and the significant increase in the number of palette used, which included more than twenty opaque colours, made it possible to manufacture pieces with elegantly crafted bodies and thick layers of enamel that made them solid and heavy. As Béatrice Quette mentions, 'all manner of forms were produced in unprecedentedly large sizes, especially in the case of imperial commissions'; see Quette, 'Cloisonné Form and decoration from the Yuan through the Qing dynasty', Cloisonné. Chinese Enamels from the Yuan, Ming and Qing Dynasties, New York, 2011, p. 56.