Property from the collection of Quincy Chuang 莊貴侖珍藏 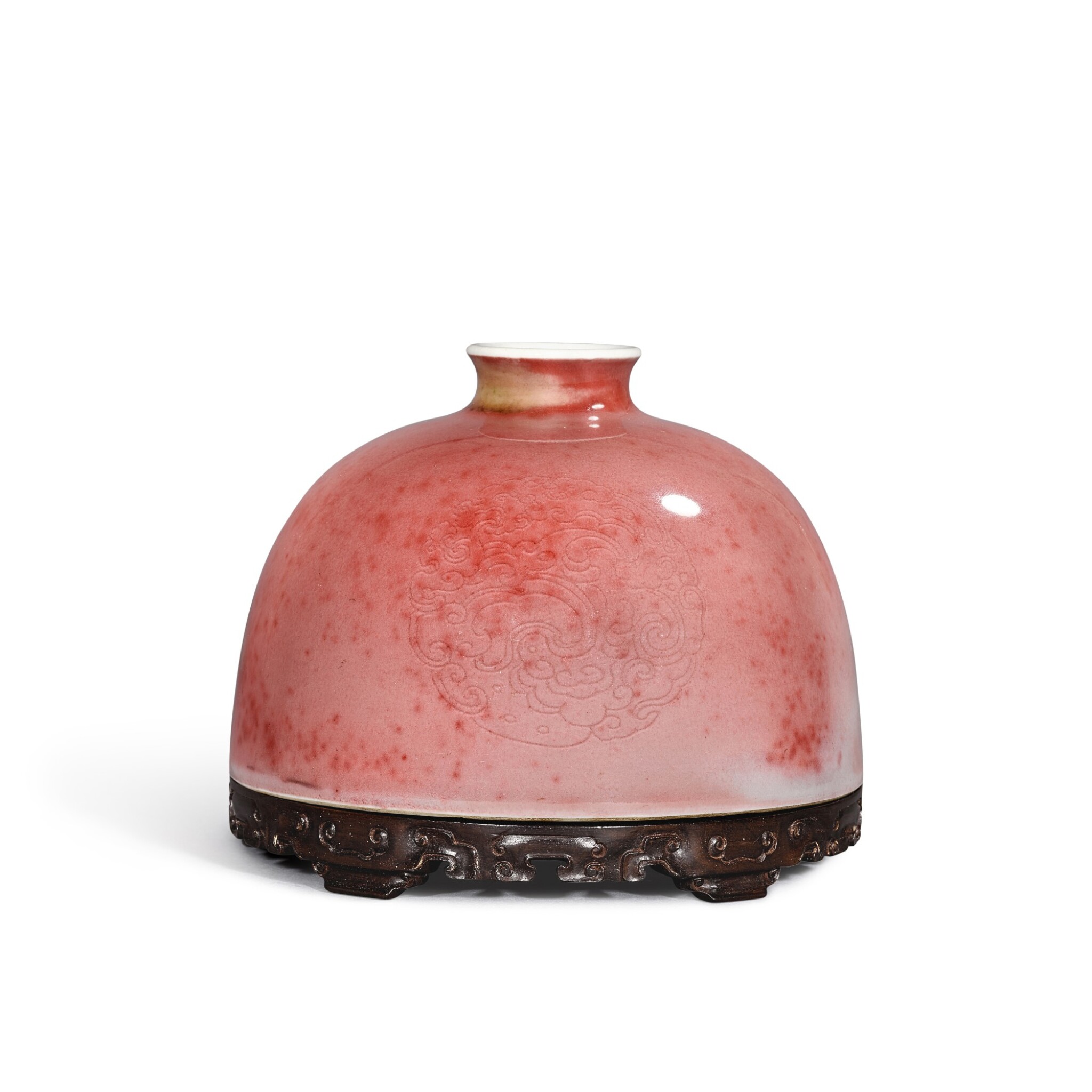 Property from the collection of Quincy Chuang 莊貴侖珍藏

Property from the collection of Quincy Chuang

Mark and period of Kangxi

with slightly tapering sides rising to a rounded shoulder and short waisted neck below a lipped mouthrim, subtly incised around the exterior with three stylised archaistic dragon medallions, all beneath an attractive pink glaze characteristically suffused with greenish-beige spots imitating the skin of a ripening peach, the recessed base and interior left white, the base inscribed in underglaze blue with a six-character reign mark in three vertical lines, wood stand

The waterpot is in good condition. There are some insignificant kiln flakes to the footring.

Notoriously difficult to achieve due to the temperamental nature of the copper pigment, the attractive 'peachbloom' glaze is only found on a small group of vessels for the scholar's table in eight different shapes, one of the most iconic groups of porcelain created under the Kangxi Emperor.

Copper-red glazes had been largely abandoned at Jingdezhen since the early Ming dynasty and were revived and drastically improved only during the Kangxi reign. Recent research by Peter Lam and other leading scholars indicates that the famous 'peachbloom' group was produced during the early years of the Kangxi period under the supervision of the skilled Zang Yingxuan, who was sent to Jingdezhen in 1681 to oversee the rebuilding of the kilns and serve as imperial supervisor. To manage the fugitive copper-lime pigment, it is believed to have been sprayed via a long bamboo tube onto a layer of transparent glaze and then fixed with another layer, so as to be sandwiched between two layers of clear glaze.

A waterpot of this type in the Palace Museum, Beijing, is illustrated in Kangxi. Yongzheng. Qianlong. Qing Porcelain from the Palace Museum Collection, Hong Kong, 1989, p. 142, pl. 125; one in the Shanghai Museum, Shanghai, is published in Wang Qingzheng, ed., Kangxi Porcelain Wares from the Shanghai Museum Collection, Hong Kong, 1998, pl. 206; another from the Sir Percival David Collection, now in the British Museum, London, is published in Margaret Medley, Ming and Qing Monochrome Wares in the Percival David Foundation of Chinese Art, London, 1989, pl. 580; and a further example of slightly smaller size, in the Metropolitan Museum of Art, New York, is illustrated in Suzanne G. Valenstein, A Handbook of Chinese Ceramics, New York, 1989, pl. 234.

These waterpots are known as taibai zun after the Tang dynasty poet Li Taibai, who is often depicted leaning against a large wine jar of similar form, as seen in a porcelain sculpture, which shows the poet seated with eyes closed and a cup in hand, published in Kangxi. Yongzheng. Qianlong. Qing Porcelain from the Palace Museum Collection, op. cit., p. 106, pl. 89. They are also referred to as jizhao zun, because their shape resembles that of a chicken coop.