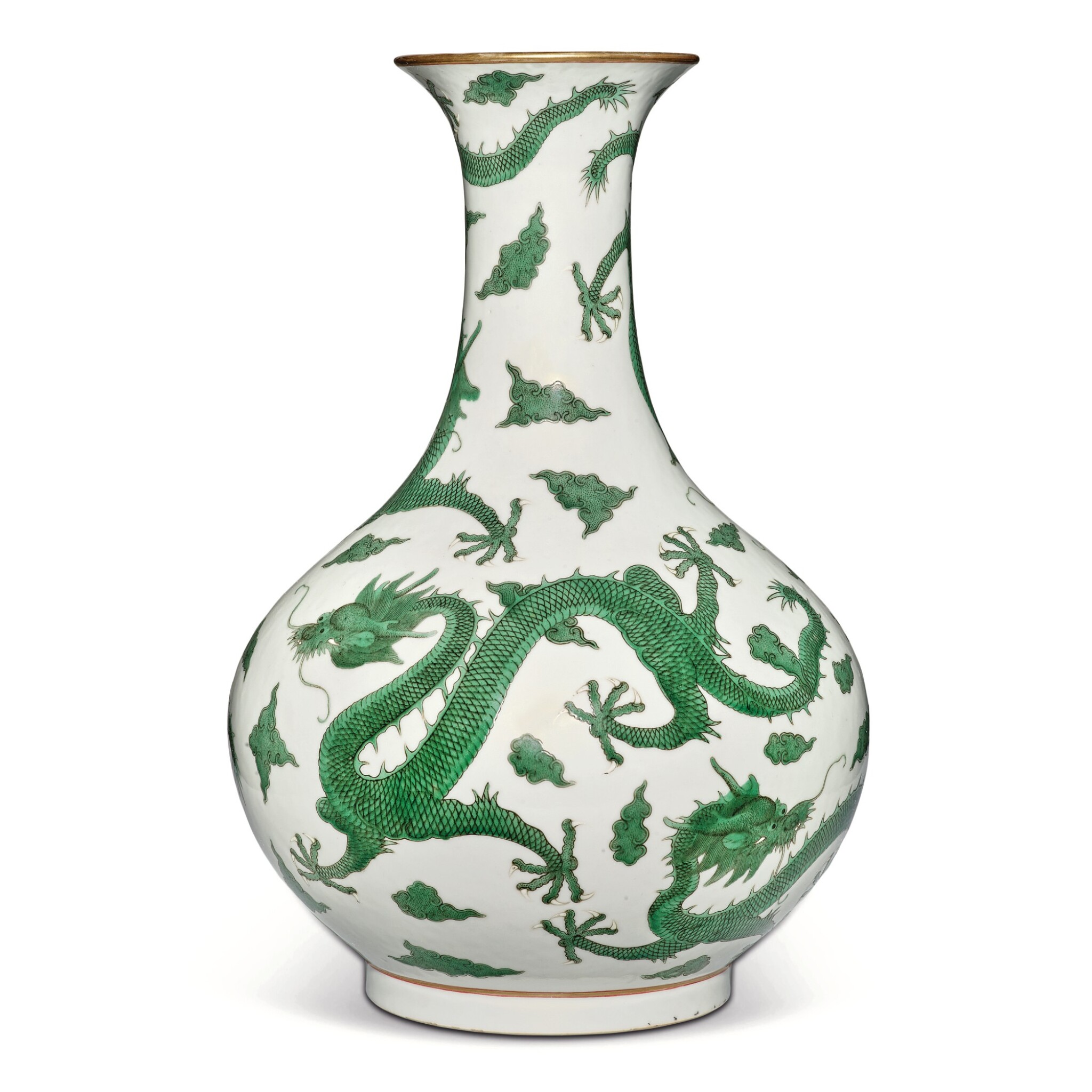 finely potted with the slightly compressed globular body rising from a short, straight foot to a tall cylindrical neck flaring at the rim, decorated around the exterior with five scaly dragons each in different postures among cloud wisps in pursuit of a 'Flaming Pearl', the interior of the mouth and base enameled in turquoise, the latter centered with an iron-red six-character seal mark reserved in a white square

In overall good condition with some expected light wear and minor firing imperfections, including a few very small discolored patches to the foot ring.

Because this lot was imported into the United States after September 1, 2020, it is subject to an import tariff of 7.5% of the value declared upon entry into the United States. $9,375, plus applicable sales tax will be included on your invoice unless you instruct Sotheby's to arrange shipping of the lot to a foreign address. For more information on the import tariff, please review the Symbol Key in the back of the catalogue. If you have any questions, please contact tariffs@sothebys.com.

﻿For more information on and additional videos for this lot, please contact Randi.Yiu@sothebys.com.

This elegantly shaped vase with its green-enameled dragon motif represents a particularly rare example of Daoguang period (1821-1850) imperial porcelain bearing this motif. The pattern was first created during the Chenghua period (1465-1487) and remained popular throughout the Ming (1368-1644) and Qing (1644-1911) dynasties. Ming dynasty ceramicists typically incised the dragons on the reserved biscuit clay before enameling the animals in green; Qing ceramicists, on the other hand, painted the enameled dragons on top of a layer of transparent glaze. Among the various types of ‘green dragon’ wares produced over the centuries, such as jars, bowls and dishes, there is only one other vase known to exist, which also bears a Daoguang seal mark and is of the period. That vase, formerly in the Yiqingge Collection, is identical to the present example, and was sold at Christie’s Hong Kong, 29th May 2013, lot 2028. Another closely related Daoguang vase of the same form and design, but painted in black enamel, in the collection of the Seikadō Bunko Art Museum, Tokyo, was included in the exhibition Seikadō zō Shinchō tōji. Keitokuchin kanyō no bi [Qing dynasty porcelain collected in the Seikado. Beauty of Jingdezhen imperial kilns], Tokyo, 2006, cat. no. 75.

From the Kangxi period (1662-1722) onwards, green-enameled dragons chasing 'Flaming Pearls’, painted with underglaze-blue outlines and black details, can be found on covered jars; a Daoguang mark and period example is preserved in the National Palace Museum, Taipei (accession no. 故-瓷-008825).

Another jar of this type and period, exhibited in the Roemer Museum, Hildesheim, Germany, in 1899, sold in these rooms, 21st March 2018, lot 549; and a pair of such jars sold in the same rooms, 18th September 2007, lot 283. For a Kangxi precedent of this design see a jar in the Palace Museum, Beijing, illustrated in Wang Liying, ed., Gugong Bowuyuan cang wenwu zhenpin quanji. Wucai, doucai / The Complete Collection of Treasures of the Palace Museum. Porcelains in Polychrome and Contrasting Colours, Hong Kong, 1999, pl. 190.