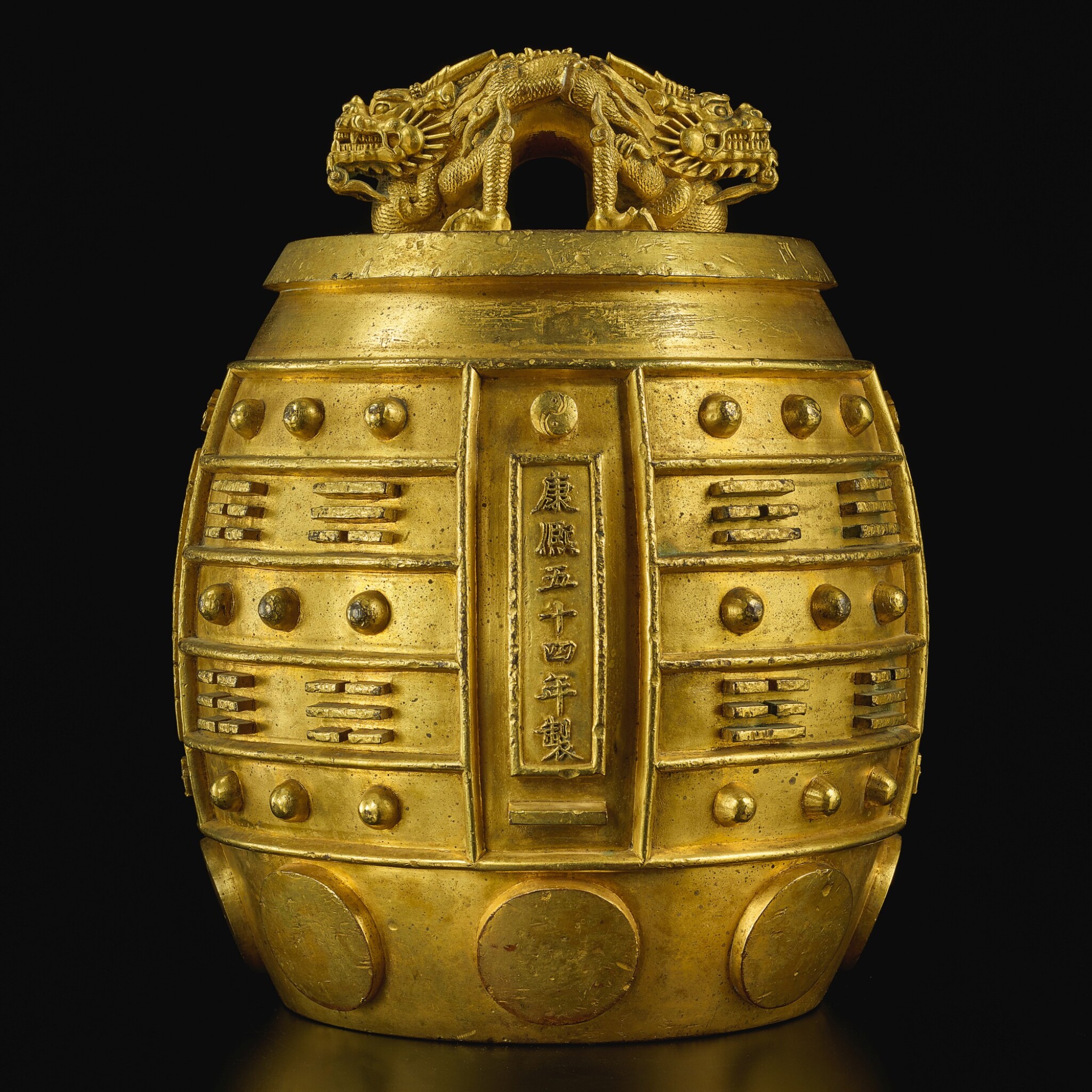 Kangxi mark and period, dated to the 54th year, corresponding to 1715

the large bell finely cast, suspended from a double-headed dragon handle, each beast powerfully rendered with eyes bulging and nostrils flaring above long curling whiskers, the mouth open to reveal its tongue thrust between sharp fangs, with two long studded horns extending back over its head along a combed mane with finely incised details, the two scaly bodies intertwined and crouching in ambush, the large barrel-shaped body of the bell with four panels of alternating bosses and trigrams, divided by two rectangular panels, one inscribed with the characters Kangxi wushisi nian zhi (made in the fifty-fourth year of Kangxi), and the other with huangzhong, denoting its musical pitch

Bianzhong were produced for the court during the Qing dynasty as an essential component of Confucian ritual ceremonies at the imperial altars, formal banquets and processions. The music produced by these instruments was believed to facilitate communication between humans and deities. Gilt-bronze bells of this type were assembled in sets of sixteen and produced twelve musical tones, with four tones repeated in a higher or lower octave. These sets were further divided into yin or yang, indicated by a solid horizontal line or broken line under the panel of inscriptions to represent a minor or major key respectively. The present bell generates the most important and first tone, huangzhong, from the set. The huangzhong tone was considered the founding principle of music, and was the note played at the beginning and end of each ritual. Cast in equal size but varying in thickness, these bells were attached to tall wooden frames in two rows of eight as depicted by Giuseppe Castiglione (1688-1766) in his painting Imperial Banquet in Wanshu Garden (ca. 1755), included in the exhibition Splendors of China's Forbidden City. The Glorious Reign of Emperor Qianlong, The Field Museum, Chicago, cat. no. 101.

Imperial gilt-bronze bianzhong were also produced with a design of dragons in high relief. Two examples of the huangzhong tone are known; the first, in the Palace Museum, Beijing, is illustrated in Zhongguo meishu quanji gongyi meishu bian [Complete Series on Chinese Art], vol. 10, Beijing, 1987, pl. 176; the second, formerly in the collection of Robert de Semallé (1849-1936), was sold at the Hôtel Drouot by Tessier & Sarrou, 16th December 2019, lot 23.

The dragons surmounting this bell are known as pulao, which according to ancient Chinese legend is one of the nine sons of the dragon. The myth alleges that Pulao resided close to the shore while his arch enemy, the whale, lived in the ocean. Whenever the whale would come to attack, Pulao would sound a roar. The structure of a bell is thus associated with this legend; the clash of the bell, Pulao, with the striker, the whale, would result in the dragon producing its loud ringing roar.