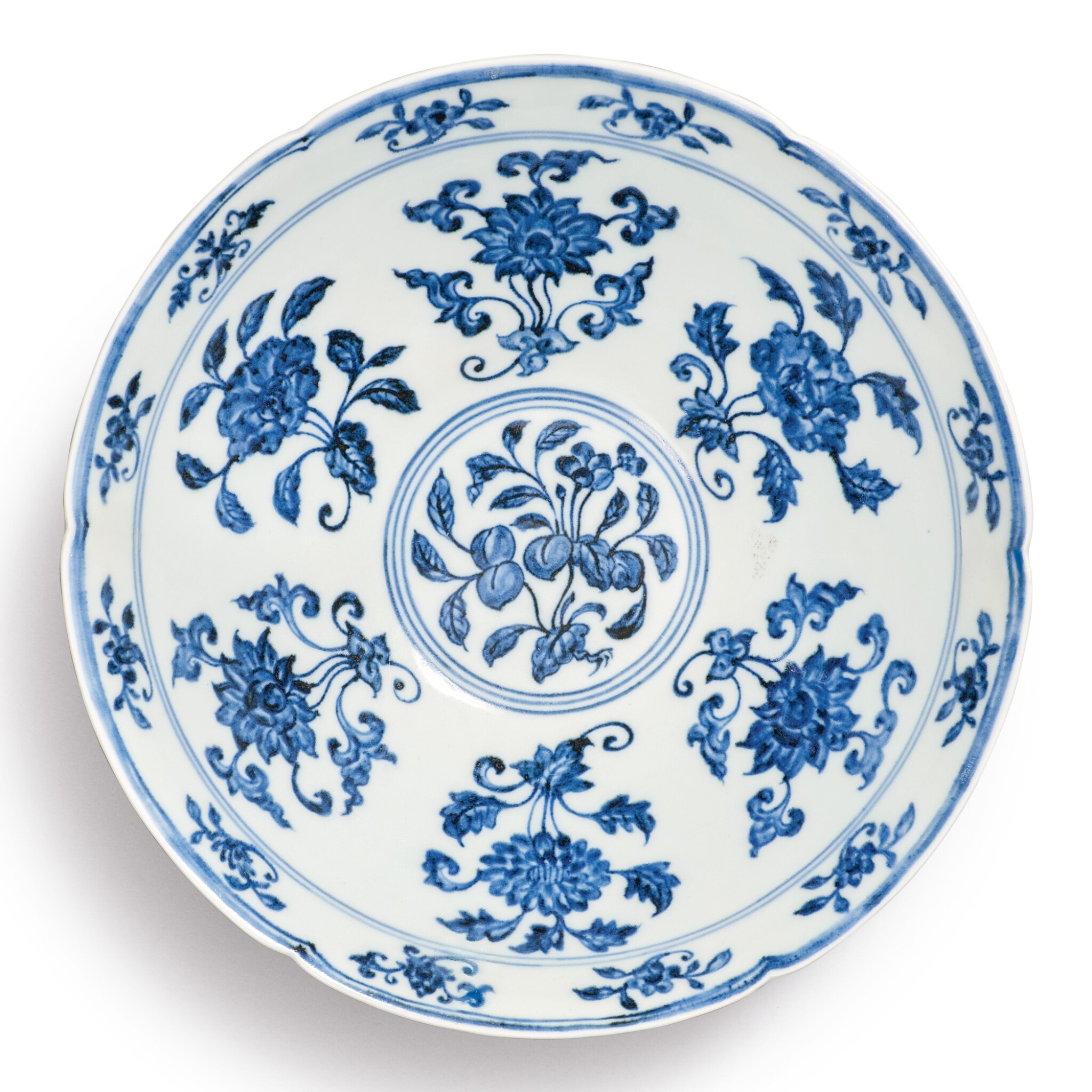 of conical form, well potted with the flaring sides rising from a slightly tapered foot to a six-lobed rim, finely painted in deep cobalt blue accentuated with characteristic 'heaping and piling', the interior centered with a medallion enclosing a flowering and fruiting peach branch, surrounded by three sprigs of lotus flowers alternating with sprays of tree peony, chrysanthemum, and herbaceous peony, all beneath a row of small floral sprigs at the rim, the exterior with six fruit sprays comprising peach, cherry, loquat, pomegranate, grape, and lychee, alternating with six small floral sprays below including camellia, chrysanthemum, lotus, rose, and peony, the foot encircled with a band of classic scroll, the base inscribed with a six-character reign mark, the cavetto with a later incised character reading yi (righteousness)

Because this lot was imported into the United States after September 1, 2020, it is subject to an import tariff of 7.5% of the value declared upon entry into the United States. $18,750, plus applicable sales tax will be included on your invoice unless you instruct Sotheby's to arrange shipping of the lot to a foreign address. For more information on the import tariff, please review the Symbol Key in the back of the catalogue. If you have any questions, please contact tariffs@sothebys.com.

Collection of a Canadian diplomat, acquired in Southeast Asia between the 1950s and 1970s.

Fruit and flower sprays symbolizing prosperity were popular designs of the early Ming dynasty (1368-1644). Bowls of this lobed form appear to be specific to the Xuande reign (1426-1435) and became part of the classic repertoire of the official kilns. The shape is derived from conical bowls with six delicate rim lobes glazed in monochrome white, which had been produced at Jingdezhen during the Song dynasty (960-1279). Tailored to the imperial taste, products of the Xuande workshops were exquisitely finished and inscribed with the imperial reign mark. Bowls of this design continued to be admired throughout the Ming and Qing dynasties, as evidenced by later copies.

Closely related examples are well represented in museum collections around the world, for instance, two bowls preserved in the National Palace Museum, Taipei, included in the Museum’s exhibitions Ming Xuande ciqi tezhan mulu/Catalogue of a Special Exhibition of Hsuan-te Period Porcelain, Taipei, 1980, cat. no. 36, and Mingdai Xuande guanyao jinghua tezhan tulu/Catalogue of the Special Exhibition of Selected Hsüan-te Imperial Porcelains of the Ming Dynasty, Taipei, 1998, cat. no. 62; and one from the Qing Court Collection, now in the Palace Museum, Beijing, illustrated in Geng Baochang, ed., Gugong Bowuyuan cang Ming chu qinghua ci/Early Ming blue-and-white porcelain in the Palace Museum, vol. 2, Beijing, 2002, pl. 146, where the author notes that this design was frequently copied in the Kangxi (1662-1722) and Yongzheng (1723-1735) periods, and where a Xuande-marked copy attributed to the Kangxi reign is illustrated, pl. 179.

Bowls of this type in private collections include one sold in our London rooms, 24th March 1964, lot 98, now in the collection of Asia Society, New York, and illustrated in Denise Patry Leidy, Treasures of Asian Art: The Asia Society’s Mr. and Mrs. John D. Rockefeller 3rd Collection, New York, 1994, pl. 176; one formerly in the collections of President Herbert Hoover, and Ira and Nancy Koger, sold in our these rooms, 27th November 1990, lot 6; and another one illustrated in Regina Krahl, Chinese Ceramics from the Meiyintang Collection, vol. 2, London, 1994-2010, no. 671, formerly in the collections of K.L. Dawes, John F. Woodthorpe and Frederick M. Mayer, and sold in our Hong Kong rooms, 5th October 2011, lot 12; and most recently a bowl from an important American collection sold in these rooms, 15th March 2017, lot 7.