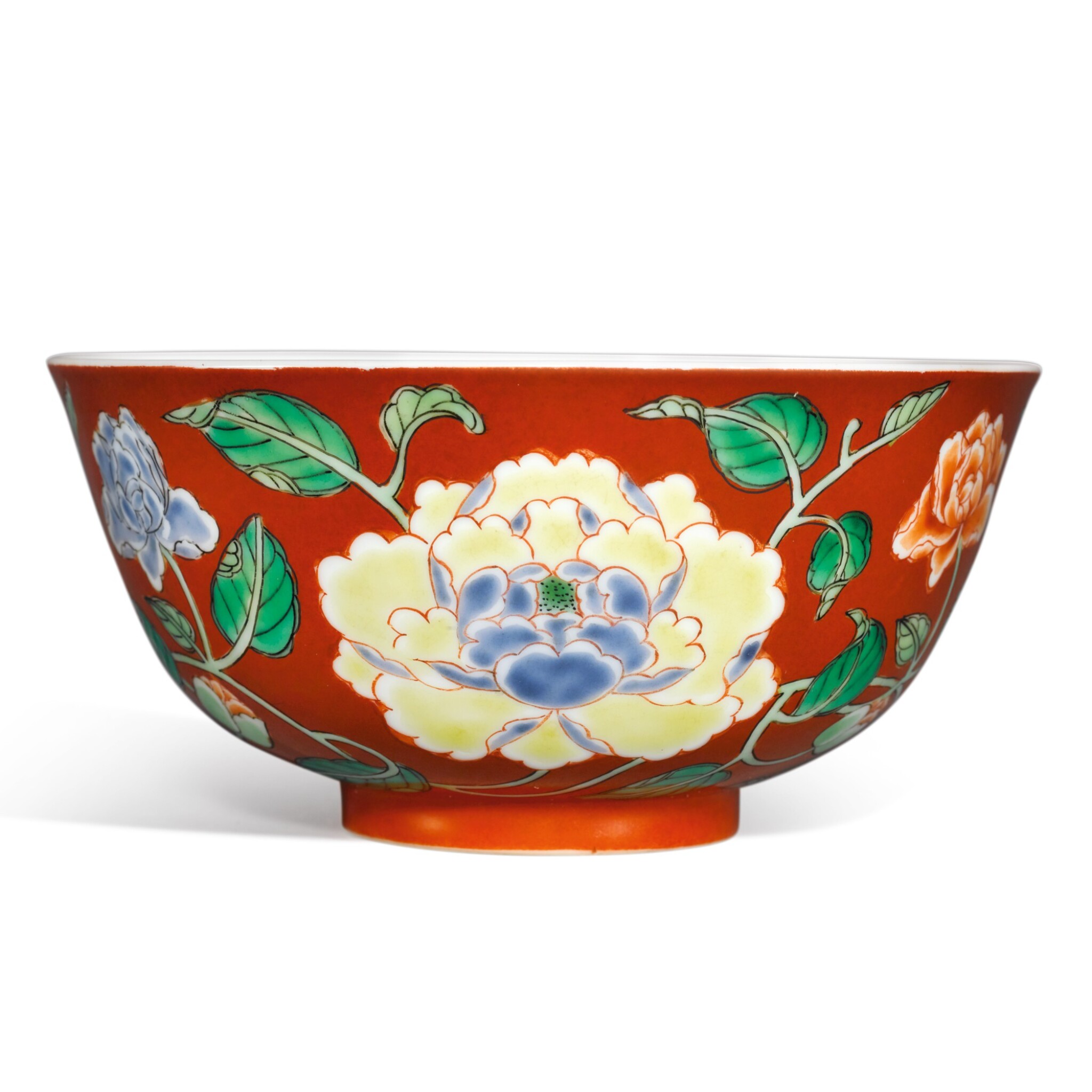 the deep rounded sides supported on a short foot rising to a slightly flared rim, the exterior decorated in a famille-verte palette with three large peony blooms, one with green and pale aubergine petals, the other two with yellow and blue petals, interspersed with three smaller blooms picked out in blue, yellow and coral-red, all borne on meandering leafy stems issuing floral buds on a rich coral-red ground, the base with a four-character yuzhi reign mark in underglaze blue within a double square

The bowl is overall in good condition, with just insignificant and expected firing imperfections including a small area of staining to the unenamelled section of the rim and minute pinholes.

Because this lot was imported into the United States after September 1, 2020, it is subject to an import tariff of 7.5% of the value declared upon entry into the United States. $45,000, plus applicable sales tax will be included on your invoice unless you instruct Sotheby's to arrange shipping of the lot to a foreign address. For more information on the import tariff, please review the Symbol Key in the back of the catalogue. If you have any questions, please contact tariffs@sothebys.com.

From the Kangxi period, dark-colored grounds adorned with vibrant polychrome floral designs were favored for their dramatic demonstration of the newly developed falangcai enamels at the Palace Workshops in Beijing. The form and colors of this bowl are typical of the porcelain produced in the early Yongzheng period at the imperial kilns in Jingdezhen and continue in the style pioneered by craftsmen of the Kangxi period in imitation of those produced at Beijing. Such bowls were made for the use of the Yongzheng Emperor, as indicated by the Yongzheng yuzhi mark.

Bowls of this form and decoration are rare; see two closely related examples, in the National Palace Museum, Taipei, included in the Museum’s exhibition Porcelain with Painted Enamels of Qing Yongzheng period (1723-1735), 2013, cat. no. 020. The color scheme and design of this piece is related to Yongzheng yuzhi marked bowls of shallower form, see two of shallower form with related design and color scheme, ibid., cat. nos 18 and 19. Two additional shallow bowls, in the Chang Foundation, are published in Selected Ceramics from Han to Qing Dynasties, Taipei, 1990, pl. 142. Compare also a slightly larger bowl with straight sides, but with a Yongzheng nianzhi mark, from the collection of Sir Alfred Beit, sold in our London rooms, 6th November 2013, lot 75.

The form of this bowl, with its slightly flared rim, is more often found decorated with a myriad of flowering blooms and leaves on a coral ground; see one illustrated in Hugh Moss, By Imperial Command. An Introduction to Ch’ing Imperial Painted Enamels, Hong Kong, 1976, pl. 5, where he attributes it to the Jingdezhen imperial kilns between 1722 and 1728; and another sold in our Hong Kong rooms, 8th April 2010, lot 1803.

Reign marks with the wording yuzhi [made for the imperial use of…] following the reign name, rather than nianzhi [made in the years of…] are rare and suggest a closer relationship to the imperial court. Wares enameled in the imperial workshops in the Forbidden City of Beijing rather than by the imperial kilns at Jingdezhen in Jiangxi bear such yuzhi marks, but in overglaze blue or pink enamel, since the plain white porcelains came from Jingdezhen fully glazed and fired. The significance of the underglaze-blue yuzhi mark, which would have been added at Jingdezhen, has been much discussed, particularly since identical bowls are also known with underglaze-blue nianzhi marks. It has been suggested that such bowls were enameled in the Palace at Beijing, with only the mark inscribed at Jingdezhen before firing. However, it is likely that they were decorated in Jingdezhen as the style of enameling differs from that decorated with blue and pink enamels. Hugh Moss, op. cit., p. 82, suggests that such bowls bearing the famille-verte palette were probably produced in Jingdezhen following porcelains painted in the Palace Workshops in Beijing. Until the craftsmen in Beijing became acquainted with the developments in famille-rose of the Palace Workshops they continued to work in the dominant style of the Kangxi period.