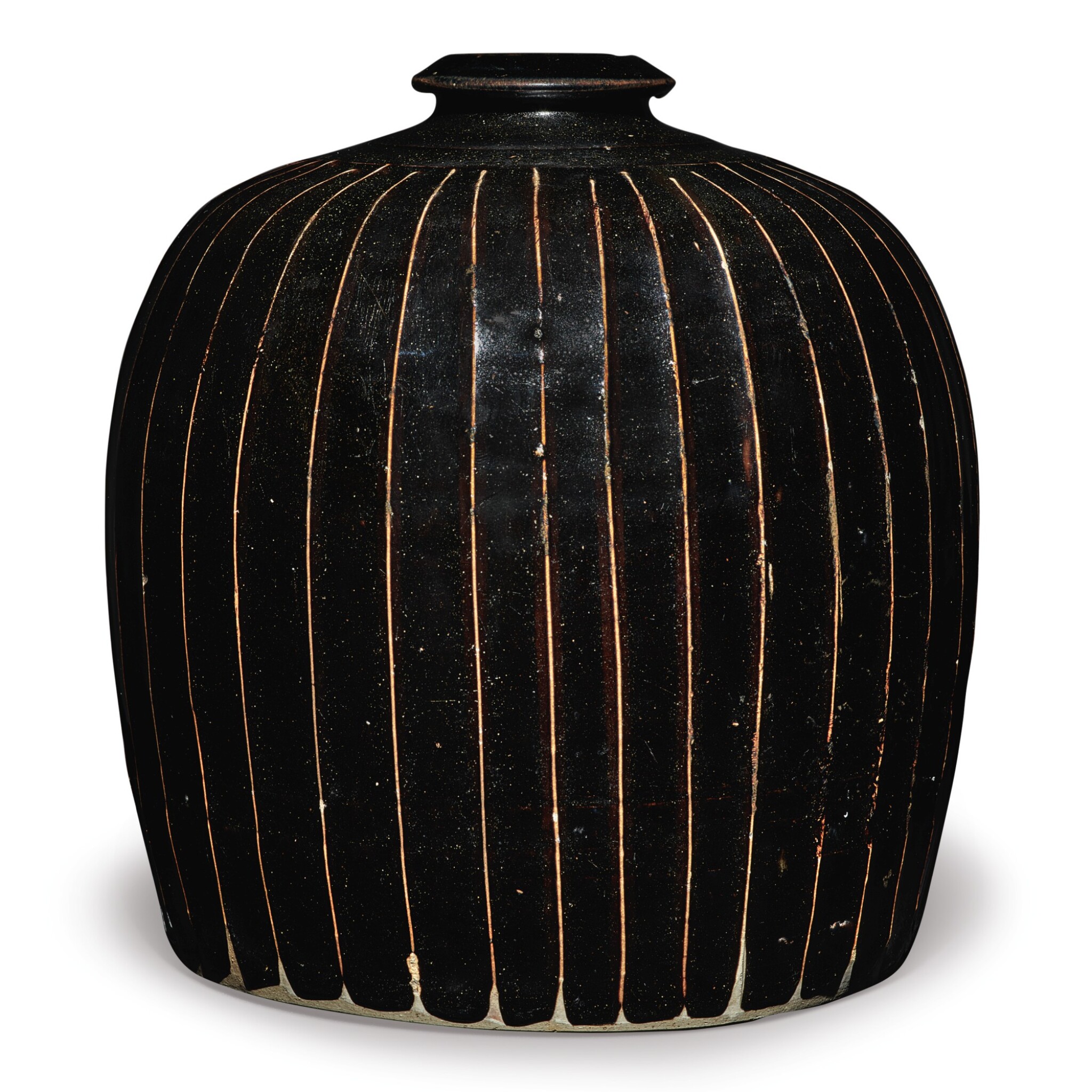 the domed body rising to a narrow waisted neck and lipped rim, applied to a narrow and waisted neck to a lipped rim, the body applied with a row of white vertical ribs, covered overall with a lustrous black glaze stopping neatly at the foot, the countersunk base unglazed revealing the grayish stoneware body

The exterior body over-sprayed, presumably concealing restoration, stopping at the mouth rim, with possible repair to the neck.

Because this lot was imported into the United States after September 1, 2020, it is subject to an import tariff of 7.5% of the value declared upon entry into the United States. $18,750, plus applicable sales tax will be included on your invoice unless you instruct Sotheby's to arrange shipping of the lot to a foreign address. For more information on the import tariff, please review the Symbol Key in the back of the catalogue. If you have any questions, please contact tariffs@sothebys.com.

The present vase is one of the finest examples of black wares with ribbed decoration. The seemingly easy, yet highly effective method of decorating a black jar with parallel white lines was adopted by many northern kilns during the Song dynasty (960-1279). Qualities, shapes and details of the execution, however, vary considerably. Extant dark vessels with bright lines are mostly adorned in a relatively spontaneous manner. It is extremely rare to find an example with a finish as refined as that on present piece. The fine and straight white ribs, running in parallel all the way from the top to the bottom, point to the skillful control craftsmen were able to exert over the medium at the time.

However popular vessels of this design were, they usually came in the form of wide-mouthed jars with or without handles; pieces of the present form are extremely rare. This impressive shape, with small mouth, broad shoulders and wide base, is known as tuluping, or truncated meiping, and was used for storing wine. Usually consumed at a warm temperature, alcohol would have been transferred to a ewer or smaller bottle for pouring into the cup.

White-ribbed dark wares were mostly produced in the twelfth and thirteenth centuries, at numerous kilns in Henan, Hebei, and Shandong provinces. Robert D. Mowry discusses this type of ware in detail in the catalogue to the exhibition Hare’s Fur, Tortoiseshell, and Partridge Feathers: Chinese Brown-and Black-Glazed Ceramics, 400-1400, Harvard University Art Museum, Cambridge, 1996. He suggests that ribs of white slip were first decoratively used during the Tang dynasty (618-907), on ceramics imitating lacquer or silver, mainly to segment the interiors of open-form vessels (p. 176). In the tenth and eleventh centuries they were sparingly added to the exteriors of vessels, before emerging as an important decorative scheme in their own right by the twelfth century. Although the kilns were mainly located in north China, the still very limited evidence from the various sites does not yet permit conclusive attribution of individual pieces to any particular kiln group.