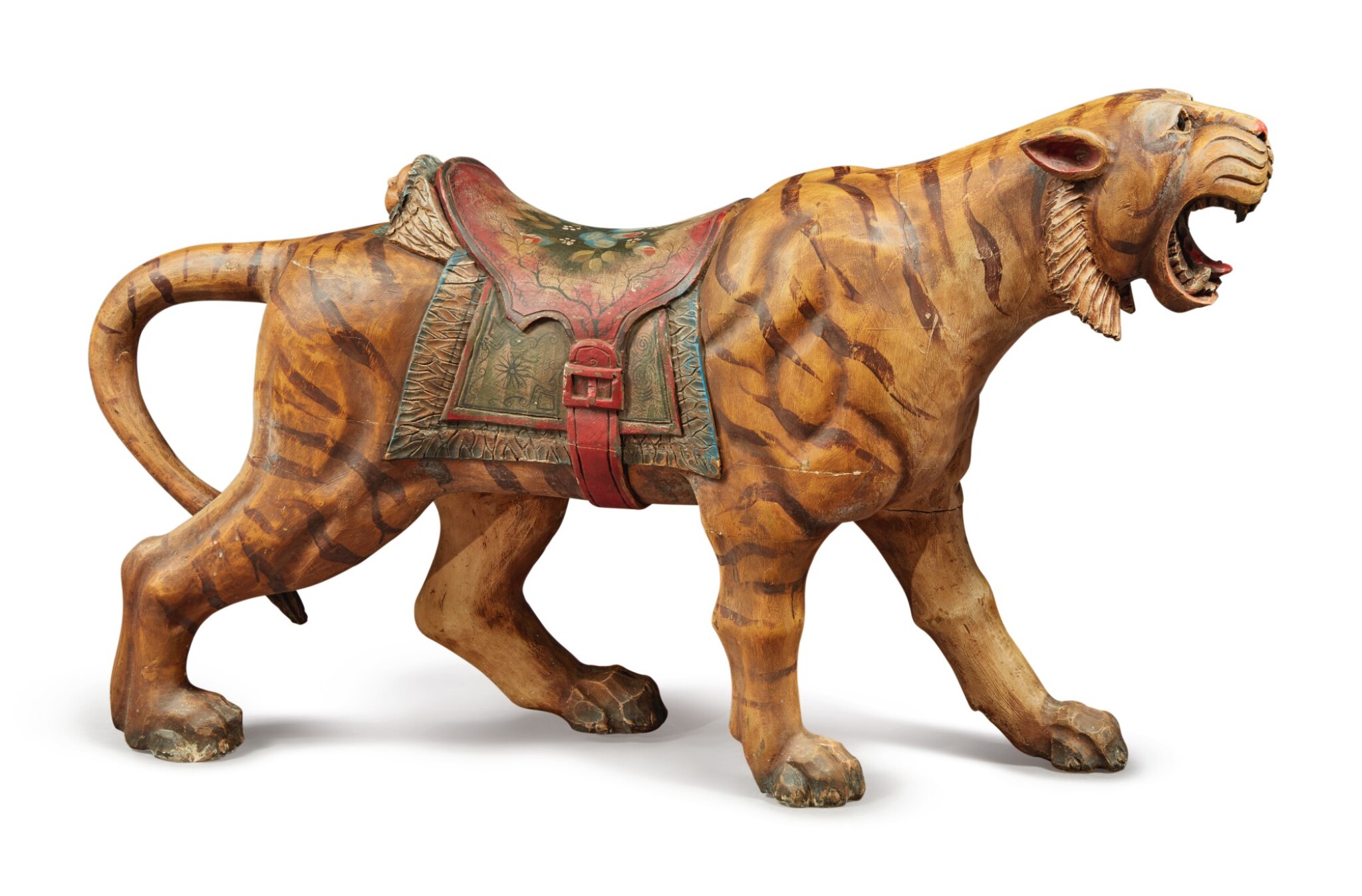 Repainted. Glass eyes look original. Scattered cracks due to shrinkage. Shrinkage crack from the proper left eye to the junction of the body, approximately 12 ½ in. long.

"What goes around comes around." The old adage has never rang more true than in the context of the carousel animal as a cultural artifact. An early nineteenth century amusement park mainstay synonymous with childhood merriment, carousel animals serve as vestiges of a bygone era before the handicraft of man was supplanted by the infatuation with the machine.

German immigrant, Gustav Dentzel’s creation of the first carousel in America in Philadelphia in the 1860s ignited the “Carousel Golden Age,” both in terms of craftsmanship and an expanding market benefitting from the turn-of-the-century commercialization of leisure activities. The Philadelphia Toboggan Company, founded in 1904, drew upon the “Philadelphia Style” Dentzel coined, which was characterized by the marriage of elegance with realism.1 The Philadelphia Toboggan Company’s models were highly sought after by parks nationwide for their ornate carvings, resplendent colors, and innovative combinations of horses and menagerie animals.

Despite some stylistic variations throughout the ninety four carousels the company created between 1904 and 1934, meticulous record keeping and identification of the carousel models by engraved numbers on the center poles contributes to the ability to attribute and date each animal with greater certitude than most other companies. Out of the ninety four carousels the Philadelphia Toboggan Company created, only six featured tigers.2 The rarity of the present example is further reinforced by its posture as a standing animal, which indicated that it occupied a prized position on the highly visible outer row of three or four rings of animals.

The anatomically accurate physique, highly delineated musculature, and curvature of the tail between the legs constitute three singularly Philadelphian characteristics. But the present example is unique in that the saddle and blanket across the animal’s back display an unparalleled ornate quality, far more detailed than comparable carousel animals of the period. Furthermore, the tiger is distinguished by its amiable disposition, as if he knows he should be roaring, but instead issues a deep belly lap to entice the next rider to jump aboard for a ride.