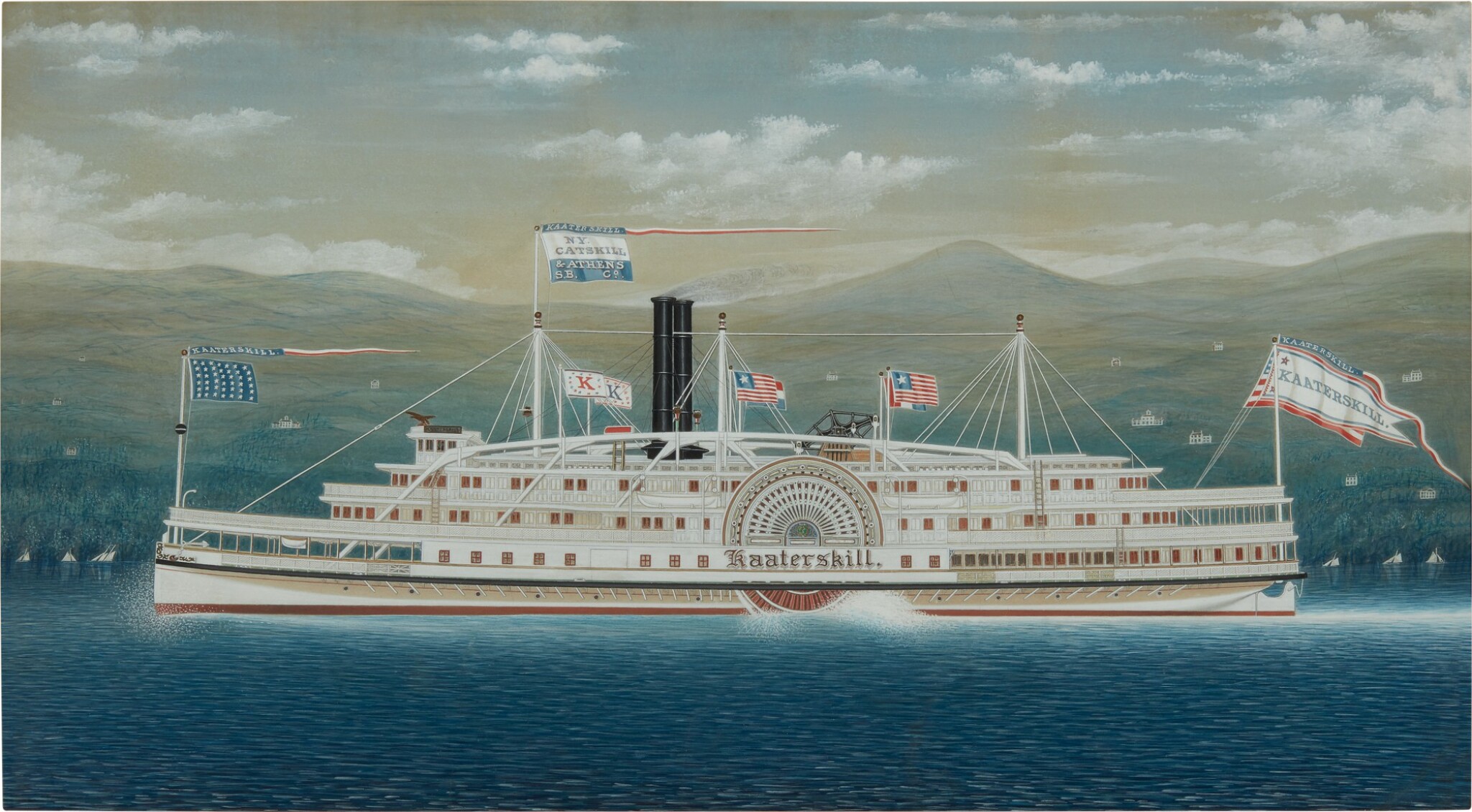 watercolor and gouache on paper

Very Good condition overall. Some minor scratches to the paper at right, with signs of age-related wear along the edges. The frame is of a later period. Minor inpainting along the paper’s edges, enhanced at the top right.

Kaaterskill was a steamship built for the Catskill New York Evening Line by Van Loon Magee in Athens, New York. Kaaterskill took her inaugural trip down the Hudson River in August 1882. F. Van Loon Ryder, the preeminent historian of Hudson River steamboats, pointed to the Kaaterskil’s luxurious furnishings, speed, and size to assert that the steamship embodied the “pride of the Line and the flagship of the fleet.”1 The ship accommodated up to 300 hundred passengers and featured 150 staterooms and 73 cabins. The ship’s primary objective was to transport vacationers from New York to the Catskills.

In the 1895 publication that documented the “most famous and historical American steamers,” American Steam Vessels, Samuel Ward Stanton, described the Kaaterskill as one of the “finest Hudson River Night boats of medium size ever constructed. A beautiful model and fine speed. The interior embellishments of Queen Anne style and very handsome sleeping accommodations for 300 passengers. Route, New York to Catakill.”2

Twin brothers, James (1815-1897) and John Bard (1815-1897), were the most noteworthy and prolific marine artists of the mid-nineteenth century. Throughout his oeuvre, James Bard illustrated nearly every steamboat and schooner built or owned around the port of New York. Albeit a self-taught artist, Bard possessed a mariner’s eye that contributed to the regard of his paintings as so exacting that one could almost rebuild the vessel based on his painting alone. The detailed draftsmanship of the ship architecture reinforces why Bard received commissions from the most important maritime merchants, steamboat operators, shipbuilders, and captains on the Hudson River and Long Island Sound as a means to record their ships for posterity. Bard’s paintings not only serve as historical documents of the ships at a time when few visual sources existed, but also express how the ships embodied symbols of speed, beauty, and national advancement that irrevocably altered the country’s economic and cultural geography.

The three other watercolor paintings James Bard executed of this subject are held in collections of the Mariners Museum, Newport News, Virginia; the Shelburne Museum, Vermont; and the John Haskell Kemble Maritime Art Collection at The Huntington Library, San Marino, California.