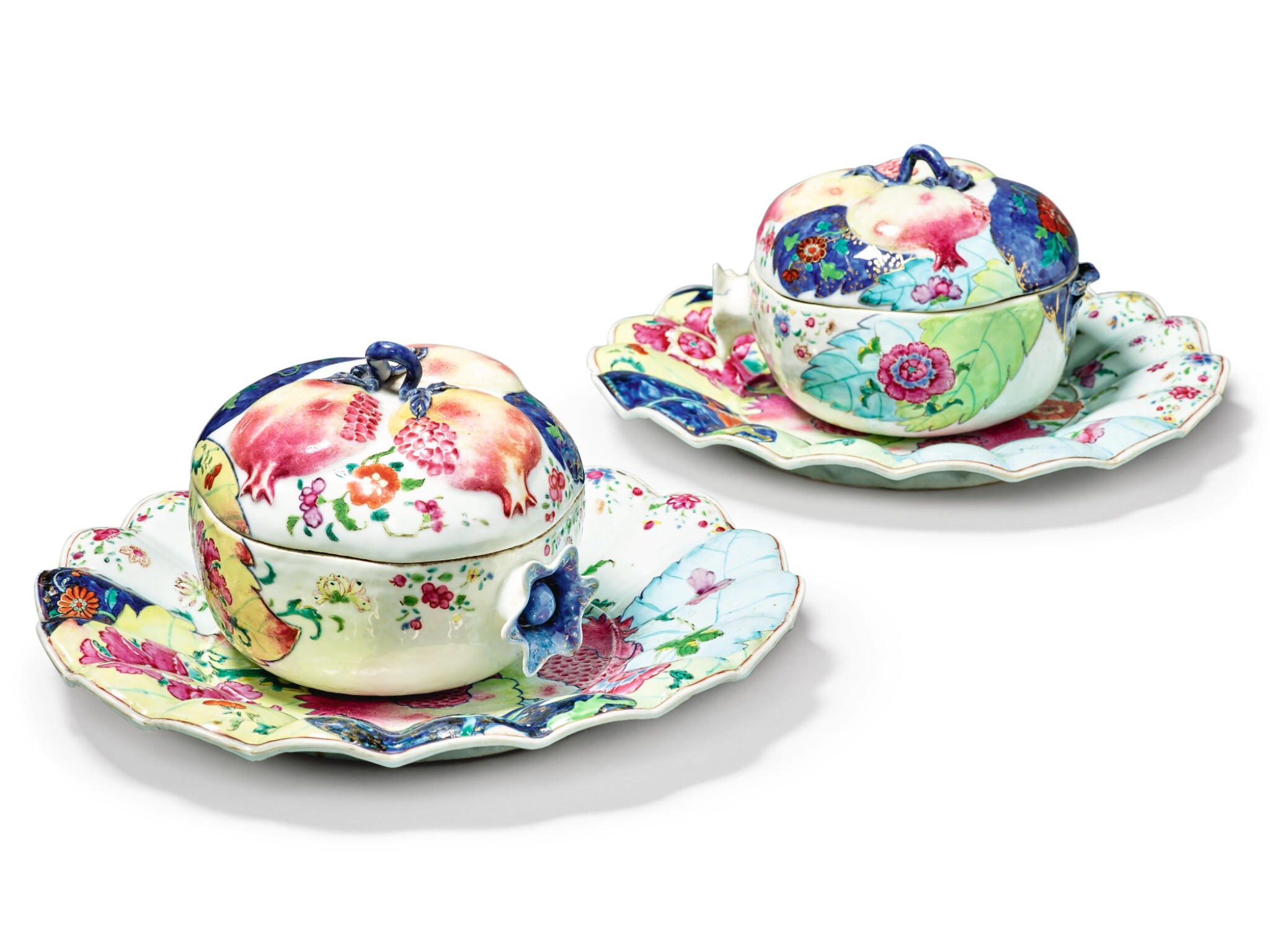 each of circular form and molded with a blue floral handle on one side, painted with yellow and puce flowers in the center surrounded by large turquoise, yellow, blue and green tobacco leaves, the cover painted with three pomegranates culminating in a blue stem-form knop that surmounts the cover, the stands with fluted rims and similarly decorated

One cover and one tureen stand in overall good condition. One tureen with one tip of the star shaped calyx off and restored back on. The other with one tip of the calyx restored losses to another. One cover with an approx. 2 1/8 in. hairline extending from the rim. The other stand in overall good condition but the center enamels have been touched up previously and the restoration has flaked. Overall with minor wear to the surface and minor and expected firing imperfection including very small amounts of fritting to the rim of one stand.

The present examples are a variation of the classic and well known 'Tobacco Leaf' pattern, with the addition of three pomegranates to the central design. The pomegranate symbolizes fertility in Chinese iconography due to its numerous seeds, a rebus for 'many sons'. Along with the Buddha's Hand citron and peach, the three auspicious fruits are often depicted together and known as the 'three abundances'. However, this meaning is unlikely to be understood by the Western audience who ordered these tureens in the 18th century. Pomegranate tureens are also seen with other decorations; one tureen and cover, decorated in 'faux marbre' pattern, was sold in these rooms, January 20th-21st, 2017, lot 4137; another pair complete with stands, decorated with a central panel depicting a pair of pheasants in a fenced garden, sold in these rooms, January 25th-26th, 2013, lot 51.

The present tureens were formerly in the collection of Mrs. Lytle Hull (1893-1976), arts patron, philanthropist and a founder of the New York Opera Company. She was also a trustee of the Metropolitan Museum of Art, New York, and on the board of directors of numerous cultural institutions such as the Metropolitan Opera, New York City Ballet, and the New York Philharmonic Symphony Society.