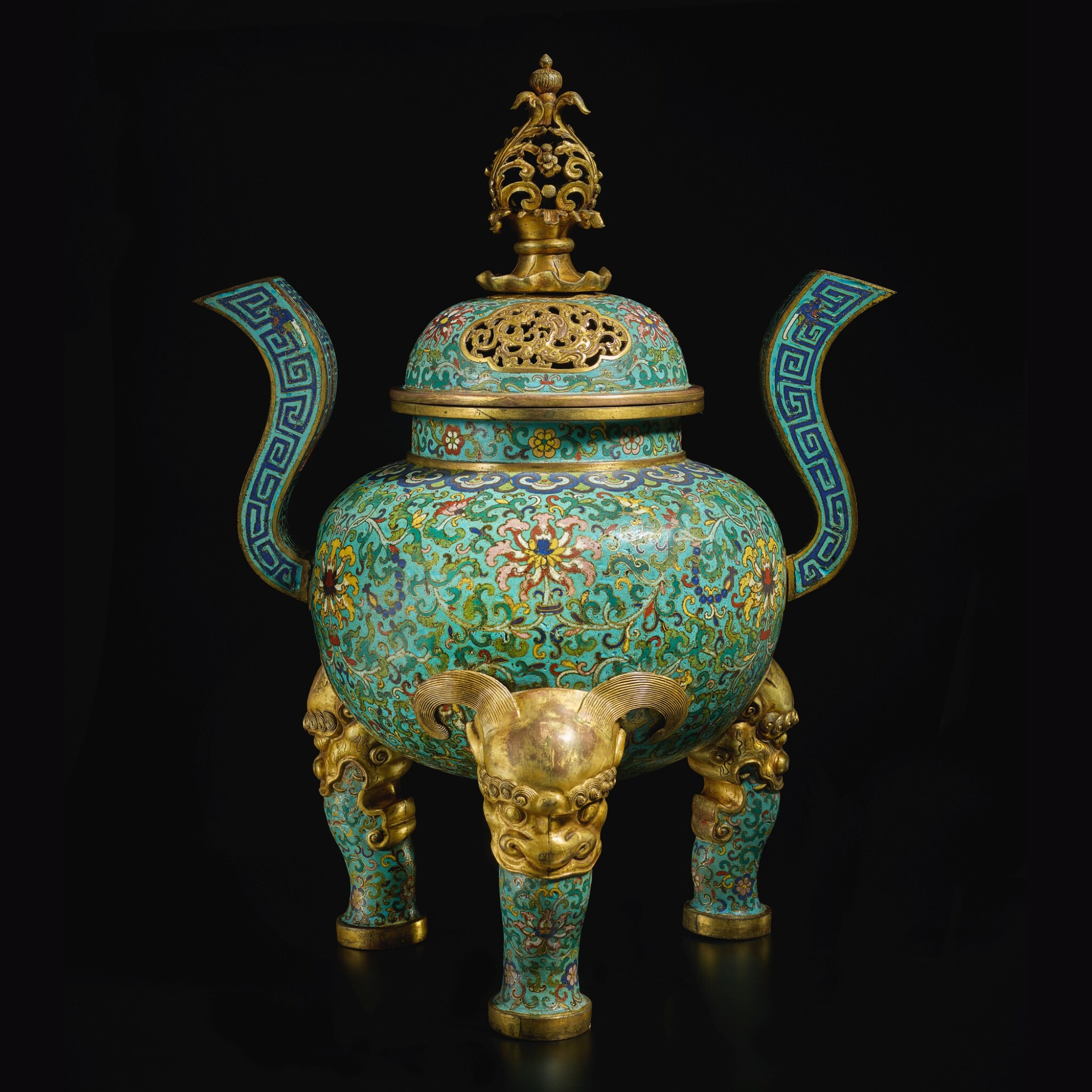 the globular body raised on three cabriole legs issuing from gilt mythical beast masks, rising to a straight neck and everted rim, flanked by two S-shaped rectangular-section handles set to the shoulder, enameled allover with a turquoise ground and colorful lotus blooms, framed by a ruyi band at the shoulder, the neck encircled by a floret border, the legs with further florets and lotus, the handles with kuilong-form square scrolls, the domed cover with a corresponding scrolling lotus motif in cloisonné punctuated by three gilt openwork quatrefoil cartouches enclosing kuilong, the elaborate gilt-metal openwork knop in the form of a lotus bud (2)

This impressive censer represents the apogee of artistic and technical achievement of imperial enamel craftsmanship during the Qianlong reign. Every aspect and execution has been accomplished to the highest standard. The high quality of workmanship is clearly shown by the casting of the mythical mask-form feet, the elaborate pierced knop and the fine details of the cloisonné enamels. The decoration and the choice of colors also reflect the sophistication and confidence among artists to experiment with more unusual designs and color schemes.

The censer is of ding form, based on the shape of archaic ritual vessels of the Shang dynasty. Its cauldron-like shape, standing on three short slightly curved legs, reflects the predilection in the Ming and Qing periods for vessels in the form of archaic bronzes of the Shang and Zhou dynasties. Although the overall outlines of the archaic models were retained, the imperial craftsmen liberally interpreted original decorative motifs, such as the leiwen-inspired keyfret scroll to the handles, incorporating them with more contemporary lotus scrolls to the body.

As a universal monarch at the center of the world, the Qianlong Emperor lent his support to a variety of religious institutions, including Daoist and Buddhist temples, as well as Manchu shamanic shrines and the buildings and altars that housed the so-called ‘State Religion’, the worship of impersonal Heaven. Altar garnitures typically comprise an incense burner, placed in the center, flanked by two candleholders and gu-shaped vases, all placed on tall stools, as seen in a 20th century picture of the Daxiongbaodian of the Tanzhe Temple near Beijing, illustrated in Helmut Brinker and Albert Lutz, Chinese Cloisonné. The Pierre Uldry Collection, New York, 1989, p. 53, fig. 29.